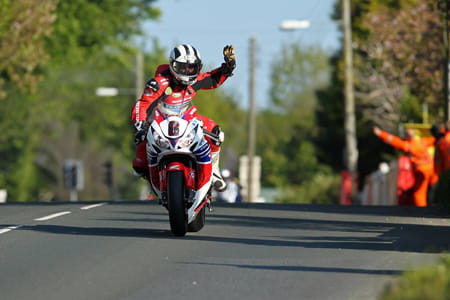 Despite winning four races at this TT, Michael Dunlop has announced he may take a sabbatical from racing in 2014. A few weeks back, Honda boss Neil Tuxworth announced the Ballymoney man would not be with the TT Legends squad for 2014 hinting that Dunlop had refused a number of offers presented by Honda.

The rumour mill then placed the younger of the Dunlop brothers in Shaun Muir’s Milwaukee Yamaha squad. Muir denied this was the plan as he’d already signed Ian Hutchinson and Josh Brookes for the 2014 roads campaign.

Dunlop posted a statement on his Facebook page to confirm he’s not signed a deal for 2014 and is considering sitting the year out ahead of a 2015, or perhaps 2016 return.

“There has been much speculation about my plans for next year and I have decided to let all my loyal sponsors, team members and fans know exactly where I am currently at. I have not signed any contracts for 2014, mainly due to various complications attached to each offer put to me” the statement read.

“I am disappointed to be in this situation, especially after the tremendous season I enjoyed in 2013 and the success I achieved. However, I am as keen as ever to go race motorbikes but sadly at this moment in time I will not be racing in 2014. If something materialises I might consider coming back if am ready and it's the right package but till that I hope to be back in 2015 or if not 2016.”

“I have worked extremely hard to get to this level in road racing and unless I feel I have the right equipment and structure under me I won’t race at all. Thanks to everyone who has supported me through thick and thin there is to many to name but I will see them to express my thanks and I hope we’ll be back on the top step as soon as am back.”