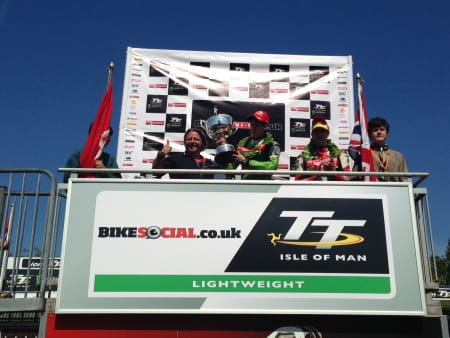 The mood on the grid was relaxed before this morning’s Bike Social Lightweight race. Large crowds surrounded the route in anticipation of what could be a classic day of TT action and the sun beamed down on race-goers for the final day of racing at this year’s event. Some fans would say conditions were perfect; the riders however, may have disagreed.

The main news of the day prior to the first race was Michael Dunlop’s withdrawal from the Lightweight race in order to allow this week’s star performer to focus purely on the senior race. John McGuinness was also on the list of non-contenders, having declared before this week’s racing began that he would not be competing in this morning’s race. Gary Johnson also had to drop out minutes before the start, making him a non-starter due to technical problems with his WK bike; the continuation of a frustrating week for the Lincolnshire rider.

The opening lap was led almost all the way by the first man out on to the course, James Hillier, followed by Dean Harrison, Ivan Linton in 3rd and Conor Cummins in 4th. All four riders decided to pit after the first lap, a decision that paid off well. Hillier kept himself up there through the second lap as did Harrison, while Ivan Linton was eventually squeezed out of his 3rd place by Conor Cummins. James Hillier completed the last lap in 19m 00.168 seconds and smashed John McGuinness’s lap record of 119.13 mph to round off a fantastic race and the win.

Speaking after the race, third-placed local man Conor Cummins, said he was delighted to get on to the podium considering he’d only ridden the bike once in practice. This was Conor’s first podium since a Superstock TT podium in 2010, he said, “….a lot has happened since that Superstock race, I’ve worked very hard on my fitness so I’m delighted to finally be back up here.”

South Yorkshire man Dean Harrison, expressed that he was overwhelmed by his result and that the atmosphere created by the fans round the whole track was amazing.

Winner James Hillier from Bournemouth said he was cautious of the bike’s temperature a lot of the way round and so was delighted to be able to bring it home. When asked about his reaction to the win he said: “I’m a bit speechless, everyone has worked so hard for this so I’m over the moon.”