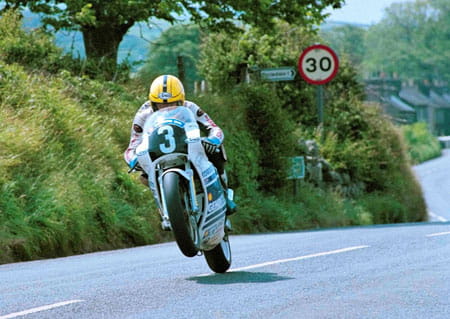 After an incredible inaugural Classic TT (presented by Bennetts) this year, run within the theme of the sixties, the Isle of Man Government Department of Economic Development has confirmed that the 2014 Classic TT Races will have an eighties theme, paying tribute to the legend that is twenty-six time TT winner, Joey Dunlop.

The Classic TT weekend – which is part of a fortnight long Isle of Man Festival of Motorcycling -  will be entitled “Joey Dunlop – Road Racing legend” and will celebrate Dunlop’s career, not just at the TT but also during the F1 World Championship days as well as his career in Ireland. There will be a particular focus on the eighties, the time around the height of Joey’s career.

There are plans to curate an exhibition of racing machines from throughout Joey’s career for what would be a free event throughout the Classic TT celebrations.

There is to be a parade lap sponsored by the Isle of Man Steam Packet company, featuring twenty six of Joey’s biggest career rivals, with appropriate representatives when a rider is unavailable.

Once again the Classic TT weekend will feature two race days, Saturday 23rd and Monday 25th August with the programme again including Formula 1 and 2 machines, a 350cc race and a 500cc race. The popular VMCC Festival of Jurby will take place on Sunday 24th.

"There seems to be an unwritten rule that Classic Racing is just pre-1960's machines but we are looking to change that with the Classic TT” explained Trevor Hussey, Head of Motorsport at the Isle of Man Government Department of Economic Development.  “

“The 1980's not only gives us a rich motorcycling theme but was also a strong cultural decade and we will look to really expand on that."

"It also gives us the opportunity to pay tribute to one of the greatest names in the TT's long history and we are really keen to develop an appropriate celebration of Joey Dunlop's racing career as his name is synonymous with the TT Races."