Waters aims to stay with Tyco Suzuki in 2015 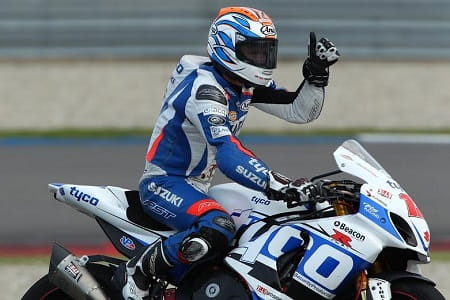 Josh Waters has said he’s keen to remain with the Tyco Suzuki outfit in British Superbikes next season after taking two victories for the team in 2014.

Speaking after storming to his second win of the season at Assen, Waters said he likes it within the Northern Ireland-based outfit and hopes to continue next season. The Aussie put on a master-class in iffy conditions on Sunday as he beat championship contender Ryuichi Kiyonari to victory on the final lap of the first race.

Waters endured a tough debut season in British Superbikes with Milwaukee Yamaha last year and at the start of this season, it looked as though 2014 wouldn’t be much better for the double Australian Superbike Champion. However, since taking his debut victory at a sodden Brands Hatch back in July, Waters has shown strong pace in both wet and dry conditions with a number of impressive top six results topped off with his second victory this past weekend.

“I don’t want to be known as a wet weather rider but I’ll take the victory!” said Waters, talking to Bike Social.  “It was great, I was nervous as before the start of the race as I knew it was gonna dry up but I got lucky that it rained again. What I was happy with is that I could fight back at Kiyo, I didn’t just get to the front in the wet and win I fought with one of the best. Ilike Kiyo! For him to say the nice things he did it makes you feel pretty good. I’m really happy for the team so to get my second win is great, yeah it was in dodgy conditions again but the last few rounds have been good in the dry.

“I hope this is going to help cement my place in the BSB championship next year as things are really starting to come together for me now. The perfect scenario would be to do what I’m doing with Tyco Suzuki next season as I like everybody there. We’ll see how it all pans out.”