The Prodigy's Firestarter, Keith Flint, talks ahead of 2014 season 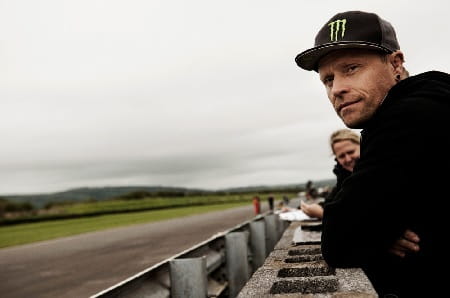 Prodigy front-man Keith Flint has stepped up to the plate in 2014 running his own outfit in the British Supersport series. His squad, named Team Traction Control, will run American James Rispoli in the main Supersport class with Steve Mercer in the EVO category on Suzuki GSX-R600 machinery.

We caught up with the firestarter himself at the recent Donington Park BSB test.

Where does your passion for motorcycles originate?

I grew up with two older brothers who love bikes and I’ve got uncles with a two-wheeled passion too. I’ve been going over to the Manx for years. I’ve always been around bikes and they’ve always been around me! We started with the usual, riding little things around fields and talking my brothers into taking me on the back! I did a bit of racing in ’98 but I had a couple of crashes and got in the way of touring but I came back and had another bite in the last few years doing the Hottrax. We got a fourth there and a first and then got another first in the nationals with Stephen Bentley so it seemed natural to take the team on from there.

You’ve signed a young American talent for the 2014 season, what are your expectations?

We’ve signed James Rispoli for the campaign this year and we’re keeping an open mind, he’s got to learn the circuits but he knows the bike, he’s won twice in AMA on it and he’s clearly got the talent to be up the sharp end. If we’re in the leading pack at the start of the year that would be really good. You have an inner-belief in your riders and the team is really well put together and as racers of course you want to be on the podium but realistically if we can start with fifth/sixth places that would be great.

You appear to be taking a very hands-on approach in running the team, what happens when you go on tour?

As I say, ‘no mon, no fun’. If I’m not out working then the team isn’t rolling. We are well set up for me going away touring and it won’t be any disappointment for me to go away because I love the band and love touring and everything it brings. I’ll be going from one paddock to another, the racing paddock to the musical paddock.

You clearly love both music and racing, if you had to choose one what would it be?

If I had to choose one, I’d stick with the band as it’s been my life but that’s a huge question. Take your two biggest passions in life and split them and put one in the bin, it’d be really hard work for me!

What are the long-term aims for Team Traction Control?

We’re in the paddock for the next couple of years at least, we’ve got a long-term plan and we’re very aware that we are newcomers to the paddock. Obviously Steve Mercer’s raced and a lot of the team are very well known in the paddock so we aren’t complete novices, but we have to enter and doff our caps to the people who have been here years and do our bit to race hard and fit in.

You might be new to the paddock but there aren’t many who won’t know your name, has this helped open doors for things such as sponsorship?

It’s not helped as much as you’d think, it doesn’t open up doors like a skeleton key but what everyone knows is that they’ve seen me in the paddock since the mid-nineties so they know me. The good thing about the paddock is that not many people are bothered about what I do for a living; they are just pleased to see somebody new in the paddock that is passionate about their bikes and riders. I’d do anything for James and Steve, within the rules, to help them get further up the pack. I have a responsibility but I’ve got a lot of friends here, which is great if you’re going to be coming to an environment and spending four days in what’s sometimes a rainy car park – it’s nice to be able to have a laugh and a brew with some mates!

You’ve done a bit of racing yourself in the past, is there no desire to get back on the bike?

You can keep up with the progress of Team Traction Control on Twitter: @Keith_Flint_TTC