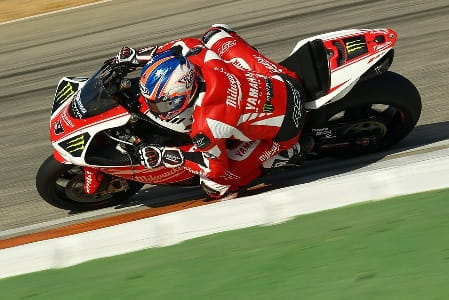 Josh Brookes has said he feels he is in the strongest position he’s been in to fight for the British Superbike title this year after a switch to Shaun Muir’s Milwaukee Yamaha team.

Brookes has fought for the title in the showdown each season for the last four years and despite finishing second twice, the Aussie has never managed to get his hands on the trophy. After a few complaints about a lack of performance on Suzuki’s GSX-R1000 last year, the thirty year old jumped ship to the Yamaha camp for 2014 and is looking strong with one test to go before the season starts.

Arriving at Donington Park after two tests in Spain early last month, Brookes had clearly gelled with the Yamaha R1 as he led the timesheets for a large part of the day, only to be pipped by Shane Byrne in the closing moments of the final session.

“So far testing has been almost perfect!” Brookes said, speaking to Bike Social at Donington Park.

“I'd have liked to have finished top spot today as I spent most of the day in P1 and with a couple of minutes to go Shakey put in a good lap, which fair play to him he's done a good job!

“In the grand scheme of things we're in a really good position, we're doing really good laptimes and my best lap of the day was on lap eleven of the tyre. Sometimes you will put a fresh tyre in just to do that one lap as a couple of laps later the tyre drops off so the fact that we can do a number of laps on a tyre and still be putting in good lap times give the team confidence going into the races and racing's what we are here for.

“It doesn't really matter about the qualifying or a one off lap it's the race that counts. I want to go into the first round and have some good races, bag some podium credits and at the moment we stand in good form to do that.

“The bike is quite different to the Suzuki from last year, mainly in performance. I've hardly made any changes to it in testing, we've gone up and down with the spring rate and played up and down with the link but that's been more about going to different tracks. We've been to two circuits in Spain and now we're at Donington and they're all very different circuits and the good thing is we've been tailoring the bike to each circuit rather than tailoring it around me. That's because in reality, I'm quite well suited to the bike, it seems to be a good all round package and at the moment I'm making it work.

“I've always felt prepared ahead of a season but if you take the the bike, team and whole package into consideration it would seem at this stage I'm in the best position I've been in yet to finally take that championship!”