One apiece for Byrne & Kiyonari at Silverstone 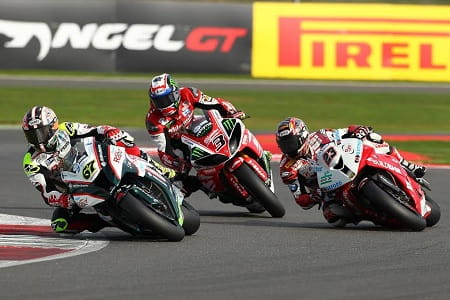 The gap between Shane Byrne and Ryuichi Kiyonari remains unchanged after Round 11 of the British Superbike Championship with both riders leaving Silverstone with a victory and second place apiece.

With the sun shining, Kiyonari took the holeshot in the first race ahead of Shane Byrne and Josh Brookes with an immediate gap forming back to Chris Walker in fourth. John Hopkins poor season continued as he crashed out on the second lap.

Jon Kirkham lead an eight bike train from fifth to twelfth but the Halsall Kawasaki lost out to Dan Linfoot on the fourth lap leading the charge for Waters with Josh Waters also progressing through the pack.

After four laps of maintaining position, battle got underway among the leading trio as Brookes pushed hard on Byrne for second spurring the three-time champion to take a look underneath Kiyonari into Stowe.  Kiyonari re-took the lead on the next lap into Vale with Brookes then looking for a way around Byrne.

With the race looking too close to call, Byrne slipped into the lead at Village on lap nine to begin a titanic battle with the Buildbase BMW; the pair swapping position almost every corner with Brookes sat patiently behind.

Chris Walker dropped through the pack from fourth to eleventh with two laps to go as the battle at the front intensified. Byrne barged past Kiyonari into Stowe before the BMW came back into Vale. Brookes lunged up the inside in an attempt to take second from Byrne in the arena section but the Kawasaki man was having none of it.

Byrne lead into the final lap with Kiyonari strong into the first turn, getting the drive to slip past into Maggots. Byrne pushed hard on the BMW in the area section with the pair coming onto the Wellington straight two abreast. Latest on the brakes, Byrne took the lead into Brooklands and held his line around the final complex to take his eighth victory of the year. 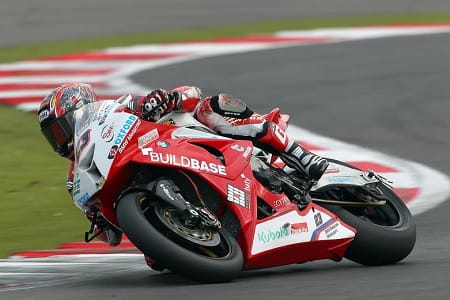 Byrne took the lead early in race two ahead of Brookes, Kiyonari and Ellison and looked to be pulling away until Kiyonari passed Brookes into the first turn. The Buildbase BMW man had taken the lead by the time the pack had reached Stowe. The leading trio soon gapped the battle for fourth between Bridewell, Ellison and Waters.

The remnants of Josh Brookes’ championship chances were thrown away as he crashed out of third on the sixth lap. This left Byrne with no pressure from behind enabling him to sit on the back of Kiyonari until he was ready to make his move, which came on the penultimate lap but didn’t quite work out as he went wide allowing the BMW back through. Byrne looked to repeat the move on the final lap but expecting it, Kiyonari kept a tight line. Having learned from the first race, Kiyonari defended into Brooklands before holding the line around Luffield and Woodcote to take victory by 0.074 seconds.

James Ellison made a welcome return to the podium in third ahead of Tommy Bridewell with Josh Waters and Stuart Easton rounding out the top six. Dan Linfoot was the fourth title fighter in seventh ahead of Honda’s Julien Da Costa, Peter Hickman and James Westmoreland.

Byrne’s championship lead remains 12 points over Kiyonari with the duo now the only riders with a shot at the title at Brands Hatch in two weeks.