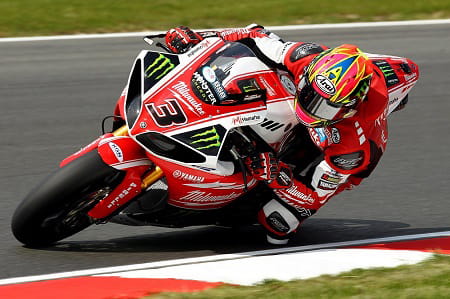 Despite hinting that a move to WSBK is on the cards for 2015 to fans at Brands Hatch yesterday, Josh Brookes has admitted to Bike Social today that he “hasn’t yet been speaking to any teams” suggesting that he feels his best chance of stepping up in class will be with the Milwaukee Yamaha team he currently rides for in BSB.

When asked about his team’s plans and whether he intends to remain with them, the Australian was reluctant to discuss the options, saying that he has “said all he wanted to say about his future career at the moment” and “hadn’t yet confirmed whether the World Superbike Championship or road racing would be his focus for 2015.”

Regardless of intentions and desire, there’s no doubt that a move back to WSBK after a long BSB campaign could be difficult for the 31-year-old. He has now spent six years in the domestic series and has become embedded in the championship.

At a similar age and point in his career, current BSB title rival Shane ‘Shakey’ Byrne tried his hand at the world series in 2009 and 2010, but failed to make any big impressions. A best placing of 2nd at Misano was a high point for the Brit, but it wasn’t enough to keep his seat in the ultra-competitive paddock. With Shakey almost 80 points ahead of Brookes in the domestic series, it doesn’t look likely that WSBK teams will be chasing Brookes as hot property for 2015.

Coupled with that, team boss Muir has previously spoken about his desire to “graduate up a class”, so could this be the opportunity Brookes is hinting at – particularly if he’s not yet speaking to any other teams?

With future road racing campaigns not yet being ruled out though, following Brookes’ recent podium success at the North West 200, it seems that he is very much keeping his options open and seeing where his current team can take him.