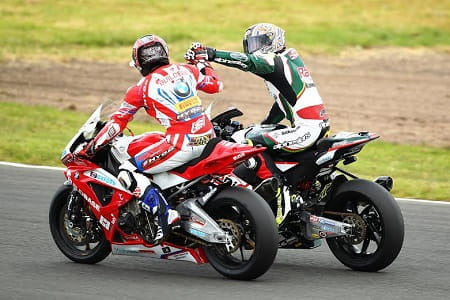 Ryuichi Kiyonari was elated with his first race victory at Knockhill this weekend, the first time the Japanese rider has stood on the top step since Snetterton in 2011.

The Japanese rider stormed to BMW Motorrad’s first ever victory in the British Superbike Championship yesterday, crossing the line over five seconds ahead of his closest rival. After a tough couple of years, Kiyonari was the man to beat around the 1.3 mile Knockhill circuit and after securing pole position on Saturday he was a strong candidate for victory in Sunday’s two encounters.

A mistake towards the end of the second race saw him lose the lead to Shane Byrne and miss out on a double victory by just 0.176 seconds.

The double podium is a welcome result for Kiyonari, who had been doubted on the British Superbike scene after three win-less years. The three-time champion left Honda to ride for a new manufacturer for the first time in his career for 2014, a move that has seemingly paid off.

“I was very nervous before the race because I had a crash in warm-up this morning” said Kiyonari.  “It was a big mistake and I lost my confidence. I was nervous at the start but once we were going everything was good. I kept going, putting in the laps and I finally won again!

“I was disappointed not to win the second race after missing a gear at the hairpin but I’m happy with a double podium. Shakey is very fast so I just tried to follow him and then I passed him but made a mistake and after that it was almost impossible. I made quite a few mistakes so it was my fault but next time I’ll do my best to win again! Brands Hatch is my favourite track, it’s not easy but I’ll try my best to get a podium or maybe another victory.”