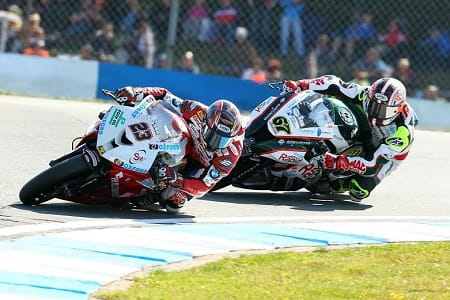 Ryuichi Kiyonari made up for his two DNFs at Cadwell today by storming to a dominant double victory ahead of Shane ‘Shakey’ Byrne in the final round of the British Superbike ‘main season’ at Donington Park.

Shane Byrne took the holeshot into Redgate ahead of Kiyonari and Stuart Easton who made a cracking start from the second row. Starting from pole position, John Hopkins had a nightmare as he was swamped by the pack leaving him in sixth place.

Bimota’s Christophe Ponsson highsided at Goddards at the end of the first lap, collecting TAG Kawasaki’s Mitchell Carr bringing out the safety car while fuel was cleared from the track.

The safety car pitted two laps later with Byrne controlling the restart. A mistake for Stuart Easton on the Craner Curves saw him slip back to fourth position behind Josh Brookes.  John Hopkins crashed out on the seventh lap at the Melbourne loop.

The man on the move was Milwaukee Yamaha’s Tommy Bridewell, passing Stuart Easton for fourth on the twelfth lap before barging past team mate Josh Brookes to assume the final podium spot.

After stalking him for twelve laps, Kiyonari finally made his move on Byrne into the Fogarty esses but the Rapid Solicitors Kawasaki man came straight back into the Old Hairpin. A copycat move saw Kiyo re-take the lead a lap later, prompting Shakey to then pull the same move he’d pulled a lap previous. Unfortunately for the Kent man, he ran slightly wide allowing Kiyonari to pull a brave pass into Schwantz curve.

Kiyonari controlled Byrne on the final lap, riding defensively in all the right places. Even a last corner lunge from Byrne at Goddards couldn’t topple the BMW man. Bridewell completed the podium ahead of Josh Brookes and Stuart Easton.

Josh Waters finished sixth taking the fastest lap ahead of Peter Hickman and Dan Linfoot, whose result was enough to secure him in the title fighter showdown. 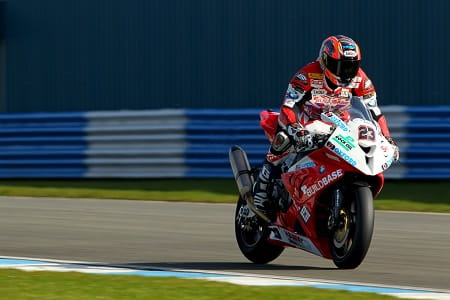 After winning race one, it was Ryuichi Kiyonari first into Redgate corner as the second outing got underway, the BMW man followed by the PBM pairing in the unusual order of Stuart Easton and Shane Byrne.

Josh Waters got away from pole position in a similarly unimpressive fashion to that of his team mate in the first race, dropping back out of the top six by the end of the first lap as Josh Brookes charged through from the second row.

Tommy Bridewell crashed out of the top six at the Craner Curves on lap seven ending hopes of repeating his first race podium.

Having been glued to the back of Stuart Easton for twelve laps, Josh Brookes finally found a way underneath the Scotsman at the Old Hairpin to take third position before setting the fastest lap of the race chasing down the battling duo two seconds ahead.

Recovering well from his disastrous start, Josh Waters took fifth from Julian da Costa on the fifteenth lap but with a five second gap to Stuart Easton ahead his focus turned to cementing position.

Bettering Brookes’ quickest time on the penultimate lap, Kiyonari had half a second on Byrne into the final lap leaving Byrne with no choice but to cross the line second ahead of Josh Brookes. Stuart Easton took a solid fourth position ahead of Josh Waters and Julian Da Costa. Winner last time out, Peter Hickman finished seventh ahead of James Westmoreland with John Hopkins and Chris Walker rounding out the top ten.

Byrne’s championship lead has now diminished to a mere 26 points ahead of Brookes and Kiyonari as the showdown rules come into play.