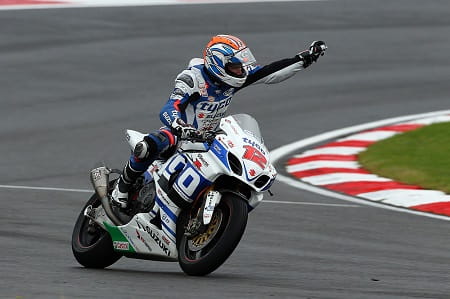 Josh Waters took his debut British Superbike victory in wet conditions at Brands Hatch this afternoon after a stunning battle between Ryuichi Kiyonari and Shane Byrne in the first race earlier in the day.

There was drama from the off in race one as Tyco Suzuki’s John Hopkins stalled on the grid. A second warm-up lap was called as other riders machines began to stall in the long wait as Hopper tried to restart his machine. Race distance was reduced by a lap and Hopkins was demoted to the back of the grid for the restart.

Local man, Shane ‘Shakey’ Byrne took the lead into the first corner ahead of the GBmoto Kawasakis of James Ellison and Chris Walker. Kiyonari made a great start from the second row of the grid, shooting into fourth into the fourth corner ahead of Josh Brookes, who had an equally good, if not better, start from eighth.

With the GBmoto boys pushing Shakey hard from the off, it looked like we’d be in for a good race. Chris Walker went up the inside of his team mate  at Surtees as Ryuichi Kiyonari latched on to the back of the top three.

Barry Burrell crashed out at Druids on the fourth lap, bringing out the Nissan GT-R safety car as the debris was cleared. The race resumed two laps later, with Byrne still in the lead ahead of Walker, Ellison and Kiyonari.

Desperate to get back ahead of his elder team mate, James Ellison went in hard on Chris walker on lap eight initiating quite a battle between the pair. Pushing hard, the pair came together on the eighth lap but it wasn’t enough for Ellison to get past. Ellison eventually passed his team mate a lap later.

Kiyonari’s harder tyre proved useful on lap nine as he made a move on Walker to take third place. As would be expected, the olden goldie fought back hard. Kiyonari secured third position at Druids as Quattro Kawasaki’s Dan Linfoot moved into fifth ahead of the battling Yamahas of Brookes and Bridewell on the tenth lap.

Looking to make a move, Ellison got the drive on Byrne along the back straight but Byrne was much later on the brakes. The Cumbrian did take the lead crossing in to lap thirteen but not for long as Byrne shot back underneath into paddock hill bend. Ellison’s chances looked over as Kiyonari took him for second on the final lap.

For the final five laps, Kiyonari and Byrne were at loggerheads for the victory, with Kiyo taking the lead into clearways on lap 14. Swapping positions and almost paintwork, Byrne and Kiyonari began to pull away from Ellison as it became a two-man battle for the win. Keen to lead into the last lap, Shakey re-took the lead into Hawthorns on lap 18 but Kiyonari was straight back on the Kawaski man. A defensive line from Kiyonari on the final lap saw the BMW man cross the line to take his second race victory in three races.

Byrne was forced to settle for second ahead of James Ellison and Chris Walker. Dan Linfoot 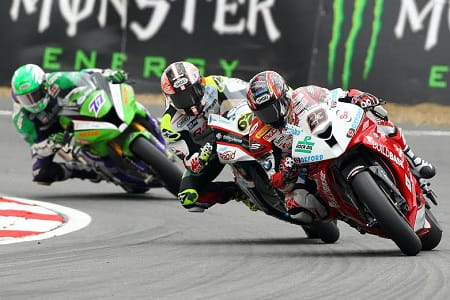 Byrne led into the first corner once again in the second race but Kendal’s James Ellison took over at the Druids hairpin. Race one victor, Ryuichi Kiyonari settled into third place. Drama soon hit as James Ellison suffered a huge crash into Hawthorns, with second placed Byrne missing the stricken ZX10-R by inches. Race organisers tried to deal with the clear-up under safety car conditions but a fuel spillage from the crash saw the red flag drawn a lap later.

With dark clouds ahead and a storm brewing in the distance, the remaining laps got underway after a quick-restart but the safety car was brought out after a sharp shower over half the circuit. Howie Mainwaring fell from his Quattro Plant Kawasaki after what appeared to be fluid leaking from the bike.

Lightning lit up the skies and thunder rumbled as the race was started for the third time. It was Byrne leading into the first corner again from Kiyonari, Easton and Walker. Richard Cooper slipped into third as a couple of riders were out of their seats into Surtees. Australian, Josh Waters also capitalised on this moving up to fourth pace.

Kiyonari took the lead into Surtees on lap two as Richard Cooper looked under three-time champ Shane Byrne, a move he secured into the third lap. Josh Waters was making progress as he moved in to podium contention. A rookie to BSB in 2014, Richard Cooper shot into the lead on the third lap but Aussie Josh Waters slipped into second and began to chase the Kawasaki down.

Waters took the lead on lap four and immediately pulled the pin on those behind. Chris Walker had settled in to third place behind Richard Cooper but the Nottinghamshire man ran on at Surtees on lap seven.

Another new face at the front was Keith Farmer among a tough battle for second place with Cooper, Walker and Byrne. Farmer made up two places on lap second to begin the chase down on Waters.

Ryuichi Kiyonari retired from the race with technical difficulties as Bridewell joined the battle for 7th. Josh Brookes ruined his chances of a decent result running on at Surtees, as fellow Aussie Josh Waters dominated six seconds ahead of the pack.

With both never having finished on the podium, Farmer and Cooper battled it out for second before Cooper found his pace and managed to pull a gap. Waters crossed the line to take his debut British Superbike victory by six seconds with both Cooper and Farmer enjoying their first ever podiums. Tommy Bridewell was fourth ahead of Shane Byrne with Halsall Racing’s Jon Kirkham in sixth.