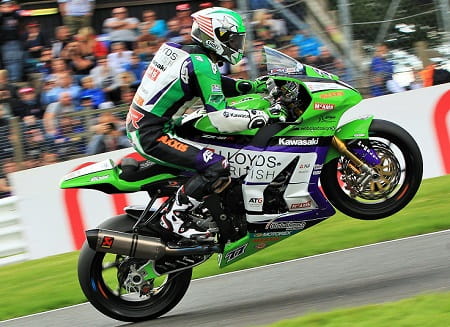 James Ellison has withdrawn from the Cadwell Park round of the British Superbike Championship after finding the physical Lincolnshire circuit too taxing on his recently fractured kneecap.

Ellison broke his femur and fractured his kneecap in a crash at Brands Hatch just over a month ago but after an incredible recovery, the Kendal man vowed to at least try to ride at Cadwell Park to see whether he’d be in a position to secure a spot in the all-important title fighters’ showdown.

Passing medical tests earlier this week, Ellison made a promising start to his return setting the tenth fastest time in first free practice. Things soon went downhill from there with the Kendal man struggling to change direction on his bike.

GBmoto team boss, Mark Smith-Halvorsen told Bike Social on Saturday morning that Ellison would make a decision on whether to ride in qualifying and just after a couple of laps in the first qualifying session the Cumbrian pulled in before announcing on the circuit PA that he’d not complete the weekend.

Having already missed two rounds, this all but rules Ellison out of a place in the title fighters’ showdown but he’s keen to put on a show when he returns to full fitness nonetheless.

“After working so hard to get back here, I’m devastated to not be able to race tomorrow” said Ellison.

“The weekend started really well and I felt quite comfortable in the first session, but unfortunately things have gotten progressively worse from there and not only am I in a lot of pain from my knee but I’m really struggling to change direction on the bike. It’s for that reason we’ve made the decision not to race tomorrow as I can’t risk another injury.

“Languishing down in 20th isn’t where I should be or where the team should be, so with the Showdown now an unrealistic possibility, I’m going to focus on getting myself fully fit so we can all end the season on a high. I’ll be back trying again at Donington but I just want to say a massive thank you to all the fans who’ve supported me this weekend – they’ve made a huge difference and I’m just sorry I couldn’t put a show on for them all tomorrow!”