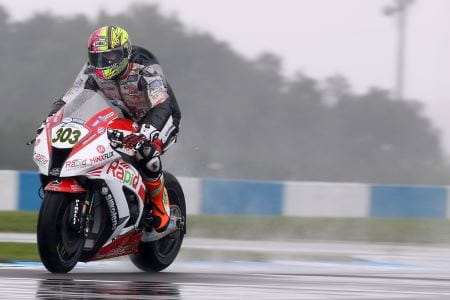 Despite being a late starter to road racing, Keith Farmer stunned the British Superbike paddock as he stormed to victory in the Superstock 600 and Superstock 1000 classes consecutively. Moving up to the main Superbike series in 2013 with Paul Bird Motorsport as the team mate to 2012 champion Shane Bryne, Farmer had a tough year.

Things started well for him, taking a number of strong top ten finishes in his first few races despite a number of crashes. However it soon started to go wrong, as Keith began to find that he was struggling with a lack of energy while riding. A visit to the doctor ruled him out of the rest of the season, leaving him in a difficult position. We caught up with Keith to discuss what went on last year and his plans to return to the championship this April.

“I was probably my own worst enemy as after one good result I expected more and more, putting too much pressure on myself and started stressing myself out expecting moreand that was the main cause of last year. I became ill; I was pushing myself too hard, training too hard and generally trying too hard.”

Farmer admits the step from the Superstock 1000 category up to British Superbikes was a lot tougher than he expected:

“It was a big step going from Superstock 600 to Superstock 1000, don’t get me wrong, but the step up to BSB after that was huge. We didn’t have it easy in the Superstock 1000 class in 2012, racing hard against Jason O’Halloran, there was tough competition!”

“The best way to describe the jump to BSB is going from the boy’s class to the men’s class. Everyone has that bit more experience, they ride in a calmer manner and don’t give you an inch, you have to fight for every single position. That was the biggest challenge I found in BSB as I didn’t expect it to be as fast. The guys in BSB are just so fast, look at Alex Lowes, he won the championship and now he’s topping World Superbike tests. BSB is a tough class.”

He returns to the British Superbike series this year with PR Kawasaki, and he’s confident he’s found himself a good deal.

“I spoke to quite a few teams over the winter, including higher-profile teams than PR Kawasaki but when I first went and met with John and Julian from PR just before Christmas I knew within a few hours of meeting them that it was the team for me.”

“They’re just like my family; they were brought up the same way and have worked hard throughout their life. They don’t have a massive amount of money in the team but they get by and that’s the way I was brought up! I think it’s good because there isn’t as much pressure. Every team will expect certain results, that’s just fact but PR’s results sound more realistic to me. It was a relief for us to be able to talk and understand each other. “

Farmer says that this year, his aim is simple:

“This year I think we’re going to worry about finishing each race, whether we get 25 points or 1 point we’re going to be there to finish this year and I think that will leave us a in a better position. Look at Kiyonari last year, he didn’t have the best results but he plodded away and ended up in the showdown, it’s the same with James Westmoreland too.”

“We aren’t setting ourselves any targets, we’ll go out and as long as we’re progressing we’ll be happy. As long as I see the team trying and the team see that I’m trying then we’ll both be happy.”

And he’s feeling in good shape:

“Last year I could have ran long distances all the time but when I got on the bike I was knackered after ten minutes so I’ve told PR I want to be on a bike as much as possible to be bike fit. It should be a good year and I’m thinking positive!”