Byrne: "The difference between second and first is what we go racing for" 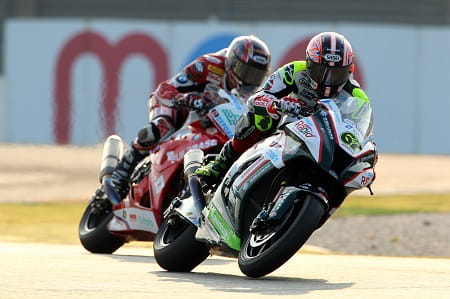 Shane Byrne has said that his showdown starts now after almost throwing away his British Superbike Championship lead this weekend in Assen.

The Rapid Solicitors Kawasaki rider crashed out of third place in iffy conditions in Sunday’s first race but managed to salvage the weekend by stealing victory from Ryuichi Kiyonari into the final chicane.

Byrne’s race one crash saw Kiyonari reduce the championship lead from 26 points to just seven but the extra five points gained by the Kent man in the second outing saved him from losing the overall lead.

Having been beaten by Kiyonari twice at Donington, Byrne stalked the BMW man throughout the race waiting until the very last lap to make his move, slipping underneath into the Gert Timmer chicane.

“To someone as nice as Kiyo it’s almost cruel to take a win like that” said Byrne after the race. “It underlines my respect for both of these guys, I knew if I passed him earlier in the race then I’d have a battle on my hands and the chances are it would be him doing that to me in the last chicane. I’d looked at the move quite a few times and I thought he was a bit stronger than me into the chicane but the last lap came and I knew if I was really close I could have a shot, my speed on him through turn fifteen was a bit faster and I used that. I pinned the throttle and thought it’d either stick and I could pass him or I’d be going to the moon, fortunately it stuck and I managed to get past him.

“I know how he feels, I’ve been in this situation before. He led every single lap, I thought in the beginning that he was maybe taking it a bit easy as when I got to second the lap time wasn’t that fast. I knew I could go faster and he started to have a few little moments so I considered passing earlier as I knew Bridewell was coming but Kiyo is so strong I knew if I passed him it’d make it difficult for the rest of the race so I played my cards close to my chest and pipped him on the last lap! You only have to lead over the line. 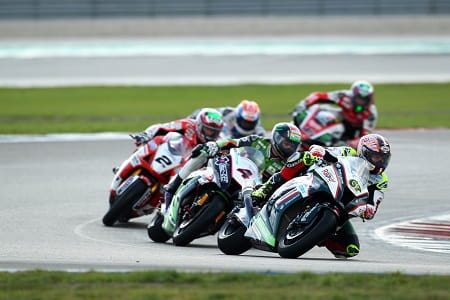 “We rode together this morning in warm up and our pace was a little faster but I knew roughly where I was strong and where he was strong. When he got to the front early on and I was in fifth or sixth I thought “oh no he’s going to clear off!” so I’m glad I managed to catch him."

Had Byrne remained in third position in the first race, he could be heading to Silverstone with a 27 point advantage but throwing it down the road means the Briton now leads the Japanese rider by just 12 points with 125 left on the table. The crash marked Byrne’s first DNF of the season.

“The first race was far from ideal. Two weeks ago I lost a 100 and something point lead and came here with a 26 point lead which I then threw up the road. It’s funny as I’d just decided that a third was much better than a crash and at that exact moment I went down. It was off the throttle, the bike just came round and there’s absolutely nothing you can do in that situation. It devastated me, I knew something had to change.”

Having not stood upon the top step for twelve races, Byrne’s race two victory was long overdue and now he’s finally beaten Kiyonari once, the game should be on for the title at the final two rounds at Silverstone and Brands Hatch

“I’d like to say that my showdown starts now, it’s been a long time since I won a race and I’m well aware of that. I’m sure Kiyo will tell you the difference in that one position is massive. I’ve had a load of seconds and a load of thirds and while rostrum finishes are great and my consistency has been good the difference between second and first is what we go racing for. It’s the feeling that you crave, the one you want every time you get on your bike and now I’ve got it back I hopefully won’t lose it by Silverstone.”