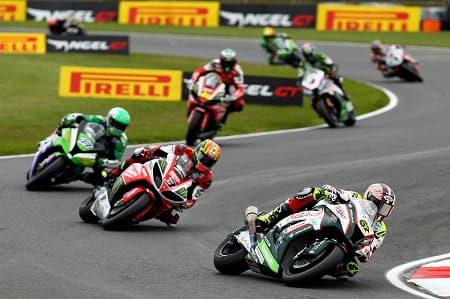 Shane Byrne extended both his championship lead and podium credit tally with a dominant double victory at Snetterton this weekend. The Sittingbourne rider showed sublime pace throughout with his main rival, Josh Brookes, having to push so hard to keep up he made mistakes in both of the day’s outings.

It was drama at the start of the first race as Honda wildcard Julian Da Costa and Ducati’s Jakub Smrz clashed heading into the gravel. Michael Rutter and Ben Wilson also went down on the first lap, causing the safety car to be brought out while marshals cleared the debris.

The Nissan GT-R pulled into the pits at the end of lap three, as Shane Byrne set off from the lead with Brookes and Ellison in tow. The top three maintained position, with Tommy Bridewell in fourth closing in on them towards one thirds distance.

It was a strong start for BMW’s Ryuichi Kiyonari, who took fifth from Dan Linfoot on lap seven as things started to heat up at the front, with James Ellison taking second place from Josh Brookes the following lap. Brookes looked to get back through on the GBmoto rider but the Kawasaki seemed to have the legs over the Aussie’s Yamaha R1. With this pair battling, Byrne began to gap his competitors as the order settled for another couple of laps.

Eager to reel Byrne in, Brookes passed Ellison into the chicane on lap eleven and began to eat into Byrne’s lead. By the final lap, the Aussie had caught Byrne and looked to make his move. Pushing hard, Brookes ran onto the dirt giving Byrne enough breathing space to cross the line. Brookes managed to salvage second place ahead of Ellison, who maintained his 100% podium record this season in third. 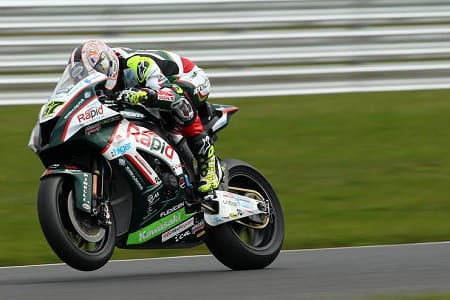 Tommy Bridewell finished fourth ahead of Kiyonari while Chris Walker came out the best in a four way battle for sixth ahead of Linfoot, Muff and Hopkins. The second Tyco Suzuki of Josh Waters rounded out the top ten.

Josh Brookes took the early lead in the second race but made a mistake in the third corner allowing Shane Byrne and Tommy Bridewell though. Keen to prevent Byrne opening a gap, it didn't take Brookes long to re-pass his team mate and set after the Kent man.

Ellison moved into fourth position on lap four ahead of Kiyonari, with Walker and Da Costa close behind. Shattering the lap record to catch up with Byrne, Brookes took the lead at the end of lap seven but the three-time champion fought back. The pair exchanged position repeatedly over the next few corners before Brookes conceded, instead opting to sit behind the Kawasaki.

Pushing hard to stay with Byrne, Brookes crashed out of contention with a highside on lap twelve. With Byrne out front alone, attention was turned to the battle for second place between Tommy Bridewell and GBmoto's James Ellison. Ellison made a move on Agostini's but lost out as he went wide, giving the Milwaukee Yamaha the advantage. Ellison re-took second at the chicane into the final lap and with superior pace managed to gap Bridewell to cross the line a second ahead of the Milwaukee Yamaha. Byrne took victory, some three seconds further up the road.

Kiyonari had a strong ride to fourth place ahead of Honda's Julian Da Costa with Dan Linfoot rounding out the top six. Jakub Smrz took seventh ahead of Richard Cooper and FFX Yamaha's Ian Hutchinson.