Byrne on top as Spanish testing draws to a close 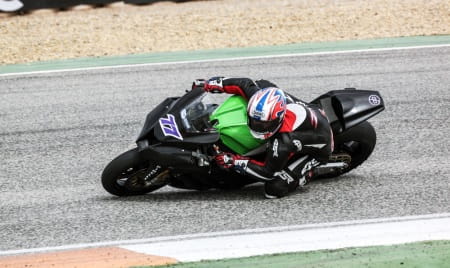 With the British Superbike season now less than a month away, a number of riders have been out in Spain this week finalising preparations for the 2014 season. A few teams made their Spanish excursion earlier this month, while others have opted to make use of the good UK weather and save a few bob meaning just eight British Superbike riders were present at this week’s test at the Almeria circuit in south eastern Spain.

Despite it being his first outing of 2014, Shane ‘Shakey’ Byrne unsurprisingly topped the timesheets over the three day test, some nine tenths faster than his team mate, Stuart Easton who set the second fastest time on his Rapid Solicitors PBM Kawasaki. The Scotsman had a tough start to the test though, with a crash on the first day totalling his ZX10-R.

The test was very much a Kawasaki affair, with only one rider present not powered by the Japanese manufacturer; Martin Jessopp on the Riders BMW. Quattro Kawasaki’s new boy Dan Linfoot set the third fastest time, just a fraction off Stuart Easton in second place. Chris Walker came out on top of the new GBmoto Kawasaki team, around a tenth faster than his fifth placed team mate James Ellison.

Howie Mainwaring on the second Quattro Plant Kawasaki set the sixth fastest time, ahead of Jessopp on the S 1000 RR. Brazilian rider, Rhalf Lo Turco was also present at the test but some six and a half seconds off the pace set by three-time champion, Byrne.

Meanwhile back in the UK, Ryuichi Kiyonari saw his first outing on the Buildbase BMW on Wednesday. The former champion was reportedly flying during a test at the newly reopened Mallory Park. He was joined by BSB team mate and BMW’s roads rider Michael Dunlop, who will also make a couple of appearances in British Superbikes this season.

The 2014 test schedule now moves back to the United Kingdom, where most, if not all, British Superbike teams will assemble at Donington Park on Tuesday for the first of two official tests ahead of the season getting underway at Brands Hatch on Easter weekend.