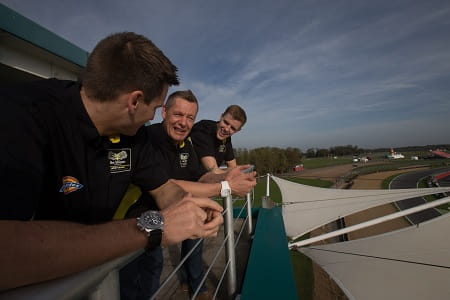 Tommy Hill’s new-for-2015 British Superbike team will combine youth and experience in its rider line-up as the former 2011 champ pens deals with Danny Buchan and Chris Walker for next season.

The team will run Kawasaki ZX10-R machinery familiar to both riders with support from Kawasaki UK.

This year, Buchan dominated the Superstock 1000 championship winning 8 out of a possible 12 races aboard the Tsingtao WK Bikes Kawasaki. The Essex lad has ridden in the Superbike class before, achieving a best result of 4th place first time out with Nick Morgan’s MSS Kawasaki squad at Cadwell Park in 2012. A tough season with Quattro Plant Kawasaki last year led him back to Superstock to prove a point.

British Superbike veteran Walker has a long standing relationship with Kawasaki. He took his only World Superbike victory with the Japanese marque and he’s ridden the current ZX10-R model since its debut in 2011 and has a close relationship with Kawasaki UK. It might have been well over a decade ago that Walker last came close to a British Superbike title, but the 43 year old sure ain’t slowing down with old age. In 2014 he finished on the podium three times and made it into the all-important showdown top six.

The duo have lined up together on Kawasaki machinery before, both riding for Bournemouth Kawasaki in 2013 before Buchan split with the team after a difficult start to the season.

Hill, who won the British Superbike Championship for Yamaha in 2011, retired from racing after the 2012 season. 2014 will mark his full time return to the paddock in a managerial role within the Be Wiser Kawasaki Team.

"I feel really happy to be back in the Superbike Championship and I believe that after the season I have had in Superstock that I deserve this opportunity" said Buchan. "The experience last year in the Superstock class has really helped me with my race craft and every time you get on a bike you are learning.

"To come back and ride the Superbike again with a competitive team was what I hoped for in 2015, so I am really excited and can't wait to get started.  It is great to be a part of a new team, but one that also comes with a lot of experience with Chris as a team-mate and also Tommy as a manager.

"It is definitely going to be competitive and I won't be doing anything differently to how I approached last season. I will come into each event with the same attitude as before - doing the absolute best job I can and as long as I am doing that I will be happy."

"I was happy after making the Showdown last season and didn't feel like looking at other teams, but in the background I have known team owner Alan Greig for a long while because we both have an association with Dickies" added Walker. "I had one eye on it and as the Be Wiser Kawasaki team gathered momentum behind the scenes, combined with the announcement of Tommy joining and potentially being team-mates with Danny made this quite a mouth-watering prospect. Because of it being a new team, where perhaps I can play a similar role to how I did with GBmoto, by helping with the development with my experience of the settings and knowledge of the Kawasaki, made it exciting.

"Everything with this team is brand new but both myself and Danny are taking some of our crew with us that we have worked with before which is great. I am chuffed to bits to be a part of this team and I am pleased that I have been able to return next season after doing a good enough job in 2014 to warrant this opportunity. I believe the team can be as competitive as I was last season with GBmoto without a doubt. I know we have a good level of machinery and with Tommy's involvement and feedback it should be fantastic.

"I also think Danny is one of our most exciting up and coming riders in this country and I am looking forward to seeing him get his teeth into it as I think he will be a force to be reckoned with. It is a bit like all those years ago when Niall Mackenzie and Terry Rymer helped me and took me under their wing; it was amazing at the time. For me to be able to work with Danny - with me old enough to be his dad - means we can push each other week in and week out and have a lot of fun and we all want results."