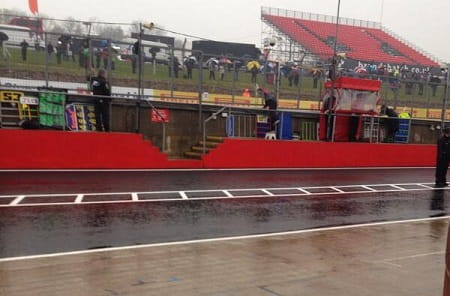 Conditions were tricky on Sunday after torrential rain throughout the day leading to a crash-filled qualifying session in which thirteen riders fell from their machines, some numerous times. Byrne crashed towards the end of the first of three sessions with it immediately clear the Kent rider wanted the session stopped, gesticulating at marshals as soon as he’d found his feet.

Byrne did manage to get his bike back to the garage via the slip road but despite getting back on track in the Q2 session the Rapid Solicitors man could not set a time fast enough to secure a place in the final shoot-out, leaving him thirteenth on the grid.

“I do not understand how so many top qualifiers can crash and the track still be considered safe.” Byrne told press following his charge to victory in race one on Sunday.

Milwaukee Yamaha rider, Josh Brookes took pole position despite three crashes during the qualifying sessions. The Aussie described track conditions as ‘lethal’ but was on the fence when it came to saying whether he thought the session should have been stopped.

“I kind of agree that the track wasn’t completely safe to go out” Brookes told Bike Social. “In the wet morning sessions we were able to go five seconds quicker than in qualifying. The conditions were almost identical but in the afternoon there was the detergent down to deal with spilt oil.

“In some ways I agree to say it wasn’t safe but how else do you go qualifying unless you get out there and do it? In some respects I was hampered the most, I had three crashes but I somehow managed to get pole position so if you’ve got the right mentality and approach you can still do well in treacherous conditions.”

“A wet track with a temperature at ten degrees is the worst cocktail you can have. It’s not a new situation, we’ve experienced it here before and at other venues and there is no simple solution” Higgs explained talking to Bike Social at Brands Hatch.

“I don’t make a conscious decision to deliberately put people into an unsafe situation, it’s about balancing risk. This is a high risk profession and we need to leave it at that. Many riders crashed, other riders didn’t and that was the result. We’ve demonstrated time and time again and not least today that we take great efforts on track preparation, marshal communications, medical rescue and everything else to one of the best levels in the world. I’m proud of our record; I’ll defend that rigorously and yesterday comes into that category. 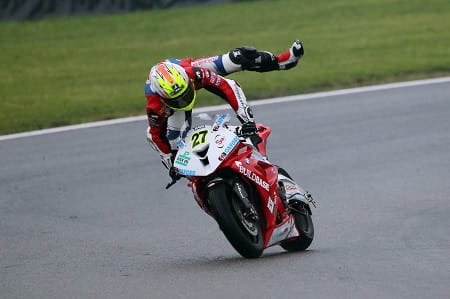 “There was a lot of pressure coming into this round. It’s the first round of the year and when things are going wrong pressure boils over. My job is to keep a calm head at all times and manage the situation. It’s easy to say something is unsafe; it’s a high risk profession. If we’re saying that’s the level at which we don’t race then it’s a very difficult thing for the sport to manage in the UK. Race tracks are living things and they change by the hour, sometimes by the lap. The circuit was prepped better than ever in view of the problems we had in 2012, extraordinary effort went in here this week, nothing ran on Wednesday and on Thursday there was a high pressure fresh-water jet-wash to suck up all the impurities and when the event started on Friday and Saturday we immediately saw people down to lap record pace. To me that suggests a well-prepared circuit.

“When the temperature drops by 5-6 degrees and on top of that it is wet, things do react on the circuit. Race tracks are used heavily, when water hits them it starts doing strange things and the grip levels reduce. It’s a fact but the riders have to ride to the conditions and yes it’s difficult, they are the bravest men (and woman) I know and really are true heroes but I think it’s unfair for it to be thrown back in my direction, what can I do about it? We will look at the circuit again but I think people have to realise that there’s nothing here at Brands Hatch that is different anywhere else. It’s exactly the same tarmac constitution used at the MSV circuits and exactly the same as Silverstone. Race circuits aren’t made with daft decisions; things have to be extremely consistent with data and knowledge acquired over multiple sites in multiple conditions.

“I’m pretty sure I’ve been around other championships where people have crashed on oil that is so obviously there and rider safety has not been paramount, so yes I want to defend our position on this. I have broad shoulders, my reputation is on the line; if I make a fundamental error of judgement I could go to prison. If anyone wants to throw criticism at me they need to look at the broader picture. I spoke to Shakey after the race and it was a completely different ball game, the pressure was off and the frustration was gone. I could look them in the eye. My job is to make them race in the safest conditions possible and yes some things are out of your control but there has to be a sense of balance to this to preserve the championship and the whole sport.”

Following the qualifying session, former British Superbike racer now MotoGP star Cal Crutchlow sent a message to Stuart Higgs on Twitter asking whether traction control would have prevented any of the crashes seen in the session. British Superbikes banned traction control, which alters power delivery in accordance to grip levels, in 2012 in a move to a spec-ECU in order to cut costs.

@stuarthiggs just a question. Not a debate or argument. Do you think a little electronics would help SBK’s in the rain ? Less risk ?

Reigning World Superbike Champion, Tom Sykes, also a former British Superbike racer, weighed into the debate as well to say he thought all superbike classes should have full electronics.

@calcrutchlow @stuarthiggs ...Well said Cal. All SBK & Motogp should be "full" electronics. Anyone who disagrees has no idea. False economy.

In response to this, Stuart Higgs has said that traction control is a double edged sword in the sense that while it can prevent some crashes, it can also cause more violent accidents.

“We started the discussions [to ban traction control] back in 2009. We didn’t just wake up one morning and say ‘wouldn’t it be great not to have traction control?’ It’s proved effective since 2012 and even prior to that with the EVO rules, traction control isn’t the big saviour to anyone. I can remember, while it seems everybody else has forgotten, mothers of all high speed accidents with traction control kicking in at times when you didn’t know it, need it or want it!

“Circuits are designed to have run off round the corners; traction control simply lets you go around the corner faster therefore when it goes wrong you have a bigger, more violent accident. Yes it can make things more safe in certain circumstances but poorly set up traction control leads you into the realms of haves and have nots. In some situations it might stop a crash but in others it can cause them, look at Pedrosa last year at Aragon, you take away one sensor and he was launched into the air. MotoGP has the most advanced motorcycles in the world but if you take a cold morning at somewhere like the Sachsenring or Silverstone, left-hand side of the tyre you can end up in the fence quite easily. It’s all very theoretical.

“We came to our conclusions with sensible discussions involving all teams and everyone is quite satisfied, as far as I am led to believe, that the regulations are fine. You can’t have this where people suggest all of a sudden after one situation that you turn it all back on again as it just gets us back into the state the championship was in before which was very difficult. We are comfortable with the regulations. There will be difficult days and those difficult days are normally the ones with a very cold, wet track. If anything extra-ordinary comes out of it in terms of the surface of the circuit and there is a trend that we can see then we will objectively do something about it, of course we will. It’s been a tough weekend after a long off-season; everybody is back in competition now. We’ve got one set of results in the bag and everybody can move on and stretch their legs at Oulton Park and get into the more stable part of the championship.”

British Superbike Race Direction have long been known to champion the series’ safety record. Monday’s first race was stopped following a blow-up for James Hillier on the Quattro Kawasaki and a thorough clean-up operation then ensued before riders were allowed back on track. Even then, riders were given a six minute window to test the track and decide whether the grid area, where most of the oil had fallen, was safe enough to race on.