British Superbikes Oulton: All you need to know

British Superbike rolls into Oulton Park this weekend for the seventh round of the 2014 season, with three headline races posing the ideal opportunity for riders to capitalise on those all-important podium credits.

THE STORY SO FAR

It had looked as though this season would turn out to be a battle between three-time British Champion, Shane Byrne and twice runner-up, Josh Brookes. However since Knockhill Ryuichi Kiyonari has risen to the challenge of fighting for his fourth title.

Taking two victories and three podiums, Kiyonari has been the man at the last three rounds. Coming out of nowhere at Knockhill, he caught Byrne with his pants down in the first race and would have doubled up had he not nearly catapulted himself into the air in the closing laps. Arriving in Byrne’s back garden, Brands Hatch, Kiyonari pinched yet another victory from the Kawasaki man. Good money would have been on a double had a thunderstorm not led to the main title fighters playing it safe in the second race.

Josh Brookes dominated at Thruxton last weekend but our ride of the weekend went to Kiyonari once again. Starting from the fourth row of the grid in race one, the Japanese rider fought through and broke down the gap to the leaders despite two mistakes, including running on at the club chicane. The Buildbase BMW man might have even clinched second from Byrne had he not come as close as you can to high-siding without falling off your machine on the final lap. 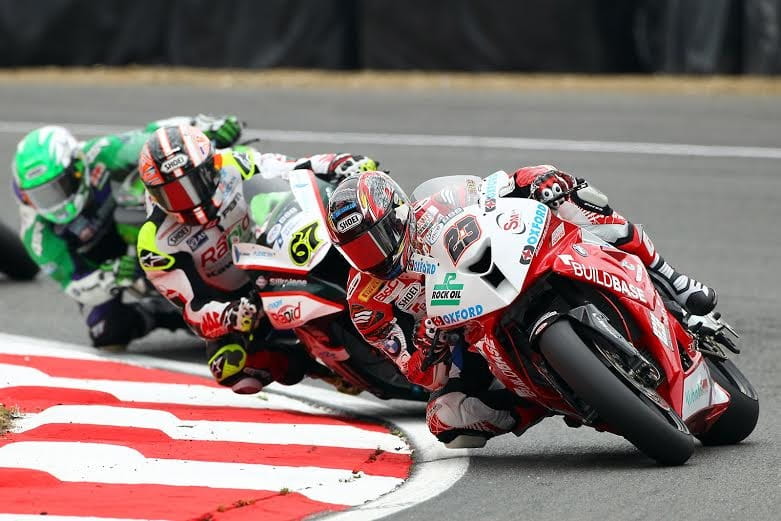 Byrne currently dominates the points standings and holds 21 more podium credits than his rivals, but with Oulton Park a three race meeting it’s a prime opportunity for his rivals to reel him in. Kiyonari is the most successful rider ever around the flowing Cheshire circuit and Brookes beat Shakey in the series’ last visit earlier this year.

Dan Linfoot threw the cat among the pigeons at Thruxton showing his capability to run with the front boys, just missing out on a podium at the end of each race. Will the Wetherby rider be able to keep it up as he moves to Oulton Park? He’ll be hoping so, as he’s currently fighting with Chris Walker for the 6th showdown spot.

Would you believe that the British Superbike Championship has only seen one wet race so far this year? It looks like that may be about to change with heavy showers forecast for Sunday so if you’re planning on heading down it might be worth taking an umbrella. You might get away with it on Saturday though…

As mentioned above, there are three British Superbike races this weekend. Two of them will run as usual on Sunday with an extra race added to the schedule on Saturday. The full weekend schedule can be found here.