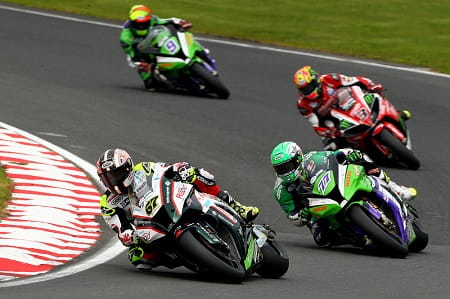 After a six week break, the British Superbike Championship returns this weekend for the third round of the 2014 season. Shane Byrne currently leads the standings, some thirty points ahead of Milwaukee Yamaha’s Josh Brookes.

Last year at the Norfolk Circuit, the first race was won by eventual champion Alex Lowes, who is no longer competing in the series after a step up to World Superbikes and the second was won by Byrne, who is in imperious form so far this season having won three out of the first four races.

Byrne came into the 2014 season on a mission, telling Bike Social that losing out on the championship to Alex Lowes last year was ‘a kick in the nuts’. Leading the title chase by thirty points, Byrne sits in good stead so far although with Josh Brookes breathing down his neck, he can’t afford to rest on his laurels.

“The start of the season has been nearly perfect” said Byrne. “We had a great couple of rounds, but as a team we certainly haven’t been resting on our laurels since Oulton Park. We had the pre-season test at Snetterton which was really good and I know some of our rivals have been out on track there recently, but I we can get straight up to speed. We will be ready to get back out and push for results.” 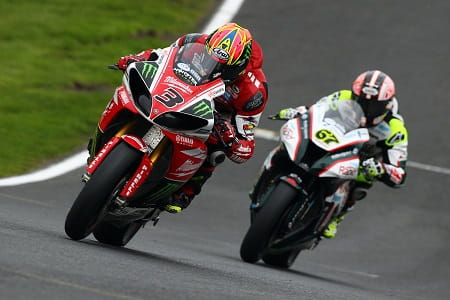 Brookes is the only man to have beaten Byrne so far this season, unlike many of his fellow competitors, Brookes has not had the last six weeks off from racing; instead participating in a packed road racing scheduled at the North West 200 and Isle of Man TT.

“I am feeling confident” Brookes comments. “If we continue the way we have then we should be searching for wins this weekend. Some of the other teams have tested at Snetterton but I don’t think we will be disadvantaged because we haven’t. I feel like I have been away from BSB for the last few weeks, but now I am back to thinking about what we can do this weekend. It was great to win at Oulton Park but we need to focus on the present and where we head to next.”

The teams both Byrne and Brookes speak of include James Ellison’s GBmoto Kawasaki team, who were testing at the Norfolk circuit just last week. Mark Smith-Halvosen’s team has enjoyed a brace of strong results so far this season, with Ellison having been on the podium in every race. Ellison told Bike Social at Oulton Park that he was confident the team could work to find what would be needed to close the gap to the front and we’ll soon find out this weekend if Ellison is challenging at the front.

John Hopkins will be looking to kick-start his 2014 campaign after nothing but poor results so far. The Tyco Suzuki man enjoyed strong results at Snetterton in 2011 and will be hoping he can return to the top this weekend. Three-time champion Ryuichi Kiyonari has more wins to his name at Snetterton than any of his rivals and has had a promising but troubled start to the season aboard the Buildbase BMW; adding another win to his tally may be out of the question this weekend but taking BMW’s debut podium isn’t an unrealistic goal. 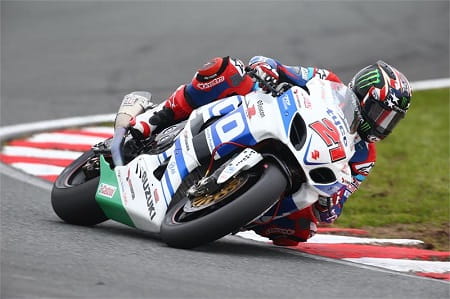 Before Sunday’s first race, the paddock will take a moment to honour two British Championship riders who have recently lost their lives in road-racing incidents. RAF Reserves Honda rider Simon Andrews passed away after an incident at the North West 200 last month while former British Supersport Champion, Karl Harris who tragically lost his life during last week’s Superstock race at the Isle of Man TT. Andrews’ 2014 race bike and Harris’ 1999 European Superstock Championship winning Suzuki will be positioned ahead of the starting grid. There will also be an air-display from the world’s only airworthy B-17 Flying Fortress bomber followed by a low-level flypast by an RAF Tornado GR4. 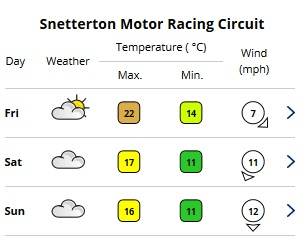 The good news is that there’s no rain forecast for the three-day event, with the Met Office reporting temperatures of up to 17 degrees. Last year, Snetterton was basking in sunshine and there’s a small part of us hoping for the same this time round!

If you aren’t lucky enough to be heading over to Norfolk for a weekend jolly, as usual Eurosport will be showing live coverage of all British Superbike qualifying and racing.