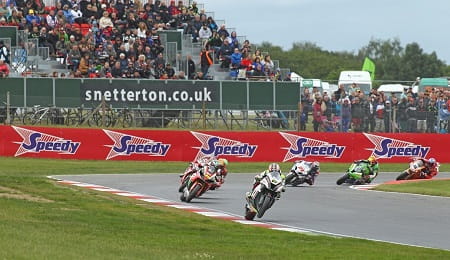 The British Superbike Championship is back in action tomorrow as the series travels north of the border to Knockhill Racing Circuit, just north of Dunfermline.

Shane ‘Shakey’ Byrne leads the championship over James Ellison by forty-five points after taking five victories out of six races so far this season with Josh Brookes, third in the title standings, the only rider to have beaten the Rapid Solicitors Kawasaki man as of yet. After a crash in the second race last time out, Brookes will be looking to get back on his feet at Knockhill, gunning for victory once again.

Byrne took the double at Knockhill in 2013 with Brookes, then on the Suzuki, unable to match the Kawasaki’s pace. Ryuichi Kiyonari completed the podium in both encounters last year and after a tough start to the 2014 season aboard the Buildbase BMW, he’ll be hoping for a repeat performance to rejuvenate his title chances.

Headlines in the build-up to this weekend’s fourth round of the championship have surrounded a flurry of rider changes as teams head into a busy mid-season. The first of these changes came as early as the third round at Snetterton as last year’s best-of-the-rest riders’ cup winner, Jon Kirkham upped tools and left the Tsingtao Kawasaki team after the second free practice session, citing ‘lack of testing and feeling with the bike’ as his reasons for departure.

After a strong debut at the Isle of Man TT, Peter Hickman stood in for Kirkham on the MSS supported ZX10-R although the Louth rider was keen to make clear that it was a one-round replacement and has since announced a deal with the RAF Reserves Honda squad which sees him take the seat left by the late Simon Andrews.

Halsall Racing were also suffering problems at Snetterton after their rider, Harry Hartley, had a huge crash in qualifying to write off his Kawasaki. Running low on parts after a few big crashes for the youngster, the Jack Valentine-run squad decided to cut their losses and left the Norfolk circuit before the races even started.

The following week it was announced Hartley had been ousted from the squad in favour of Kirkham, a rider Valentine took to three podiums and a race victory on the Crescent Suzuki in 2011. Tsingtao Racing opted to take Hartley on for Knockhill in what became a straight-swap between the two Kawasaki teams.