Westmoreland on Donington and the Showdown 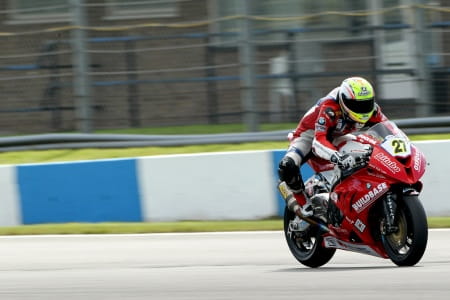 Buildbase BMW British Superbike rider, James Westmoreland saw his best weekend of the year this past weekend at Donington Park, taking a fifth and fourth and securing his place in the Title Fighters’ Showdown from his team mate, Jon Kirkham. We caught up with him for a quick chat ahead of the final three rounds:

How did it feel to beat the likes of Shakey and Lowes to pole position on Saturday?

It wasn’t a one off either, you then did it again in the second race by taking the fastest lap. Do you think your desire to get into the showdown helped?

Yes and no. In all honesty, I knew that I couldn’t afford to make a mistake so there was a bit of pressure from that angle as I knew one mistake would mean game over. On one hand, I had nothing to lose but on the other I had an awful lot to lose at the same time! The pace was there because we had a good set up and I wanted to get into the showdown, but as I said, one mistake would have meant game over.

Do you ride well under pressure?

That’s a tough one to answer, in certain times I do and in other times I don’t. It all came together at Donington and it was a good weekend.

Last year you took the BSB Riders’ Cup finishing 7th place after a real strong end of the season, another strong final few rounds would put you in a great position to achieve a strong championship standing and maybe even have a stab at the title. What are you expecting going into the showdown?

I’m expecting the unexpected; as we’ve seen over the years the Showdown can throw up all sorts of surprises! The plan was always to get in to the showdown and the last three circuits suit me and they suit the BMW too so they are three rounds where I’m expecting to be strong as I was strong at them last year and I’ve come on a lot since then. I can’t wait, we’re in the mix where we need to be and after a weekend like Donington it’ll be an awful lot of fun.

Could you take both yours and BMW’s debut podium in the last three rounds?

Definitely, look at this weekend – we were in the mix to win the race, my race time in Race 2 was faster than last years time and faster than the first race as well so the pace is there it’s just the fact that on that day the boys were just a fraction faster. It’d be disappointing to end the year without having been on the podium. I feel like I’ve made a big breakthrough and we’re pretty much where we need to be. 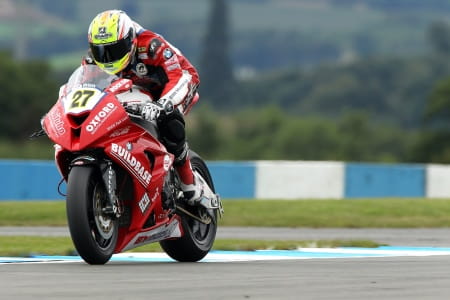 This is your best BSB season to date and it could potentially get a lot better, what do you think this means for your future?

I haven’t had the easiest time in BSB since leaving Supersport. I was very fast in 600s and then when it came to Superbike I didn’t have the package underneath me to show my potential, especially in the first year. Now I feel like I’m starting to show people what I can do and let people know that I’m a force to be reckoned with and an established superbike rider.

There are generally mixed opinions about the ‘Showdown’ rules in BSB, what are your thoughts?

Mixed! I guess it depends on whether you’re in it or out of it, last year my opinion would have been slightly different to this year. Last year we missed out but ended up 7th in the championship and this year we were joint sixth going in so got the place but it doesn’t matter if I got in on count back or by one hundred points, the place is mine and I’m ready to fight.

Who do you think will be the 2013 BSB champion?

Obviously I'd like to say me, but in reality, I still have a lot to learn and we don't have any podium credits so are a few points behind the others. Shakey has looked real strong this season so he could well take the championship but if anyone is going to take it off him it'll be Alex, as we saw last year the final few circuits suit him and he's riding real well at the moment.