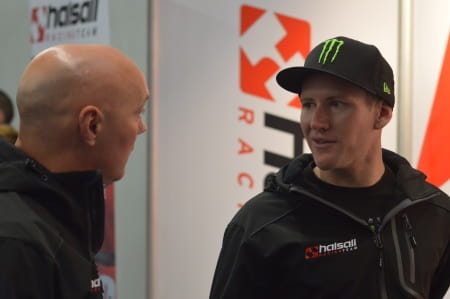 Halsall Racing have announced Josh Waters will line up alongside their BSB regular, Lee Costello for the remaining rounds of the 2013 British Superbike championship.

Waters was dropped from the Milwaukee Yamaha team ahead of the Assen round last weekend in favour of Tommy Bridewell, who had in turn separated from the Halsall outfit.

Following being dropped by the Milwaukee squad, Waters flew out to Le Mans to compete in the Endurance World Championship for BMW Team Thevent. The team were leading the prestigious twenty-four hour race until mechanical issues forced them into retirement.

The double Australian champion told Bike Social last week he was keen to return to the British series and was exploring multiple options.

“I am really grateful for the opportunity that Martin has given me to ride the Kawasaki for the remaining two rounds of the season.  For me personally I want to simply focus on the future, staying in BSB and working with a leading team.  Martin has produced a bike capable of running at the front and winning the championship next season. The rest is down to me and I am determined to make this work.  I was very impressed with the team and their entire approach to racing.  There were so many similarities to the team I rode with for seven years in Australia, where I won two national superbike titles.  Martin and I seem to share the same philosophy and values, so I look forward to working with him and his team.”

The Martin Halsall outfit have already confirmed they're looking to run two bikes in the 2014 season and Halsall hasn't ruled out the possibility of Waters staying on board next year.

“Since our ride became available, there have been a number of approaches which I have assessed carefully.  I had only come to know Josh in recent months and very much liked what he was about.  I believe with a strong team behind him and the performance of the Kawasaki which we have shown to be a leading contender, I wanted to give Josh an option for the remaining rounds, with a view to extending for next season also.  We will evaluate that position fully after Brands and see whether it is something which can be agreed between both parties.  I will sit down with Josh at the appropriate time when it is good for both of us.  For now, the focus for the team and Josh is on the rounds at Silverstone and Brands Hatch” explained the team owner."