Tough weekend for Francis at Donington 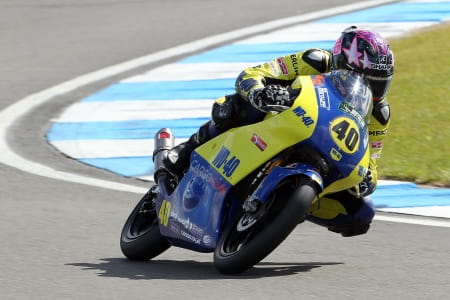 British Motostar championship leader, Joe Francis finished fourth in the Motostar class at Donington (third in Moto3) and leads the championship in to the final three rounds. We caught up with him to see how his weekend went…

How did you get on at Donington?

It was a tough weekend to be honest. It was wet on Friday, we went out to get a feel for the track but we didn’t push too hard. It dried up for Saturday and in the first session we did nine laps and then lost the front end on some oil into Redgate. In the second session, we managed to get onto the front row but we were having problems with the quick shifter. Fortunately we got it working in warm up for the race but on the outlap the bike started misfiring so we started the race knowing the bike wasn’t 100%. Fortunately, we only lost out on four points as we finished fourth overall but third in the Moto3, just one place behind Tarran [MacKenzie].

You’re back at school now and heading into the final year of your GCSEs, how do you find juggling racing with school?

I just catch up when I can. I don’t really miss that many days through racing so I can usually catch up pretty quick.

With just three rounds to go, it is mathematically possible to win the championship at Assen or Silverstone. How do you plan to go into these rounds with the aim of taking the championship?

For Assen, my plan is to go out to win the race and not think too much about the championship. If we win in Assen, we’ll be in the position to perhaps settle for a podium in Silverstone with the championship in mind as we have a chance of winning the title there. It is possible at Assen though, if Tarran doesn’t score and I win.