To be a woman in motorcycle racing... 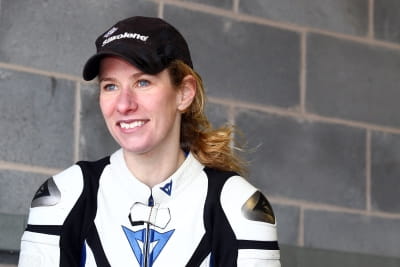 Motorcycle racing is an incredibly male dominated sport. In Grand Prix racing despite the odd appearance by a female racers in Moto2 and Moto3 there has been little, if any success for them. In Britain, there are two female racers in particular who are familiar names within any racing-loving household; Maria Costello and Jenny Tinmouth.

Over the years, these two have battled to be the fastest woman ever around the Isle of Man TT course and in 2012, Tinmouth became the first woman ever to race in the British Superbike championship.

We caught up with Maria and Jenny to discuss being a female in a male dominated sport:

On being a female in the paddock…

Jenny: “I have been racing in different classes in the British Championship now for 9 years, so to the other riders I am not a novelty, I am a just a racer and am treated the same as any other rider.”

Maria: “I’ve been racing for almost 20 years and because I spend so much of my life in race paddocks they have become like a second home and I’ve never felt more welcome especially as I’ve made some special and lasting friendships there.”

Jenny: “Besides the obvious differences the only way I am at a disadvantage is when it is compared to a full time rider, because I have a 9-5 full time job I have to fit in my training after a days work so if I work late it is sometimes difficult to find time.”

Maria: “I’m not sure. Women are winning races against men so maybe not. I think this is a question for a physiologist. My training plan is pretty unique because I’ve broken around 23 bones during my career and a couple of them need maintaining with specific exercises that my fantastic team of personal trainer, physiotherapist and sports therapist put together. I do a mixture of endurance, strength, conditioning and flexibility training and I can clean a decent weight when I’m on form. Fitness for racing is the same whether you’re male or female so I would imagine it’s pretty similar.”

Jenny: “There is no reason why women can't compete against men in motorcycle racing the biggest problem for all racers is cost and when you get to higher levels finding sponsorship is also difficult. I think rather than focus on differences between men and women in racing we need to look to encourage more people to race rather than just one sex.”

Maria: “Back when I was doing some work with Sport England and the Women’s Sport Foundation I was privileged to meet some of this country’s greatest sports women from sports ranging from football to rowing. The one thing I learned from all these women was their envy that I was able to compete on equal terms with the men and it was something they all wished they could do in their own respective sports. So I feel very fortunate that this is the case in motorcycling. I don’t think splitting them at lower levels would be the way to encourage women in to racing. All racers are equal once they line up on the grid. I think the governing bodies of this sport, such as the FIM and ACU need to be doing more to educate women, particularly the younger generations, that racing is something for girls/women so that more can consider it at a younger age. I am being considered for the FIM’s Women in Motorcycling commission which aims to support all women’s two wheeled motorsport and I really hope I can give something back to this sport and help encourage more women to participate.”

What do you think? How could we encourage more women to get involved in motorcycle racing?