Shakey: “I don’t want to be an equal-time champion to anybody” 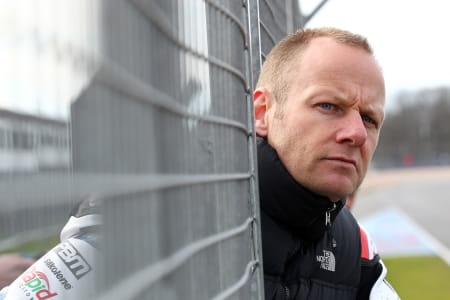 As the first official British Superbike Championship kicks off the start of the season, we grabbed a chat with reigning champion Shane ‘Shakey’ Byrne to ask his thoughts on his Kawasaki race bike, his competitors and his future plans…

Q: You are battling for your fourth BSB Championship title this year, what’s your strategy?
A: We were 2012 British Superbike Champions, but that was last year… I guess ‘reigning champion’ means something, but to us it just means we have to work harder now to ensure the results this year are the better.

Q: How do you stay focussed throughout the year?
A: I set myself little goals, things that I would like to achieve in training and/or lap times to aim for at the different circuits, but ultimately it’s just about what happens on Sunday afternoon.  That’s what you live for and that’s what you’re paid to do. It’s a case of getting out there and being as strong as you can possibly be.

Q: Who would you say was your biggest rival this year?
A: I genuinely don’t think about it. Had you asked me this question four or five years ago, I would have said that I wanted to beat certain riders in every single race. Now I just think I’ve got a great team around me, brilliant guys in the garage and a good bike. I know that if I do my job well and spend all my time concentrating on me, my team and my bike, by Sunday afternoon we’ll be fast enough to win a race. Wasting my energy and time thinking about other riders is not really in the script.

Q: You’ve been out in the first session, how are you finding the bike?
A: It feels absolutely fine, but it was important to go and blow out a few cobwebs today. We’ve got the BSB ACU bike in now, but when we tested the other week we had to use a different one. It was basically just a little short run-around just to make sure that all the channels read what they need to read, and that the bike is doing what it’s meant to do.

Q: What do you love so much about BSB?
[this is met with lots of laughter from the rest of the team!]
A: The thing I like about it is that I’ve probably got the best team in the paddock and I’ve probably got one of the best bikes in the paddock – I know that every weekend we’ll be fighting for a race win. If we could have put ourselves into World Superbike and win races every weekend, it would have been great and if we could put ourselves in a position where we could do that in MotoGP, it would be even better, but reality is that we can’t do that. I love winning races and I love being at the front and this team in this championship gives me the perfect platform to do that.

Q: You’ve had some fantastic experience in the racing game – what would your best piece of advice be for those thinking of joining the sport?
A: They should go and pick up a golf club or something or kick a football! It’s not the easiest of sports, it’s a very cruel sport, but at the same time there’s something about it that we all love and that’s why we all do it.

I love nothing more than riding my motorbike and I’ve never wanted to be anything but to be a motorbike racer since I was about four or five years old. To be in a position where I am now, coming from a small council estate, I’m really happy and I’ve had a great time. Don’t get me wrong, if you’re off your bike for one minute, someone will try and jump on it, but that’s the competitive kind of drive you need to have to be successful in this sport.

Q: Where do you see yourself in five years?
A: Hopefully retired! I don’t know really, I think it’s important to take every year as it comes. As a young rider you’re always looking to get out of the UK and you want to get into a world championship because you can never be a world champion if you keep racing in the UK.

At the same time, when you’ve been there and you’ve chased that dream, and maybe didn’t get the best shot at doing what you needed to do, you think to yourself: you know what, I’m happy here, I can win races and I can have fun. If it’s like that all the time, I would like to keep racing – if we get three or four more years in, or five years or ten even, that’s great. If all of a sudden I think to myself, you know what, I’m not enjoying this anymore, then it’ll be time to do something different.