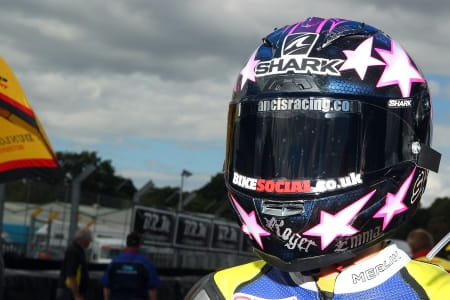 It was another strong weekend for Bennetts-backed Joe Francis in the Motostar Championship at Oulton Park. Qualifying second, Joe went on to take the lead in the race at the first corner and a battle ensued with Tarran MacKenzie. After swapping places and paint throughout the race, the result would be decided on the last corner, where Joe tried to make a move on MacKenzie around the outside. Unfortunately, the fifteen year old was unsuccessful and crossed the line in second place. Joe now leads the Motostar championship by eleven points. We caught up with him after the race…

How was the race this weekend?

At the start of the race I got straight to the front and Tarran [MacKenzie] and I started to battle from the off. I ran wide at Shell Oils hairpin and lost a bit of ground. I was having a few issues with getting the bike into gear properly, it made it real difficult to get the drive out of the corners.  I tried to go around the outside of Mackenzie coming out of lodge to get up alongside him on Deer’s leap but I didn’t expect him to come out as wide as he did! It’s a shame, as without the gear problem I could probably have got a bit better drive and taken the win.

When racing, do you think about the championship much?

I’m focussing on each race at the moment and trying to win each one. Towards the end of the season if we’re still in the same position, we’ll start thinking about the championship then.

Next up is Cadwell, is it a circuit you like?

I love Cadwell, it’s where I got my best result last year [second place]. I’ll train a little bit more in these two weeks as it’s a physically demanding track. Hopefully this year we can go one better and take the win!

The WD40 team seem to be a real good outfit, how important is it to have a strong team behind you?

A good team is really important. Throughout the weekend the team are the ones who set the bike up based on your feedback so come qualifying you can get on the front row. If you aren’t on the front row it makes it really difficult for the race. The team support is also important for building confidence ahead of the race.

If you win the title this year, could we see you move up to the Grand Prix paddock?

I’d love to move up to the GP paddock next year with a good team and try to be one of the best in the world.