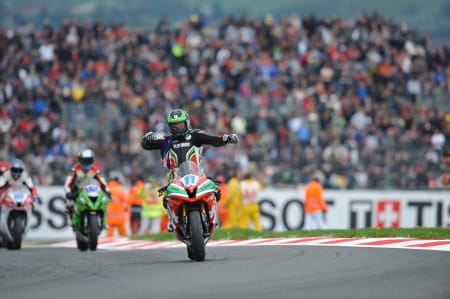 Twenty-three year old, Sam Lowes took the World Supersport Championship two weeks ago in Magny-Cours, leaving him enough time to arrive at the final round in Jerez to take a final win of the season before heading to Moto2 for 2014. We caught up with the champion for a quick chat.

You won the World Supersport title at Magny Cours with a second place finish, you only needed two points but you still went ahead and fought with Kenan and Christian for the win. Why was it important for you to do this?

It’s been a great season for me and of course I knew I couldn't make any mistakes in Magny Cours but I really wanted to win like a champion and go out on top so the racer inside me took over and I wanted to win! It was a great race, I enjoyed it.

Back in Istanbul, you had your first shot at clinching the title but Kenan took the victory after that tough battle on the last lap. Was there a part of you that backed off and thought “OK, he can have his home win, I’ll take the title in Magny Cours”?

Yes a little bit of me thought this but only because the last complex was quite tight and I knew he would have a go if I was in front so it was bit risky and I didn't want to lead at that point! I knew twenty points would get me close to the title but I did try to win without taking too many risks!

There is clearly a lot of respect between you both as shown post-race at both Istanbul and Magny Cours. You had a coming together at Silverstone earlier this year, fault or no fault – you were mature enough to put it to bed and get on with the rest of your season. What can you explain about how your thoughts on the Silverstone incident changed from the moment you fell, to the days and weeks afterwards?

The incident was very strong and close to the limit in my opinion, but I race close with kenan all the time and he is tough guy but normally fair. In the end I still came second which could have happened anyway with few corners to go. He wants it a lot, I want it a lot and taking this into consideration a few days after Silverstone I just forgot it happened, took twenty points and focused on putting it right in Germany. Which we did!

You lost out on the title fight in World Supersport in the last few years with PTR Honda, what would you say have been the biggest differences this year to last?

Mainly the team around me, even from the first test I was very happy with my group of mechanics and their work. For me it was a great feeling from start and this means a lot. I also learned a lot these past two seasons and this year I was able to use all that and put it into practicel. I enjoyed this season more than any other and that really helps.

You’re moving on to Moto2 next year with Speed Up, what can you tell us about how you reached this decision?

Yes I was lucky this year to have some nice interest from Moto2 but from when I first spoke to Luca Boscoscuro I felt very good and positive about it. I believe in the chassis and can see good potential and I know the chassis can win. For me and my career I needed to try get into GP paddock and this is fantastic opportunity for me.

Why did you decide to move to Moto2 and not World Superbikes?

Because now with the rule changes in Superbike the difference from them and GP is only getting bigger and my aim is to try get to GP.

What are your aims for next year in Moto2?

I know it's a very tough class but I'm very motivated and determined to do a good job I know I need to improve but I'm excited for that. I aim to be fighting for podiums, even in my rookie year, especially at circuits I know.

Your brother, Alex has just won the British Superbike Championship this weekend. You two have a close relationship, how do you think this affects your racing?

Alex and I get on awesome and help each other a lot. We are very close and very honest. If he tells me something about my riding, even if I don't want to hear it then I know it's right. It's so nice to have someone so close who understands.

I’m very proud of him this year he has done an amazing job and deserves that championship.

Will he be in the GP paddock with you next year?

It’d be nice to have him there but not too sure on this yet.