Rutter back in BSB on a Blade! 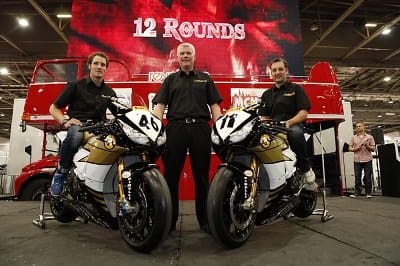 BSB legend Michael Rutter showed there’s life in the old dog yet by signing to ride a Honda Fireblade with the new Bathams Honda team in BSB this year!

The team was announced at the weekend’s MCN London Motorcycle Show at Excel.

‘Blade’ as he is known in the BSB paddock will partner Tommy Bridewell and sees the BSB legend campaign a Honda in World Endurance with the Honda TT Legends Team, and riding a Honda in the Isle of Man TT and other major road races.

Rutter is one of the most experienced riders on the grid, having started the most races with a total of 393, and the ‘Blade’ is keen to repeat his previous success on board Honda machinery, when he finished runner-up in the standings in 2004.

Rutter said: “This is a really good opportunity for me and I am looking forward to getting back on a Honda as that then means I am consistent with BSB, the World Endurance and the roads too. I want to be back in the top six again; we have done it before and I know that the Honda package is as strong as ever. We have the backing of Bathams and some really experienced crew; the bikes are the championship-winning ones from 2010 and I think they did a brilliant job then. The rules have changed massively but that just means that set-up is even more important. I wouldn’t be back on the grid if I didn’t think we could get the results.”

Bridewell had his most impressive season to date in 2012, sealing a position in the top six end-of-season Showdown and scoring BMW their strongest finishes in the history of the Championship. The Devizes rider returns to the team he last raced with in 2010 and is determined to return to the podium consistently this season.

Bridewell said: “I am really looking forward to the season. This team is very much like Supersonic; they have very similar philosophies when it comes to racing. They go racing for fun and for the passion and when I am in that environment that is when I race at my best. I have my crew from last year with me again and there is no doubt in my mind that they can get that Honda working for me.  We want even better results than last year and I want to be consistently on the podium; I want to be up there every round in 2013. I stand a good a chance as any of winning races this season and I want to be the top Honda rider out there. That won’t be easy as there are a lot of really competitive Honda riders in BSB but I want to be battling up there with them and finishing ahead.”