Double amputee bike racer: “I'd say I was bloody stupid!” 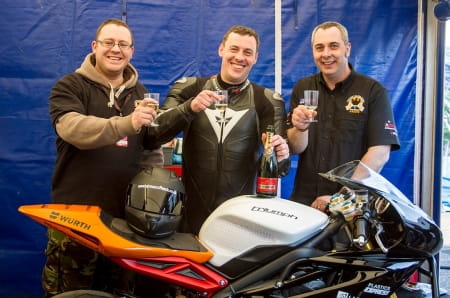 Double amputee Murray Hambro races in the Triumph Triple Challenge, some would class him as a true inspiration and a warrior, but what does he say? That he's bloody stupid, that's what!

Hambro races a specially adapted Triumph Daytona 675Rin the British one-make series, despite having lost his legs in an IED explosion in Afghanistan in 2011. He insists it's given him a new focus and determination.

“I've been riding since I was a little kid but that was only ever off road and then out on the roads when I got a bit older, so this is completely different. I started out at club level and quickly moved on to this!”

The opportunity to get out on track came by complete chance and was after an encounter with Team Manager, Phil Spencer, who approached Murray after a mutual involvement with the Afghan Heroes charity.

“He seemed to feel uncomfortable about me riding on the roads again, and somehow thought it would be safer for me to race on the track! We actually met before the event back in 2010 at the BSB at Thruxton, and so I think he could see I had a love for racing and motorbikes in general.”

It was nothing that Murray could ever dream about and something he hadn't previously contemplated.

“I’d never really thought about it – even when I had my feet! There are lots of different organisations that all encourage you to push the boundaries, and due to my experience with bikes I guess that this one is where I’ve found my niche. That’s why I’m so headstrong and just go out there to do what I can.”

And he certainly does do what he can. Setting their own challenges and aiming to beat their own lap times is the name of the game for Phil and Murray and at Brands Hatch, that's exactly what they did.

“This year in BSB is a training year really. It's mainly for me to learn the circuits and get the experience I need so that next year, we’re in a much better position to start really competing. We keep forgetting that I only started racing last year, so it’s more about me learning the ropes this season. The other riders have been great at offering their help; when they’re not racing they come down track side and watch me race then try and give me advice on how to improve. It’s been a great help and I’m looking forward to the rest of the year.”

Despite being a double below the knee amputee, Murray takes a very philosophical view on his position.

“I had already come to terms with my injuries but it has helped by giving me another focus. You spend four to six weeks at Headley Court for your rehab, and then up to eight weeks at home on sick leave – to say you get bored is an understatement! As I couldn’t work I needed something else to fill my time with and this opportunity provided the perfect focus and distraction for me. Getting to spend time working on the bike and getting ready for days at the track is just brilliant.”

It wasn't as simple as jumping on the bike though, there were a number of challenges and things to ensure they got right before Murray could get out and get laps under his belt. It would seem that as well as the problems he faced himself, there were a lot of things in common with other riders too.

“Getting the riding position right was the main thing, as it’s so important for handling the corners and feeling comfortable on the bike. We adapted the bike and my prosthetics and then adapted the bike further to fit my prosthetics. Another thing was my fitness level! I suddenly realised I could stand to shed a few pounds. A lot of the riders are all younger lads so that made me feel old in comparison!

“The strangest thing was getting used to having everything up on the handlebars, and that took a bit of getting used to. After a day or so on the track though I soon adjusted and I’m used to it now. We’ve tried to keep the bike as close to the standard version as possible, so that no one can say I’ve had a helping hand or anything, so the rest is all pretty much the same.”

Murray has definitely made an impression within the paddock with many people taking the opportunity to speak with him about racing and his achievements so far.

“Within the paddock people are always coming up to me. The younger riders especially aren’t afraid to come up to shake my hand and introduce themselves. It’s really humbling actually; the fact that they take the time to come and hunt you down. A lot of them knew about me anyway from my previous time at club level, so when I came to BSB everyone seemed to already know who I was.”

When asked if he thought he was inspirational, he didn't think so...

“I’d say I was bloody stupid! I wouldn’t say that I was inspirational at all, but if I do inspire people to go out there and challenge things then that’s brilliant! That’s what we hope to achieve here, and that’s the whole point of the team; to help inspire people to do something they never thought they could and to have non-able bodied people working alongside able bodied people.

“When my surgeon asked what my hobbies were and I told him bikes were my passion, he told me to think about getting a new hobby – I went straight out to the nearest Triumph dealership and bought myself a new bike!”

This no-nonsense and determined attitude is one of the traits that a racer needs to succeed. We’re in no doubt the team will achieve their aims of inspiring people to get out and do something they didn’t think was possible. We wish him and the True Heroes Racing team the best of luck for the rest of the season and we’ll keep checking in on them to see how things are going.