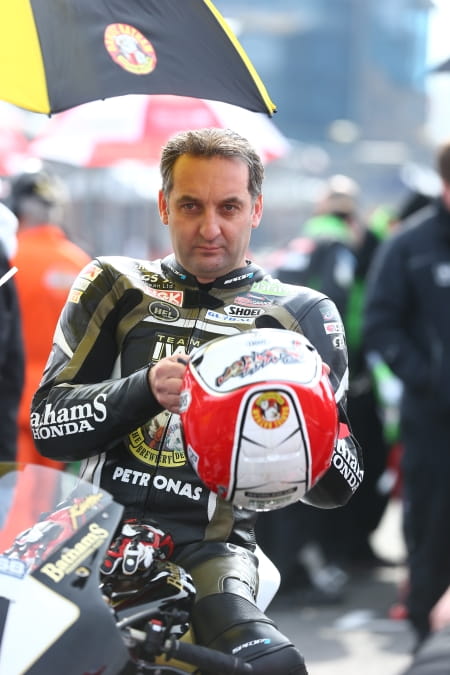 We’ve coined a new nickname for Michael Rutter here at Bike Social. From now on, he’ll be known as, Michael ‘Concrete’ Rutter – because he’s rock solid!

Admittedly, motorcycle racers are all have nerves of steel. They race with broken legs, ribs and arms, and last year Chris Walker was carried onto his bike and rode with two broken ankles… We caught up with ‘Concrete’ Rutter before he jetted off to the TT press conference over on the Isle of Man to see how he was shaping up after racing at the opening round of the British Superbike Championship at Brands Hatch with a broken leg.

“You know what you can do, I knew it would be difficult to race but it gave me a couple of laps to get used to it,” said Michael. “I think it gets you better quicker as you are using muscles on the bike that you wouldn’t use normally. With it being the first round I wanted to get out for myself, plus a lot of sponsors had made the journey to the circuit.”

Michael completed 21 laps in race one and five in race two, but surprisingly it wasn’t the leg that was troubling Rutter the most…

“I broke a few ribs round my back as well in the test and they were hurting quite a lot,” he continues. “At Brands Hatch you have to change direction constantly so it was putting pressure on them. The leg wasn’t too bad, the difficulty was changing gear. Sometimes I was in third and sometimes fourth and I didn’t release. It was knowing which gear I was in rather than the pain that was the hard bit!”

With a jam-packed schedule, its not looking like there will be any respite for the Bathmans Honda rider. “The doctor said my leg needs another three weeks with no weight bearing on it, not that’s not going to happen!” he said. “I haven’t really got time for treatment to be honest – I am going to the IOM for the TT press conference and then when I arrive back in the UK, I’m travelling straight to Thruxton for the next round of the BSB and then after that the Bol d’Or 24-hour race.”

So it looks like there is no stopping Rutter who is planning to race at Thruxton on 14 April. “It’s just part of the job – it happens!” he said. “There are plenty of riders without a ride and if I leave it too long, it could be me who ends up losing my ride.

“I am lucky that I have been with my team for a few years and they didn’t pressure me to ride. A few years ago when a rider was injured, your bike would be parked in the garage and you were given a few weeks off to recover, but that doesn’t happen anymore.”

With a racing career that spans the lifetime of some of his competitors, we have no doubt that Rutter will use his strength of mind and focus on being fully recovered as soon as he can. We wish him a speedy recovery!