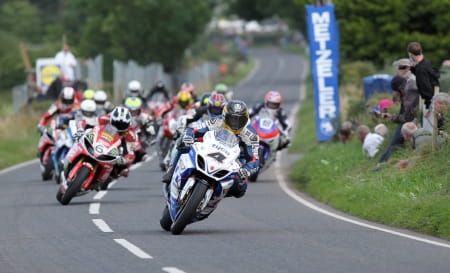 There were doubts cast over this weekend’s Ulster Grand Prix races after torrential rain saw Thursday’s Dundrod 150 cancelled. Fortunately, the weather held off and while the circuit was wet for the start of the first Supersport race, it soon dried up.

It was Tyco Suzuki’s Guy Martin who took the lead in the first 600cc fight, in which he led for a large part of the race and took the win despite immense pressure from veteran New Zealander, Bruce Anstey albeit by just 0.075 seconds! Lee Johnston rounded off the podium on his East Coast Racing Honda.

To the delight of the spectators, the sun came out ahead of the Superstock race which would see Lincolnshire rider, Gary Johnson on his ZX10R take the lead in the opening lap however the Lincs Lifting Kawasaki was unable to hold off TT legend Michael Dunlop who charged to victory. Bruce Anstey took his second podium of the day, while Supersport race winner, Guy Martin retired on the first lap.

The track was completely dry for the first Superbike race, in which fans’ favourite, Guy Martin took his second victory of the day despite a hard charge from Ballymoney’s Michael Dunlop. William Dunlop completed, showing he’s not just a small-bike man. 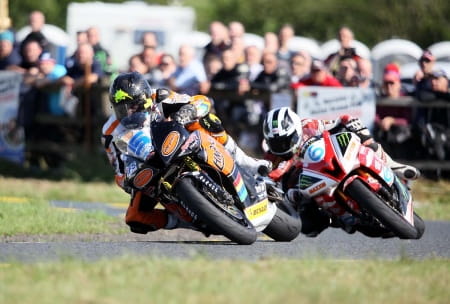 The elder Dunlop brother carried his success through to the second Supersport race, where he took victory on his Milwaukee Yamaha R6 from Bruce Anstey. The second Milwaukee R6 of Connor Cummins completed the podium. First race winner, Guy Martin was forced to retire on the first lap.

Guy Martin returned to the top to take the double as he won in the second superbike race from Bruce Anstey, proving that age is no barrier as he took his fourth podium of the event. Connor Cummins took the Milwaukee R1 to the third step of the podium, concluding a successful day for Shaun Muir’s outfit.