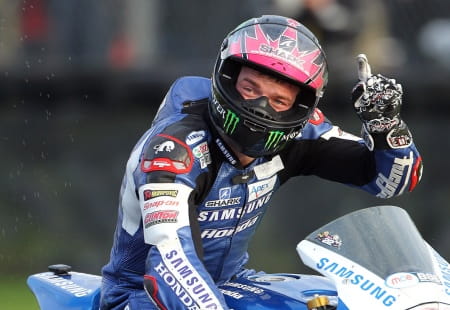 The weather did not dampen spirits at Brands Hatch this weekend for the final round of the British Superbike Championship. Each of the three showpiece races were packed with action with the title being decided on the very final lap of the very final race.

Wet qualifying shook things up a bit on Saturday, with an impressive performance from the Halsall Racing riders Josh Waters and Lee Costello qualifying on the second row. A wet race saw Brookes take off for the lead while championship contenders, Lowes and Byrne were left to scrap for the final podium places with Josh Waters. In the second half of the race, Lowes made a break for it managing to gap Byrne by around five seconds, reeling in Brookes each lap. In the end, it wouldn’t be enough as Brookes crossed the line just under a second ahead of the Lincolnshireman with Byrne third. This meant Lowes took control of the championship for the first time this year, with a three point lead going into the final two races.

Sunday morning came and the heavens had truly opened, with doubts being cast over the safety of the races being run. However, for the first BSB race the sun made a brief appearance, leaving riders with a difficult decision. Some made the decision to go on full wets, some intermediates and a couple on full slicks. It didn’t take long for drama to strike, with championship leader Alex Lowes falling on the very first lap. Halsall Racing’s Lee Costello shot off at the front with James Ellison, taking advantage of their decision to run on the wet weather tyres. With Lowes out, Byrne could have capitalised massively but he – like Lowes – was using the intermediate tyre and it proved a little too much on lap six when he too slipped off. The victory was taken by a last minute charge from Josh Brookes, who came from a whopping sixteen seconds back to take the win on the last lap after managing intermediate tyres spectacularly.

With both crashing, the points remained the same into the final race with Lowes leading Byrne by three points. However, with the rule book stating should a rider fall after completing no race laps, their grid position for the next race is 8 places further back than their original position. This was great for Lowes, good damage limitation. However for Byrne, who had obviously set a time with completing six laps of the race this wasn’t so good. The conditions improved after Byrne fell meaning his time left him twenty-second on the grid and with a momentous task for the final race.

Between races the heavens opened once again and as race three kicked off a determined Byrne charged through the field. Once again, Josh Brookes took the lead and went on to take victory, although it was what occurring behind him that everyone was watching. Lowes and Byrne had made it into second and third, with Byrne passing Lowes and trying to make a break for it. It looked as if he was going to do it, however Alex started to attack towards the end of the race. Everyone was geared up for a 2011, Hill vs Hopkins style last lap, however a mistake from Byrne at Druids would mean Lowes could gain enough of an advantage to cross the line without much of a last lap challenge.

Lowes’ second place put him seven points ahead of Byrne in the final standings, meaning he became the youngest ever British Superbike Champion.