Josh Waters: "I want to make this work" 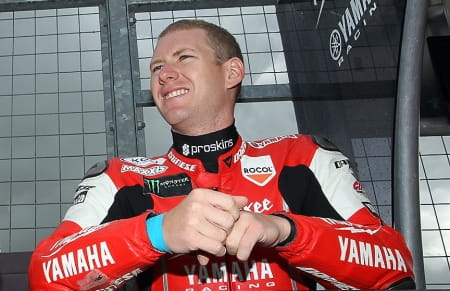 Double Australian Superbike Champion, Josh Waters moved to the British Superbike series this season with Shaun Muir’s Milwaukee Yamaha team. Unfortunately, it hasn’t gone quite to plan for the likeable Aussie, who currently sits fourteenth in the championship with a best result of seventh place. Waters is a talented rider, having shown promise at the Suzuka 8 hour and with some appearances in World Superbikes. His results certainly aren’t due to lack of talent, we caught up with him for a chat…

It’s been a difficult season for you so far, talk us through it…

I’m not gonna lie, it hasn’t been easy. This championship is extremely tough; it’s the top domestic championship in the world. Every domestic championship is tough, when you get the top guys who have grown up riding around the tracks for most of their lives but over here the field is a lot stronger. The R1 obviously works, look at previous years, but at the minute I’ve been struggling so I need to change to try and make it work. The team have been great.

What would you say you are struggling with most?

Getting used to the bike. I’ve ridden Suzukis for the last 7 years; the only 1000 I’ve ridden is the GSXR1000 before coming over here to the R1. I still think I can ride any bike but it’s obviously very different and that’s where we’ve been struggling.

How different is it?

It’s a different machine altogether. A lot of it is in the front and turning. It’s very different to the Suzuki in that way, with that I knew what to do as I’d been riding Suzukis for a long time. This is a good bike though, look at my team mate, he’s doing well this year!

You aren’t the first person to come to BSB from outside the UK and struggle, look at Haga last year and Smrz isn’t doing particularly well either – Why do you think this is the case?

A bit of it is the circuits but for me, as I said, riding this kind of bike is a lot different. Our bikes here are very different, I’ve ridden Superbikes before but in Australia our Superbikes are more like the stock bikes here. The tyres are also very different. I’m not making excuses, this is something I have dreamed of doing, but when you’ve lived in your home town all your life and then you move out for the first time and don’t go back at all, it makes it a little harder. I want to make this work, I will try my hardest and trust me I’ve had days where I feel down in the dumps. For the last four years I’ve been disappointed when I didn’t finish on the podium, in the first year I won the Australian title I finished on the podium in every race. Last year I won a lot of races and took the championship again, you kind of get used to it and now it’s very different.

Does it have much of an impact on your confidence?

Yeah, you’d be lying if you said it didn’t. But I think if all these guys came to a circuit in Australia (that’s not Phillip Island) they’d probably find it tough too.

BSB is a tough series to be in, where would you realistically like to be finishing?

I want to be in the top ten; although I thought when I came over here I could be a bit higher up than that. Last year I felt like I had stepped up my riding, I had a real bad crash in 2010 and was badly injured so took a lot of time off. In 2011 I also had a lot of time off and it wasn’t until the end of the season where it felt like I was riding good again, then in 2012 I went a lot better. The Suzuka 8 hours was good last year, I think that’s what got me this ride. I qualified on provisional pole there and led the race with guys like Kiyo chasing me. I thought I could go a bit better here!

After Cadwell, the series visits some fast, flowing, international circuits. Do you think you might be able to find what’s missing at these?

I look forward to riding at those kind of circuits, I just want to go better so I’ll keep trying. I’ve ridden Donington before, but it was the first time I ever rode the R1 and it was snowing!

How are you finding learning the circuits?

I get up to pace, or to a certain time quite alright and the team have been happy but then I get to a point and that’s one of the things, the way the bike doesn’t like to be ridden where you’re uncertain and you’re a bit unsure on the circuit.

How are you getting on with James Ellison?

James is a really good guy and helps out heaps. Our styles are definitely different but he always helps out.

If your results pick up towards the end of the season, would you like another year in BSB?

I want to stay in BSB next year; I want to do well here. I really want to prove to everyone I’m better than how I’ve been going. I’d love to prove it to these guys before the end of the year!

In the past 5 years or so, we’ve seen all of Australia’s top motorcycle racers retire from the sport and there are few upcoming riders with the exception of guys like you and Josh Brookes in BSB. Is it hard for Australians to get noticed in the sport?

The British series has an awesome following and the following we’ve got over here is what the cars (V8 supercars) have got in Australia. In Australia it’s hard to get sponsors in superbikes for the teams, the crowds are really small, nobody knows that it’s on. Like I said, there are not as many guys at the front as well, maybe just two guys that can win the race where here there are five guys that can win the race. Hopefully we can get some more Aussies up top, but it’s different to the old days.