James Ellison: "My BSB Yamaha is faster than a CRT bike!" 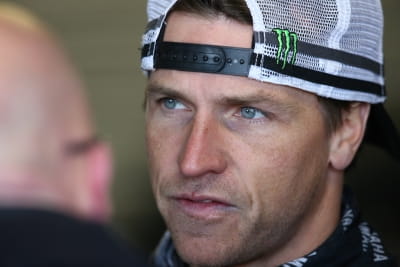 The Lancaster-born racer took time out of his busy schedule to tell us his plans for the 2013 BSB season, why he is glad to be back in the BSB paddock and how he is aiming to be top of the podium for himself and more importantly his team…

How do you stay focussed throughout the year?
It’s just natural really. I don’t find it that much of a challenge because you just have to take it race by race. You focus on each race as it comes and take it one at a time, and then only when it gets towards the end of the season do you start to take the championship as a whole into consideration. That way it doesn’t get on top of you, it just seems normal.

Who would you say was your biggest rival?
Well, it has to be Shakey, doesn’t it? He’s proven he can do it so many times, so he has to be the one to beat. Other than that, it’s just yourself really. It’s only you that can let yourself down, so I guess the only other rival would be me.

What are your expectations for this year? Have you set yourself any aims?
To win it! That’s why Shaun [Milwaukee Yamaha team boss Muir] has employed me, and that’s why myself and the team have got together – to win. It’s down to me to make our aims and expectations a reality and to be honest if you don’t look at it like that, it’s all a bit pointless really. You have to have high expectations and go out there to do your best, and hopefully win. You have to have something to focus on otherwise you might as well go home.

How are you finding the bike so far?
It’s pretty good so far actually, although it’s not had much mileage. It was cold at Donington, damp at Brands Hatch and we missed the first day at Snetterton. That’s my only issue really, not getting out on it as much as I would have liked. This test [Snetterton] has been the only one we’ve actually managed to get out and put a few laps on the bike. We managed to get some new tyres on to it and finished up in 3rd place, which was great.

We’re guessing that getting onto a BSB bike is a lot different to riding the CRT bike that you were on last year – can you explain the differences?
The BSB bike is a lot faster than the CRT and it has less traction control, which is good for me. We really struggled last year, as did all the CRT boys, with the electronics. Last year, with it all being new technology, we had no data to go on, and it [the electronics] take away so much of the feeling. You’re trying to explain to the guys how you want it to feel, but it’s so hard to explain – it’s like learning another language!

We had no testing and no other experiences to go on, so each round was like an experiment. With the BSB bike you’ve got two or three years experience to go on and a base setting you can always go back to if things don’t work out. It makes it more exciting and it’s a lot harder to lose your way, which means it’s all down to you really. It’s much better for the fans this way and I’m pretty comfortable with the bike itself.

How does riding in BSB compare to riding in other championships like MotoGP?
The main difference is the cold! I’m really not enjoying that part actually, it’s been a bit of a shock to the system after spending most of my time training in Texas in t-shirts and shorts so it’s quite different. I’ve been getting up early to train and try to adapt. Other than that it’s pretty similar.

The MotoGP circuit is pretty small, same as here – it’s like we’re all one big family really as everyone knows everyone else. It’s great to be back amongst British fans though, that’s the main difference. You get great fans and more support than you would anywhere else. As the travelling distance isn’t that far you get more people willing to make the trip, so you always get a good turn out.

Are you looking forward to the first round at Brands Hatch?
Yes, definitely! I would have liked to get more track time in, but I think everyone’s in the same boat really. I know Josh [Waters] would have loved more time too, especially for the sake of the team, you want to get as much practice in as possible. We just have to make the most of it and try to get as good a start to the season as possible. I’m definitely looking forward to getting out there though and starting the season.

What do you love so much about BSB? What made you return after riding the CRT bike last year for Paul Bird?
The opportunity with the team was what really made me come back. We know we can do it, we’ve proven it in the past. I kind of fell out with BSB in 2009 when I came runner up. I couldn’t get a ride anywhere without bringing ‘x’ amount of money to the table, even with those great results, so that was really disappointing. You get the feeling that all riders are in a similar position and that the sport is being run more like a business than a passion or a lifestyle, and that needs to stop!

As riders, we do it because we love it, we have a passion for it and we’re good! We give up our entire lives for the sport. It used to be a real career, now it’s just the teams that benefit. Corporate hospitality and tickets sales bring in the money, and that seems more important than actual talent and passion for the sport. I’m one of the lucky ones, and I’m really grateful for that. I’ve got a great team boss and I get on well with the team around me.

I’m one of only six that actually earn a wage from BSB, so I have to be thankful for that, and especially for Shaun. He threw me a lifeline at the last possible minute, and I had to take such a fantastic opportunity. He’d suddenly received extra sponsorship money, so was able to offer me a ride at short notice – I couldn’t say no. Even with all my history with BSB, it’s great to be back and in front of a home crowd, the fans make a huge difference. I feel like we’re in an excellent position to succeed this time around, and I’m really looking forward to the season.

Have you got an ultimate racing idol? Have you ever met them?
Yeah, Kevin Schwantz! My dad always used to watch road racing, and I was never that into it, I thought it was pretty boring actually! I was much more interested in MX to be honest. Then I saw Kevin and he was just awesome, he really changed my mind and I’m a big fan of his. I actually got to meet him through some mutual friends in Texas, and we still keep in touch now which is brilliant. Some MX guys I trained with in Texas worked with Kevin and we were introduced and ended up going mountain biking together – that was a hell of an experience! He emailed me actually, when I won in Valencia, which was a great moment for me. He was congratulating me for beating Rossi, what a highlight!"

After seeing his times in testing, here at Bike Social we’re pretty sure that James will have some more highlights this year…