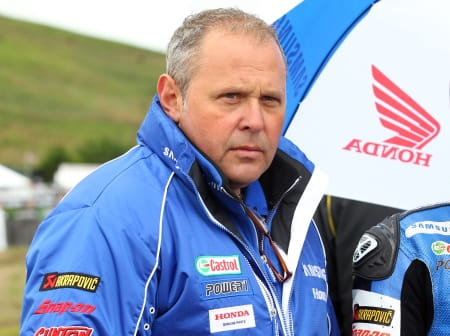 It’s been a rollercoaster year for the Samsung Honda BSB team. On one side of the garage, Alex Lowes is well within the title fight; his showdown place is secured and he's looking good after a double win at Cadwell Park last weekend. On the other side, things should be just as rosy given that there’s a three-time British champion on the bike. However, Ryuichi Kiyonari simply hasn’t been able to find his feet this year in BSB, sometimes struggling to get into the top ten. Midseason improvements saw the Japanese rider begin to fight for podiums, but after a mediocre weekend at Cadwell Park he’ll have to work hard at Donington to defend his place in the title fighters’ showdown. We caught up with team boss, Havier Beltran for a chat about the season:

Alex is having a very good season so far, he’s secured his place in the showdown too. How as a team manager do you progress with him to try and take the title?

We knew that Alex had the potential to run at the front and win races. Winning races and taking podiums has got him into the showdown, we’re at the stage where he can’t be knocked out of it anymore and it is crucial for him now that we have a package that we can win races with. If we go into the showdown without being able to win any races you’re not going to win a championship. Shakey has a very good credit point lead and to beat him you’ve got to beat him on track. Alex and Kiyo have both had a couple of results that have been due to Shakey’s issues but now we need to focus on getting podium credits moving into the showdown. If we go into the showdown with too large a deficit, mathematically it’s extremely difficult. The nature of it is if they haven’t had the podium credits in the previous nine rounds, why would they start winning in the last three? Mathematically and mentally we’ve got to keep winning races. Alex is confident with Donington, Silverstone and Assen so we should be in a good position.

What about Kiyonari, what are his chances?

He’s in the showdown at the moment and we’ve got to make sure he stays there. I’m hoping we can go away from here and be in the showdown.  Kiyo knows full well that he has to be strong from now until the end of the season if he has any hope of winning the title for Samsung Honda.

It’s been quite a difficult year for Kiyonari. What are your views on this?

It’s a difficult one because there are a lot of personal issues and things that have gone on that I’ve discussed with Kiyo and it’s not something that I’ll discuss openly with anybody. When a rider is not happy with a machine’s set up and direction it is difficult for them to be confident and strong out there with the calibre of riders in BSB today. He can run around all day long in fifteenth but that’s not where we want him to be and that’s not where he wants to be either. We’ve managed to identify quite a few areas where we needed to improve as a team and a few areas where Kiyo needed to change himself and we’ve managed to discuss it and resolve it. We then saw a totally different Kiyo again and I’m pleased and confident that we’re back to where we should have been in the first few races of the season.

Kiyo told us the other week that he’s still not completely happy as he’s not quite fighting for race wins. What’s your view?

I think with any rider, when their confidence is high and they are happy both on and off the bike the results will come. Kiyo knows he’s got to be strong here and in his own words admits that he needs to be winning races. If he can do that this week, it’ll increase his chances of being in the showdown.

It must be hard as a team manager to manage opposite sides of the garage with very different results?

Both riders are very different and I’m not going to try and make any one of them the same. You’ve just got to work with them in their own different ways and I think for me to have the ability to be like that with Alex and Kiyo has helped. I’ve known Kiyo for a long time and I know how he is, I’ve also known Alex for a long time although I’ve got to know him a lot better this year. Alex is a very motivated, talented, young rider and he has the ability to listen and learn and I think that’s a positive side to him. Obviously he has a few areas we’d like him to improve and we are doing that as a key thing with Alex is he listens and he learns.

Despite some of the results this season, Kiyonari is still a three-time British Champion. Are you interested in keeping him on board for 2014?

Next year is a different story. At this time of year we are always approached by a lot of different riders and I think that’s a positive thing where the team is concerned. Our focus at the moment is getting Kiyo into the showdown and having both riders in with a shout at the title for Samsung Honda in 2013. When we move into the showdown period then we’ll start thinking about next year and who we’ll have on the bikes.

There’s a been a lot of speculation about Alex moving up to the world stage for 2014. Can you comment on this?
There’s a lot of speculation about Alex at the moment, yes but there is with everybody else too. It’s not unfamiliar territory for us. Every man and his dog want to get hold of Alex and that’s what you expect as he’s a young rider at the sharp end. We knew it would happen and as long as we can focus on the championship at hand that’s the key thing for us. I’d like to keep Alex in 2014 to have another stab at the title or if he wins this year, retain it but we’ll have to wait and see.

There are also rumours about World Superbike riders moving back to BSB for 2014, would you be interested in any of these?

When we choose riders we look at all different kinds of riders from all different kinds of championships. We’re very fortunate to have won a lot of races and a lot of titles, the team has a lot of credible history over the years and it’s a privilege that we have so many riders that want to come and ride for us. These days, if in World Superbike, World Supersport or Moto2 there’s a rider that finds themselves without a ride their first port of call is to get into BSB where they can race at a higher level. Why wouldn’t they? They can be a big fish in a small pond rather than a small fish in a massive pond at world level. It’s unfortunate that quite a few riders in the last couple of months have found themselves in difficulties with the teams that they are in out there and this is something that we’ve grown to understand with some of the teams at World Championship level.

Samsung are a sponsor that we’re obviously looking to keep. It’s not a done deal by any means but there are discussions that will hopefully come together towards the end of the year. Like with any title sponsor it’s not something sorted quickly and over the years we’ve not been a team that has swapped sponsors every other year.

Find out more about Superbike Insurance here. Or, to comment on this article or !