Guy Martin Exclusive: "Yeah, it's alright, but it's not world peace is it?" 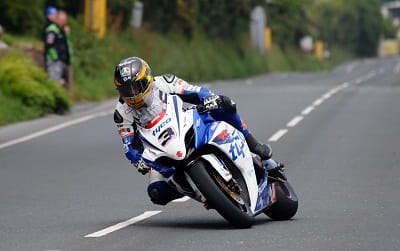 He won the Ian Watson Spring Cup at Scarborough on Sunday, romping home easily in both Junior 600 races and the first leg of the superbike race. He was also comfortably leading the second leg when it was red flagged. Despite his dominance the Lincoln-based truck fitter was characteristically keeping his feet on the ground. “Yeah it’s alright, but it’s not world peace is it?”

“I shouldn’t really like the Oliver’s Mount circuit because it’s nadgery with three hairpins and I prefer the fast flowing stuff, but for some reason we get on a treat. It came dead easy. It’s a nice little one day meet – I was at work Saturday, drove up Sunday morning with some teabags and milk for the boys, won every race we entered, then drove home to my mum’s for tea. There wasn’t a lot of meither and it’s times like that that remind me why I race motorbikes."

While his TT rivals are well underway with racing programmes in BSB and the World Endurance Championship, Guy’s only other excursion on a bike this year was at a private test at Kirkistown last week. His appetite for riding is clearly as large as ever - despite torrential rain he clocked up a mammoth 150 laps testing new parts.

“I’ve got a new blipper on the superbike. As you enter the corners you just pull on the brake and press the gear lever down, then it auto-blips to keep the wheels in line. You could ride it round having a fag. And we’ve got some new factory Ohlins forks – I mean they all come out of a factory so I don’t know what that means – they flex a bit different to the customer forks so I’ve got a bit more give when I’m leant over.”

It’s a series of refinements that has made Guy even more confident on his bike. “The Suzuki isn’t the fastest but it gets into corners better than anything else and it gives me a better feeling than anything else. It’s also useable, and that’s what you need at the TT. The part that’s held us back in the past is the grip.” His Tyco Suzuki team used Scarborough as a chance to experiment with a new 17” World Superbike tyre. “Alright we won every race, got pole positions and fastest laps, but it’s not a true judgement. What works at Scarborough doesn’t work at the TT. If it goes well at the Southern 100 it’ll work at the TT, that’s when we’ll know.”

For now Guy maintains he isn’t really focusing on the TT fortnight that starts May 25th – even though the rest of the world seemingly is. His absence from the recent TT press launch prompted rumours about a possible fall out with the organisers, although Guy insists he simply wasn’t invited as part of an arrangement with the race bosses who suggested limiting his PR commitments.

When pressed on the matter Guy’s response was typically uncomplicated. “I just want to ride my bike.”