Byrne does the Thruxton double 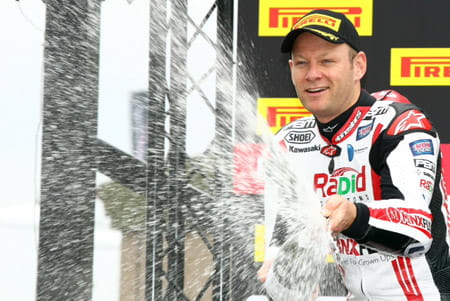 Reigning British Superbike Champion Shane 'Shakey' Byrne has continued his title defence with a superb double victory at the second round of the 2013 series at Thruxton this weekend.

From his front row qualifying position, the Kawasaki rider clinched the holeshot in race one, before battling with Honda’s Alex Lowes and Suzuki’s Josh Brookes for the lead. The safety car was deployed on lap six after Keith Farmer crashed out of contention, but when the race resumed, Byrne was hungry for victory and crossed the line 0.301s ahead of second placed Brookes and third placed Lowes.

It was a similar story in race two, with Byrne again grabbing the holeshot and leading team-mate Keith Farmer and Lowes on the opening lap. However, in what turned out to be an incident-packed day at the Hampshire circuit, the safety car was deployed for a second time at the end of lap one, this time when triple BSB champion Ryuichi Kiyonari crashed out of contention. The Japanese rider will no doubt be disappointed with his performance in this year’s BSB so far, having hoped to return to the series and clinch his fourth British title.

When the action resumed, Byrne again took charge of the field, with Lowes running in second and James Ellison up to third by lap seven. However, the racing was disrupted again on the ninth lap when the safety car was deployed for a third and final time after an accident involving Kawasaki's Lee Costello.

The race was red-flagged on lap 13 when Karl Harris and Tommy Bridewell crashed out at Club, and the result was declared. Once again, Byrne had taken the well-deserved top spot, this time joined on the podium by Lowes in second and Ellison third, while Brookes was forced to settle for fourth.