BSB gets the kick we’ve all been waiting for… 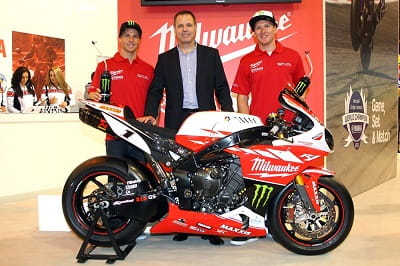 After what seems like months of waiting, teams leaving, Tommy Hill hanging up his leathers for a year and sponsors dropping out, the 2013 British Superbike Championship appears to have finally got the kick it needs to keep us all interested in 2013.

BSB organisers announced at the weekend that MotoGP’s James Ellison will be returning to ride for team boss Shaun Muir in a new Milwaukee-sponsored Yamaha squad alongside Australian Josh Waters. It was also announced that the oldest rider in the championship, Chris Walker, will be lining up alongside the youngest rider in the championship, riding for Bournemouth Kawasaki alongside 19-year-old Danny Buchan.

But the bigger news is the Yamaha team for 2013.

Ellison last rode under Muir’s leadership in 2010 when a crash sidelined him for most of the season with a broken femur. Waters is two-times Australian Superbike Champion, and we know how that went last time when a fresh-faced Troy Bayliss arrived in the UK series and cleaned-up.

If signing Ellison and Waters wasn’t enough to give the team the boost it deserves after missing out on the BSB title with Tommy Hill in 2012, the new Milwaukee Yamaha squad will also run Willam Dunlop in the British Supersport Championship. Though we’re sure that Dunlop could be in contention for the BSS title, this move is more likely to secure the team a victory at the Isle of Man TT and NW200.

Ellison said: “I am really happy to be part of this team and the championship again as I feel that I still have unfinished business. I have seen how the championship has unfolded this year and I am really looking forward to coming back. The level of competition is definitely very high and you could see that from last season, but I know this is a strong team who are hugely capable and share the same goals. I am now looking forward to testing the Milwaukee Yamaha as the technical rules have changed since I last raced in BSB, which should suit me better as I prefer riding without traction control! I know I achieved a lot this year and now I am returning focused and confident about 2013. In 2009 I was second in the championship and I then joined SMR (Shaun Muir Racing) and we would have been fighting for the title if it hadn’t been for injury so I know that together we have the ability to put the Milwaukee Yamaha at the front; I am certainly not coming back to just make up the numbers!”

Waters said: “I am really happy and I still can’t believe I have been given this opportunity. I visited the Silverstone round this year and the championship was a big surprise to me as it is much bigger than I was expecting. I won my second Superbike title in Australia this year and I feel like that I have accomplished that goal and now I am ready for a new challenge. I am a realist and know that I am going to have to work hard at it this season but this is a huge step in the right direction for me, especially to work with a championship-winning team. I am hoping that the Showdown format will work in my favour as it gives me a chance to learn some of the tracks and I want to be in the top six. I can’t wait to get started and hopefully we can do enough to be there when it counts. I want to be successful in the championship and I am dedicated to succeeding with the Milwaukee Yamaha team.”

Milwaukee is an industry-leading manufacturer and marketer of heavy-duty, portable electric power tools and accessories.