Brookes talks ahead of Knockhill BSB 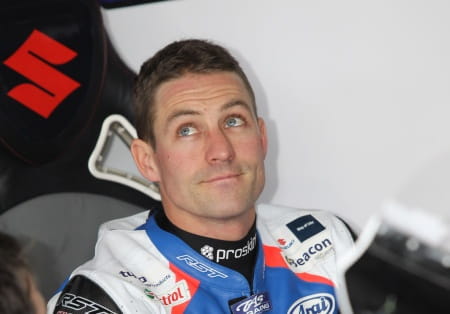 Tyco Suzuki’s Josh Brookes took on the Isle of Man TT for the first time this year, breaking Steve Plater’s record for the fastest ever newcomer lap and bringing his GSXR1000 home in 10th place in the Dainese Superbike TT.  The British Superbike frontrunner is back racing in the national series this weekend at Knockhill. We caught up with him ahead of his return to the short circuit scene to reflect upon his TT performance and find out how he’s prepared to take on the rest of the BSB season after over a month away.

You had an extremely successful debut at the Isle of Man TT, smashing the newcomers lap record and taking a top 10 finish in the Superbike race. You’ve got to be happy with your performance?

Yeah, I’m extremely happy, I did better than expected really. I didn’t really have any ‘official’ goals as it’s so different to what I normally do [short circuit racing], although I did secretly have my own expectations and I bettered those. It’s not just the speed either, I did a 127mph lap but I know I can go quicker than that, what’s more is I finished my first ever TT in 10th place, it’s a memorable achievement.

It was no real surprise when it was announced you were to take on the roads this year as you had previously made it a clear intention. At what point did you first start wanting to take on the Isle of Man?

Back in my first year in BSB, my team back then, Honda, asked if I’d like to go to the TT and I thought why not? A weekend away watching bikes and I could come home with a hangover! I hadn’t been in the Paddock for more than a couple of minutes before I knew it was something I had to do.

Your Senior TT was ended early with a technical fault with your bike. Do you think had this not happened you’d have beaten the record you set in the Superbike race?

Throughout the event my first sector was not the strongest but even though the bike broke down, my first sector  of the first lap in the Senior TT was the fastest I’d done so I know I could probably have gone faster.

What did you learn from your debut TT?

This weekend you go from the 37-mile mountain course to Knockhill, just over a mile long. Are you ready for the switch back to short circuits?

I’ve been racing short circuits for 10 years so it’s not really difficult to go back to what I’ve always done. The difficult thing was adapting to the roads, as that was new to me.

You currently sit 3rd in the BSB championship standings, having taken 4 podiums so far this season, twice in second place. Think you can clinch that first win of the year at Knockhill?

I’d like to but it’s racing, so there are no guarantees. Racing is exciting; you don’t know what’s going to happen. Both myself and the bike are capable, we just need to perform our best and have a hassle-free race.

Shane Byrne has won 4 out of the 6 races so far this season, what do you think it will take to knock him off that top step?

We have to beat him. Whatever standard he is setting, we have to match it. He’s the one at the top, he sets the bar and at the moment he’s setting it higher than anyone else and we have to beat or at least equal it.

For three years now, BSB have run the showdown system in which the top 6 riders after round 9 progress to fight for the title. Some riders have spoken ot against the system, what are your thoughts?

My views on the showdown have always remained the same, personally I’d prefer a conventional system but I understand that the showdown is designed to provide excitement. This can lead to more spectators, which means more interest in the sport and for teams and riders that could mean more sponsorship. We don’t make as much as competitors in other sports, I’m not complaining, if I was I’d go get another job, but if this ruling makes it better then so be it.

Do you have plans to return to the TT next year?

Of course, I had a great debut why would I not go back?