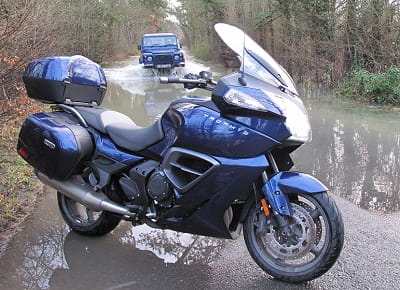 Think of a super tourer and you might go with Honda Pan European, Kawasaki 1400 GTR, a BMW R1200RT, but it’s unlikely that the first word that enters your head is Triumph, despite them knocking out Trophy’s for more than 21 years.

The original Trophy was Triumph’s first bike to roll out of the Hinckley factory almost 22 years ago. It was a bike so badly engineered it had an engine that sat awkwardly out to one side visible to the rider.

Triumph had only planned to use the bike’s frame for the three-cylinder 900, not a wider four-cylinder 1200 so the cylinder stuck out of the right-hand side. Not a great thing to remember, but I wanted to set the scene, and it’s merely to illustrate how far we’ve come, and how far the Trophy has progressed into the 2013 bike you see here. Unsurprisingly it’s a gem.

Thankfully Triumph has come a long way in the last twenty years. They’re now the biggest-selling bike manufacturer in the UK and feared and respected by their rivals. Not bad from a man in Hinckley who bought a motorcycle brand.

Unsurprisingly Triumph benchmarked the new Trophy 1200 against the BMW R1200RT, and because of that the Triumph is the highest-equipped bike in the range. I was lucky enough to run it for two weeks over the Christmas holiday break, putting in plenty of miles delivering gifts using the sizeable panniers and ridiculously plush levels of comfort.

In fact, it is so well equipped that the new Trophy 1200 SE offers on-the-fly WP adjustable electronic suspension way before any of the Japanese rivals have a similar system fitted.

There’s traction control, a 26-litre tank, Bluetooth, ABS, electronically adjustable screen, one of the gruntiest engines ever fitted to a big tourer, a virtually maintenance free shaft drive and even heated grips, pillion and rider seats as options.

There are two power points including one in the top box to charge your phone or similar, auto adjustable volume on the stereo (depending on the speed of the bike), a centrestand, and Bluetooth for connecting headsets or iPhones. You get the impression Triumph has thought about this bike a lot, and when you ride it you won’t be disappointed. 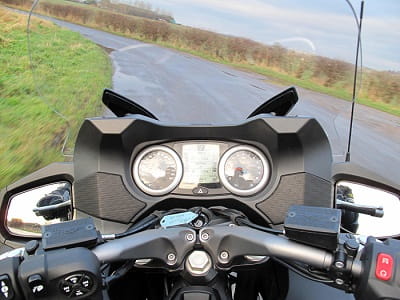 Never before have I ridden in the middle of a freezing December and early January and been so hot that I had to turn a heated seat off, and had turn the grips down to one as they pump out so much heat. But then Triumph’s Trophy 1200 SE is no ordinary bike. And did I mention you can get a heated seat for it? I did? Good. Let’s move on.

It will tackle most things, cover miles better than almost any bike I’ve ever ridden, and take you 300 miles in between tanks in ultimate comfort. The seat doesn’t feel that comfortable at first but the load gets spread out and the wind is merely a memory as you dial in the MASSIVE adjustable screen.

Tourers are never pretty. The reason they exist is to cover massive miles in huge comfort with very little wind resistance, that means a huge frontal area, a big screen and great wind protection around the knees. Somewhere in that mix of a big tourer styling often gets lost in the mix.

Just look at BMW’s RT, it’s a brilliant bike and what Triumph is gunning for with the new Trophy, but you can hardly call it pretty. So it’s testimony to Triumph that they’ve done a good job with how it looks. But it’s the way it rides that’s even more impressive.

On the move the Triumph brings new meaning to the class in terms of feel from the front-end of the bike and the way it handles. We’re not talking sports bike, but it’s definitely more sports tourer than full-on tourer. Triumph has a reputation for fine handling bikes, something their engineers and test riders pride themselves on and just like the Street Triple and new Triumph Daytona 675, this bike is the best handling bike  in its class. 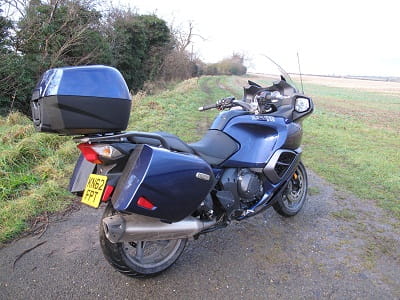 It’s some 42kg heavier when fuelled than a BMW R1200RT at 301kg (664lb) quoted wet weight with a full tank, but one you’re over that initial OMG this thing is massive, and heavy, and above 20mph, you don’t notice the bike’s weight. It’s not often that you can hustle a bike of 300kg around, but this one physically carves corners.

There’s great feedback from the accurate steering and the Triumph Electronic Suspension means you can set it up on the fly for different weights, loads, or moods. Feeling relaxed? Soften it up. Want to get somewhere a bit more sprightly, then firm it up. The suspension isn’t the plushest I’ve ever felt, but the touch-button settings certainly make a big difference.

The biggest compliment I can pay the shaft drive is that I barely noticed it as it feels 95per cent like a chain driven bike and reacts in the same way under power or braking thanks to clever rear suspension linkage.

On the move it’s easy to be bamboozled by the array of buttons and switches changing everything from the radio to the suspension, trip meters, clocks, fuel economy readings, traction control and cruise control;. But after a couple of hours in the saddle it all becomes simple to find your way around.

The fairing is all encompassing and with a fully electronic height adjustable screen it’s like sitting behind a car windscreen most of the time. It’s only in sidewinds that you notice what a huge fairing you are trying to push through the air.

The motor is thankfully more than manly enough to cope with anything December and January can throw at it. The 1203cc three-cylinder motor makes a huge amount of torque at 89ftlb and with 132bhp there’s more than enough for any tourer. It makes rapid progress, is smooth on a run, and growls from the airbox when you rev it.

At speed, sixth is almost like an overdrive but it’s got plenty of grunt to go for an overtake on the motorway without changing down gears.

In fact, it’s hard to fault the Trophy 1200. The panniers are incredibly large, the top box could fit a small child in, the seat is ultra-comfortable, the fairing will keep the worst off any weather off you, it handles well, the motor is a peach, it has attitude and pillions will want to marry you if they haven’t already.

Triumph is on a roll right now and with the new Daytona 675, the Street Triple, the success of the Tiger Explorer and now this, it’s hard to see where they’re going wrong. They've certainly got it very right with the new Trophy 1200SE.