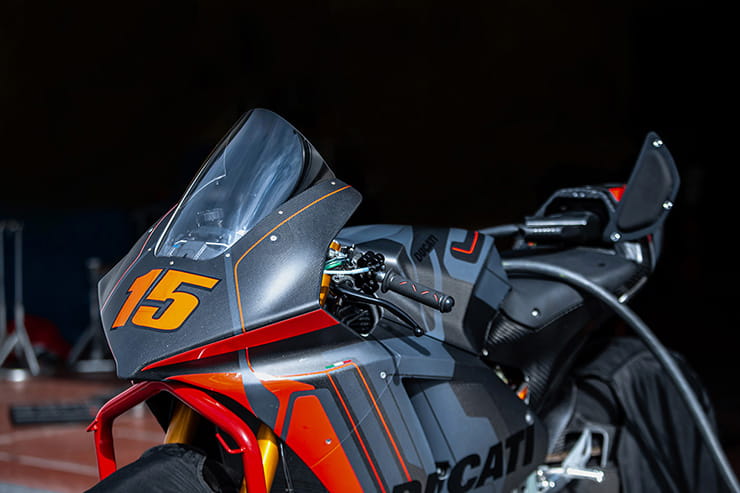 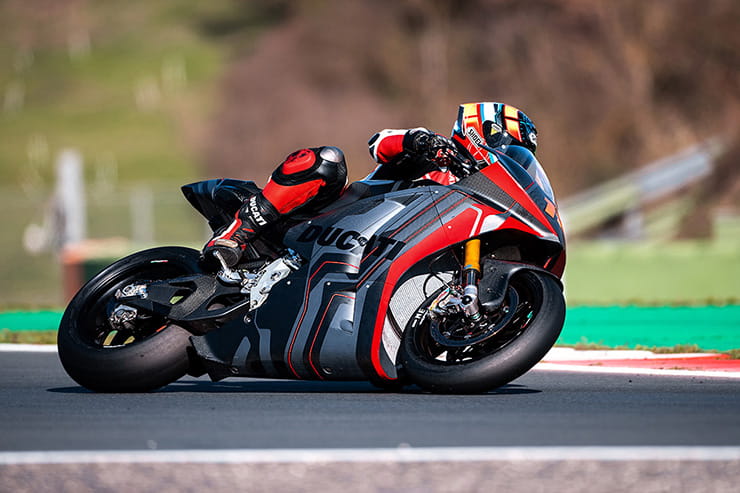 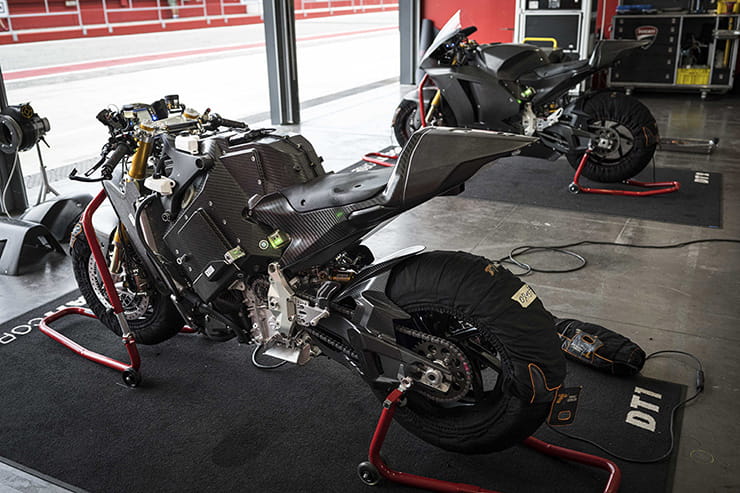 From 2023 Ducati will replace Energica as the sole supplier to the one-make MotoE World Cup electric race series and the company has now taken the wraps off the V21 L racer that will fill next year’s grids.

While Ducati has previously released images of the bike on track, the new release reveals the machine’s construction and specifications for the first time, confirming that it will make 150hp and weigh an impressively slender 225kg – 12kg less than Dorna and the FIM required. As usual for an electric bike, it’s also a torque monster, peaking at 103 lb-ft. That’s 12 lb-ft more than a Panigale V4 can muster, and since electric bikes concentrate their grunt at low revs it means we can expect the V21 L to be spectacularly fast off the line.

All those numbers mean that, during testing at Mugello, the V21 L has managed a top speed of just shy of 171mph – around 11mph more than the Energica Evo Corsa currently used in MotoE can achieve. 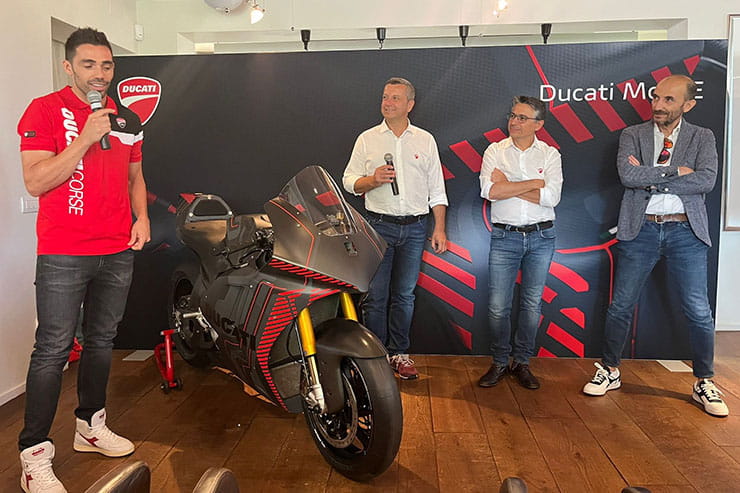 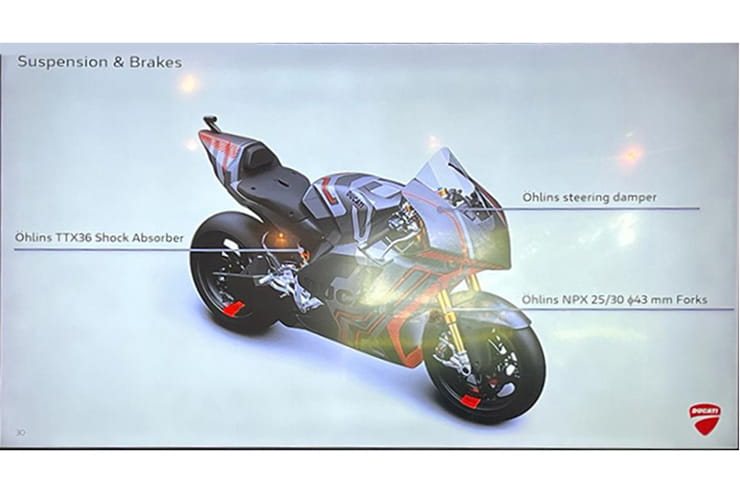 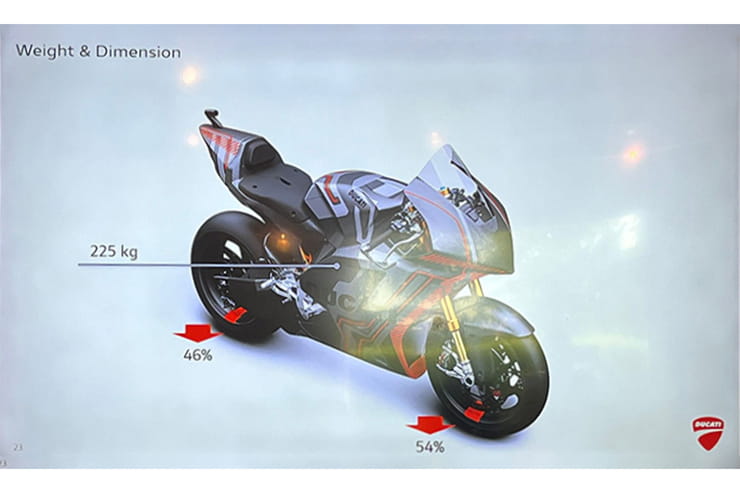 Claudio Domenicali, Ducati CEO, said: “A few weeks ago I had the extraordinary opportunity to ride the Ducati MotoE on the track and I immediately realized that I was living in a historic moment. The world is going through a complex period and environmental sustainability is an element that all individuals and all companies must consider a priority if we want to preserve the delicate balance of the planet. As Ducati, we have grasped this need and we went in search of a challenge that would allow us to contribute to the common goal of reducing CO₂ emissions and at the same time to keep faith with our DNA linked to racing. We agreed with determination to develop the most performing electric racing bike that current technology makes possible and to use this project as a laboratory in which to build our future. The result we have achieved is surprising. As soon as I sat on the bike I realized the quality of the work done by the team and when I returned to the garage I felt a deep sense of pride for what we were once again able to achieve.” 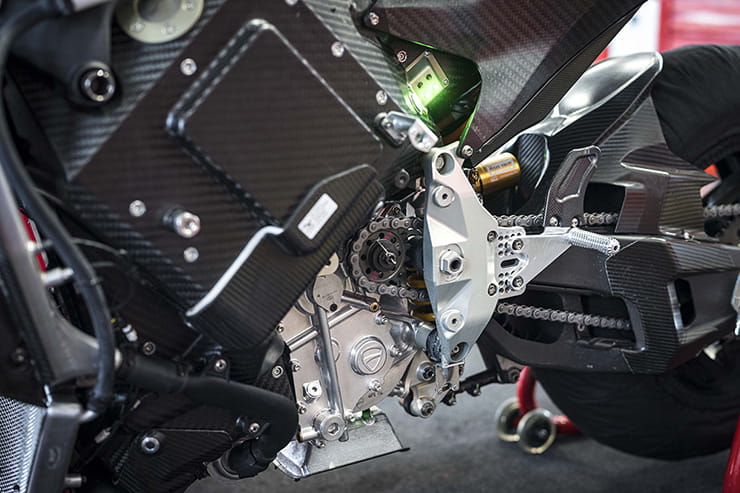 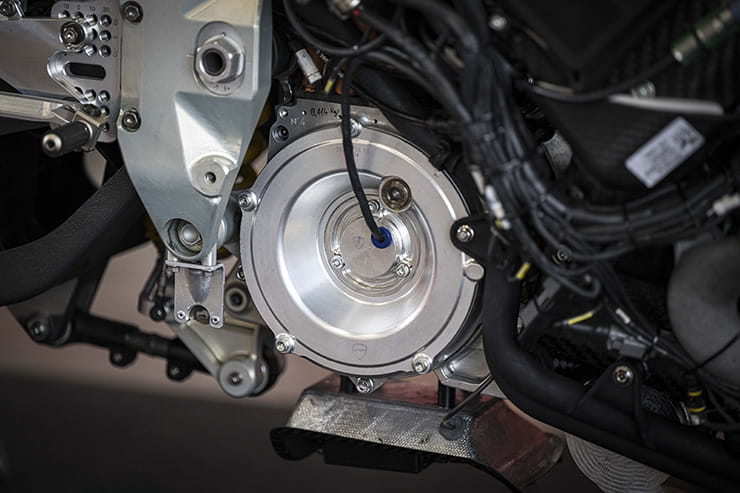 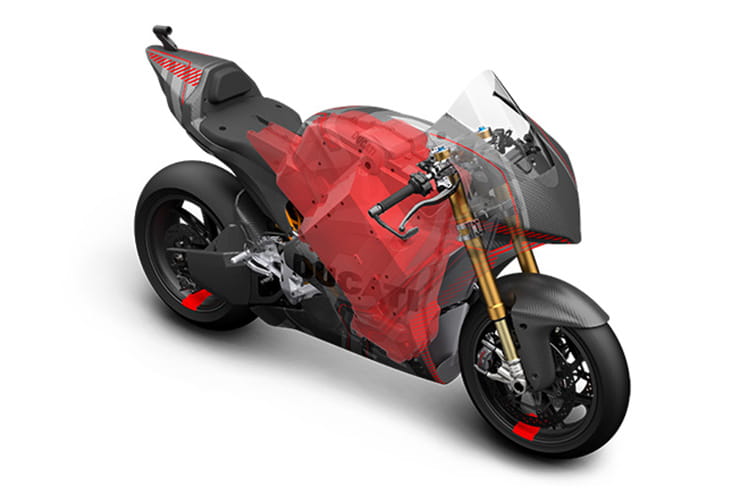 Under-the-skin images of the V21 L show that it’s adopted what’s fast becoming the standard layout for high-performance electric bikes, with a structural monocoque section housing the battery and bolt-on subframes front and rear to carry the steering head and seat unit.

While more mass-made electrics, like the LiveWire S2 Del Mar that also uses a structural battery case, use alloy for the chassis, the V21 L has a carbon battery pack monocoque, while the front frame section is cast alloy. That front subframe weighs only 3.7kg, while the swingarm – also alloy – is just 4.8kg. The battery pack itself is made up of 1,152 ‘21700’ cells (each 21mm in diameter and 70mm long), similar to those used by Tesla. It weighs 110kg and has a capacity of 18kWh. For comparison, the battery in Zero’s SR/F has a 15.6kWh capacity while the new Energica Experia has a 22.5kWh pack, so the Ducati’s is right up there with the best of today’s production electric bikes.

A 20kW charging socket in the tail allows the pack to be charged to 80% capacity in only 45 minutes. 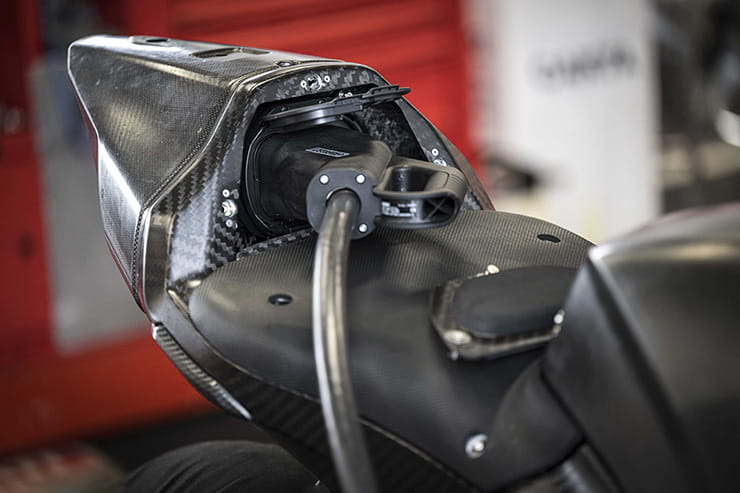 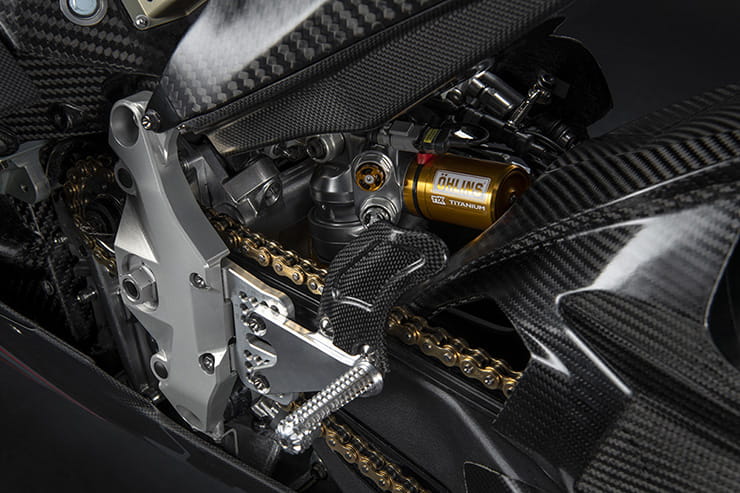 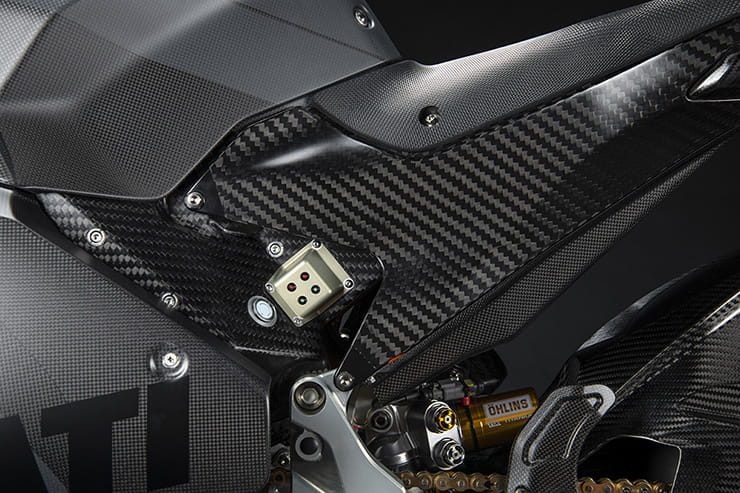 An inverter under the seat takes a voltage of 800V to the motor, mounted below the battery and weighing only 21kg. That motor revs to 18,000rpm and drives through a single speed transmission.

The motor/inverter and battery pack each have their own liquid cooling circuits, reflecting the fact that their ideal operating temperatures are different.

Vincenzo De Silvio, Ducati R&D Director, said: “For Ducati, having the opportunity to become suppliers of the FIM MotoE World Cup is not only a technologically exciting venture, but also the best way to interpret the challenges of the new millennium. Racing competition represents the ideal terrain on which to develop innovative technologies that will then transfer to production motorcycles. At this moment, the most important challenges in this field remain those related to the size, weight, autonomy of the batteries and the availability of the charging networks. Ducati's experience in the FIM MotoE World Cup will be a fundamental support for product R&D, together with the physiological evolution of technology and chemistry. Helping the company's internal expertise to grow is already essential today to be ready when the time comes to put the first street electric Ducati into production.” 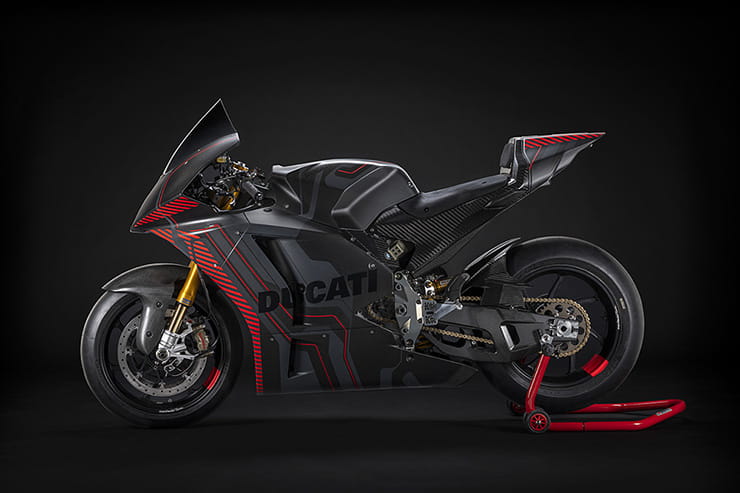 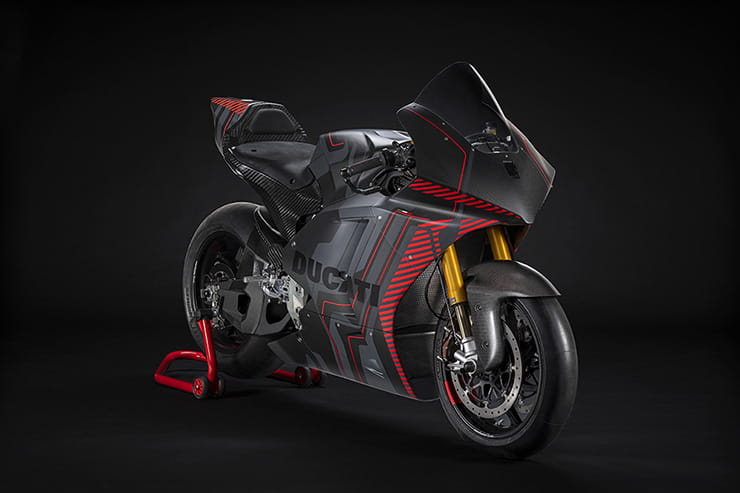 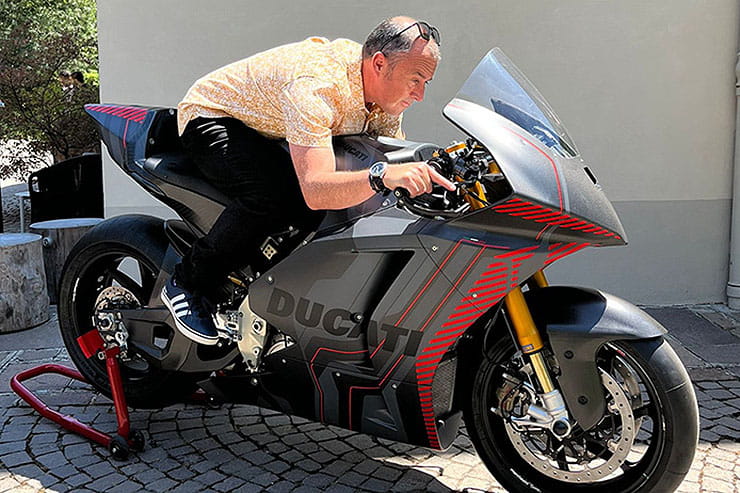 Away from the futuristic central chassis and the electric powertrain, the V21 L uses familiar, high-end components including 43mm Öhlins NPX 25/30 forks and a TTX36 shock, both similar to those on the Superleggera V4, along with an Öhlins steering damper. The brakes are Brembos, as you’d expect on a Ducati, with unusually large 338.5mm front discs that are also thicker than the norm and feature fins on their internal diameter to improve cooling. GP4RR M4 32/36 calipers and a PR19/18 master cylinder complete the front setup, while at the back there’s a 220mm disc and P34 caliper, with an optional brake lever on the left bar rather than the right foot (since there’s no need for a clutch).

The electronics include traction control, slide control, wheelie control and maps for the throttle and brakes, similar to those on conventional race bikes, and have been developed with the help of riders Michele Pirro, Chaz Davies and Alex De Angelis.

While there’s no official plan for a road-going Ducati electric bike in the near future, the V21 L clearly shows a direction that such a machine could take, and with 18 bikes competing each weekend during the MotoE season next year Ducati will gather invaluable data to help with the development of such a machine.