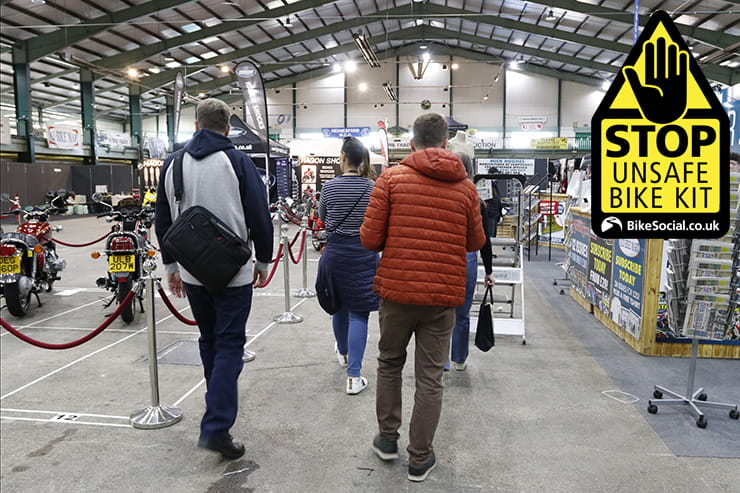 Interventions are clearly having an effect, with Trading Standards officers not needing to deal with the same level of problems as were seen at the London show

Since 21 April 2018, all motorcycle clothing has had to be tested and certified as personal protective equipment. It’s the law, and it’s why all jackets and trousers should have a label in like the one below, with either an A, AA or AAA on it. We’ve got a handy article explaining all the labels you’ll find in kit here. 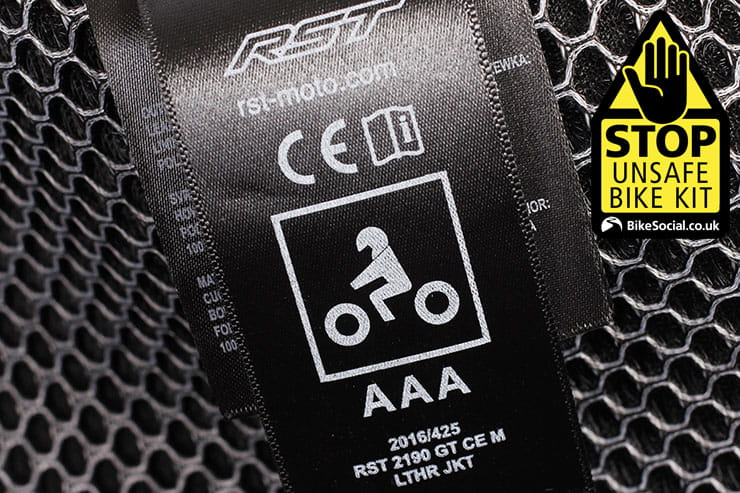 With a few exceptions (explained here), all jackets and trousers should have a label with this pictogram on, and an A, AA or AAA, indicating the level of protection offered.

But some sellers and even a handful of brands have ignored the legislation put in place to protect riders, offering uncertified kit that has no guarantee of its safety. Which is why Bennetts BikeSocial launched the Stop unsafe bike kit campaign after protective equipment consultant and technical director of PVA-PPE Group, Paul Varnsverry attended the MCN London Motorcycle Show with Newham Trading Standards, which saw products removed from sale and interventions with several less scrupulous businesses. 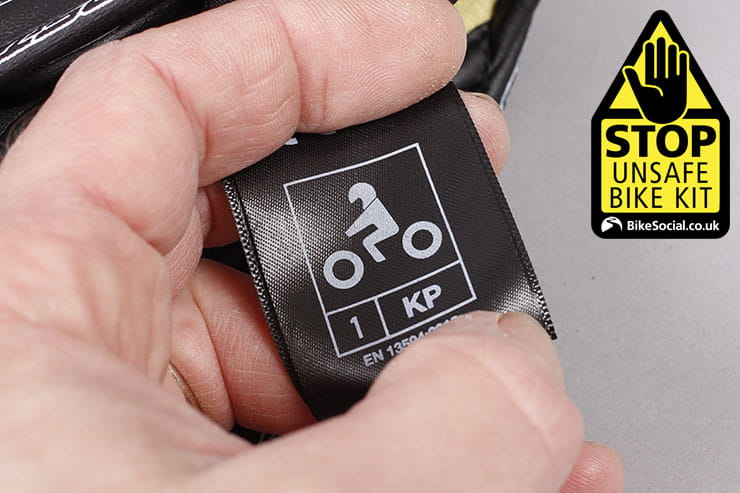 Gloves are tested to a different standard, and must have a label like this in

Action taken by Trading Standards at the London show sent shock-waves through the industry, evidenced by there being a sudden and very clear drop in the number of stalls selling illegal riding kit at the subsequent Bristol Classic Show. “The clamp-down by officers from Newham Trading Standards had a seismic effect on sellers across the UK,” said Paul Varnsverry. “Traders are starting to realise that they could face serious consequences if they continue to sell uncertified kit, which provides no guarantees that it can protect a rider in a crash.”

The more recent Stafford Classic Bike Show is one of the highlights of the year, with some of the most beautifully restored bikes in the world on display, as well as stands offering tools, parts and memorabilia. And riding kit. 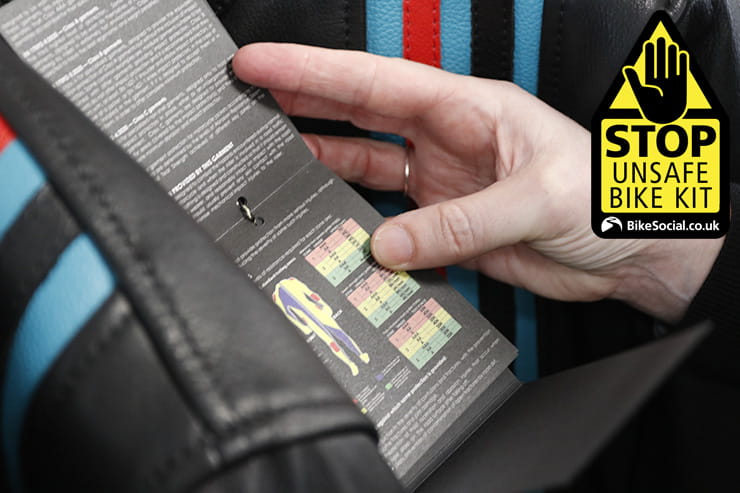 Staffordshire Trading Standards officers checked the certification of kit throughout the show. The majority, like these Goldtop jackets, were properly marked. In fact these meet the highest AAA standard under EN17092.

The organiser of the show, Mortons Media, has been very clear regarding its stance on uncertified kit being sold at its shows, with Nigel Hole, Commercial Director of Mortons Media Group telling BikeSocial “We as a business fully support this national initiative and we have already taken steps with Trading Standards to ensure that retailers at our shows comply with the current legislation.

“In terms of the impact of the initiative, I think it will be nothing but a positive one. The trade and more importantly the visitors to any event, not just Mortons shows, will be much happier knowing that motorcycling garments, gloves, footwear and impact protection components retailed, meet the very latest safety standards. I would also advocate that any biker buying their own motorcycle gear, be it from a shop or a show, should always check for the CE and/ or the UKCA markings.

“Making our hobby as safe as possible has to be a number one priority for all of us in the industry.”

Mortons’ stance was confirmed at its Bristol show in February, with no sellers offering non-conforming kit at the event. Mortons’ contracts with stall-holders are very clear, though while the vast majority of sellers at the Stafford show did have the correct certification on their kit, the investigators did still speak to some, taking their details and handing out guidance sheets compiled by the British Safety Industry Federation (BSIF). 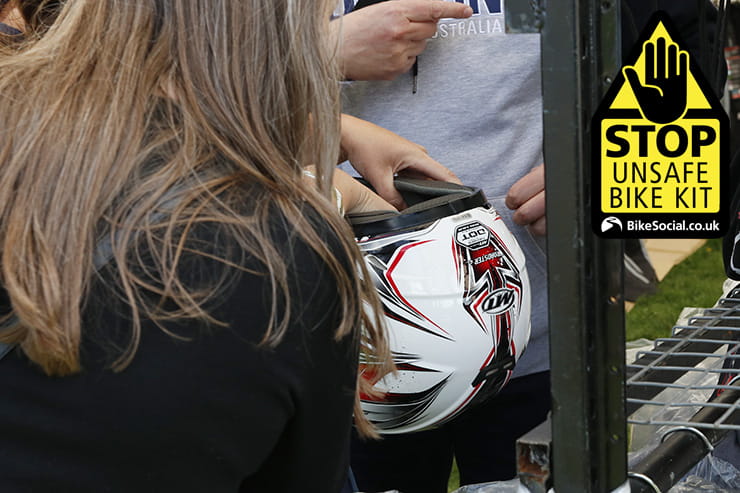 “Today’s gone really well,” one of the Staffordshire investigators told me. “We’ve seen a really high level of compliance, and we’ve had really positive feedback. Traders have generally been very receptive, with only one not being quite so pleased to see us.

“There has been a small amount of non-compliance, but we’ve been able to give lots of business advice, and pointed sellers in the direction of their local Trading Standards services where they can obtain formal advice in a written format to help them. We’ve also removed some counterfeit items, helping to protect consumers.

“We would rather be working alongside businesses to guide and support them, than having to take costly and time-consuming formal action. However, when products are found to be unsafe we will do all that is necessary to remove them from sale.”

This action has been another warning shot across the bow of those willing to ignore the law and potentially gamble with the safety of British riders. It’s a great result to see none of the more serious problems of other events, which bodes well for the rest of the year. We’ll continue to report on the upcoming shows in our safe riding kit main campaign article here, but you can also notify Trading Standards via the online form here, and let us know if you have any concerns by emailing us. 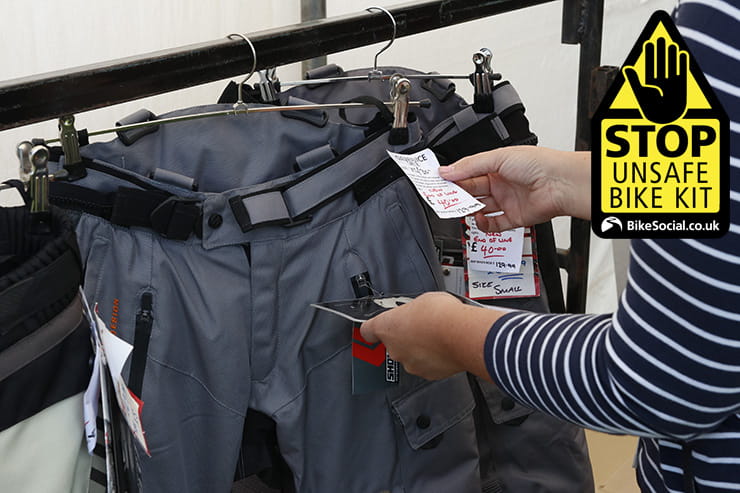 Why is there still unlabelled kit on sale?

Technically, there is no reason for uncertified kit to still be on sale as the legislation came into force more than four years ago. However, there is something of an informal amnesty that allows old stock to be cleared. This means that anything that entered the market before 21 April 2018 can continue to be sold until it’s all gone.

It’s entirely possible that some traders will claim the products on their shelves and racks are ‘old stock’, but this excuse will only wash for so long. And Trading Standards officers are well within their rights to demand to see invoices proving when this stock was bought.

It doesn’t matter where the products came from – imported direct, from an official distributor or from a wholesaler – any seller has a legal duty to ensure the goods they offer meet the applicable laws.

While it’s no guarantee, if the products are from a genuine, well-known motorcycle brand (and they’re not fake), and they have no PPE labels in, there’s a chance they might be old stock. If it’s a brand you’ve never heard of, there’s potentially more of a chance that it’s cheap kit that could be un-tested and of unknown safety. 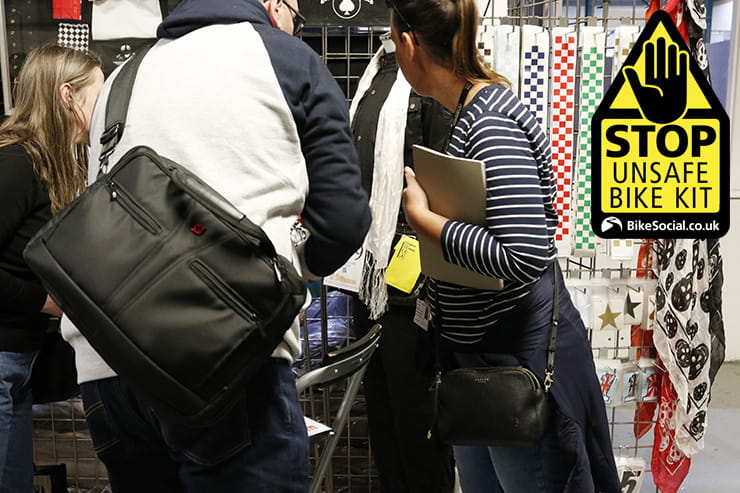 What about all the un-certified kit for sale online?

We’ve found fake armour in leathers sold on Amazon, and Facebook is regularly promoting illegal riding kit through paid advertising, not to mention the products available on eBay and even in some stores. So why the focus on shows?

With sellers all in one place, it’s easier for Trading Standards investigators to speak to more of them in a day, but it’s also just the first step. With traders, organisers and – most importantly – consumers, more aware of the law, the truly non-conforming kit that’s brought in with scant regard for rider safety will be pushed deeper online. While this doesn’t protect everyone, it helps make a better environment at shows, but it also creates a clearer message to buy from reputable stockists, and to check what you’re getting.

Long-term, there’ll still be un-tested riding kit for sale, but the relevant Trading Standards offices will be able to focus attention on these sellers and the platforms they use. 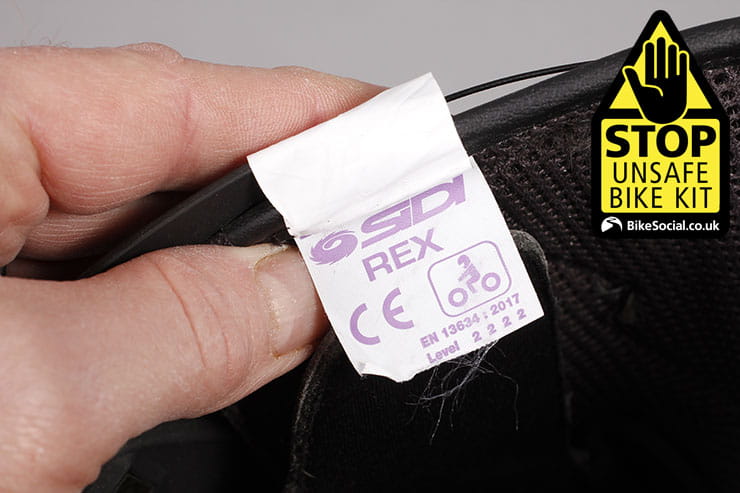 Any boots sold as being for motorcycle use should be labelled up like this. Without proper testing, there’s no guarantee that they’ll protect your feet, be that from abrasion, bursting open, or crushing if the bike fell on your foot in a slide.

How to protect yourself from un-tested motorcycle clothing

Before buying any riding kit, be it from a stand at a show, online or in a shop, always check the labels. We’ve shown a few examples in this article, but click here to find out more.

It’s illegal to sell uncertified kit (unless it’s genuinely old stock), but it’s not illegal to buy it, so the choice is entirely yours. However, please do consider carefully the price you’re paying, and the price you could pay if the worst happened; if the kit’s not been tested and certified, there is no way of knowing whether the claims made by the seller or the manufacturer are true.

There are still bargains to be had, and the A, AA and AAA ratings are not the ultimate guide to safety, but they do serve a very valuable purpose. And you have to question the motives of anyone who tries to ignore them.

If you find what you believe to be illegally-sold un-certified riding kit, be it jackets, trousers, helmets, gloves or boots, you should report it to Trading Standards via Citizens Advice; there’s an online reporting from here. 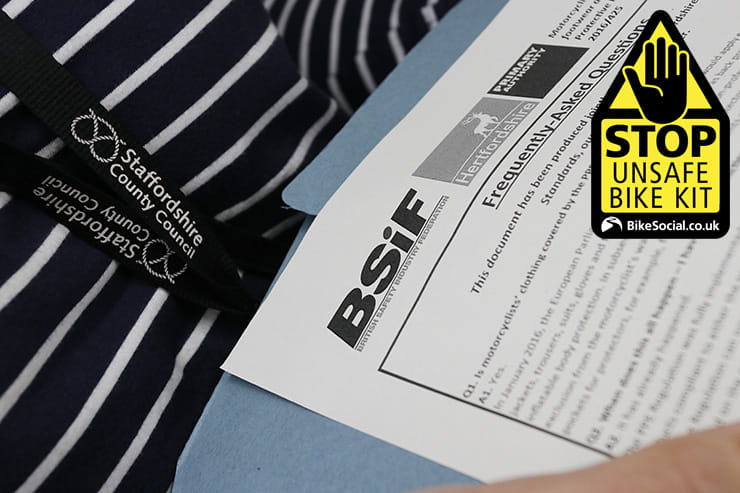 What does Trading Standards do?

Each Trading Standards service is run by the local council, so while there is some communication between them, it’s not fully centralised; each service is responsible for its own area, be that a metropolitan/unity authority, or a county one.
Team sizes vary hugely, meaning some are able to react more quickly in different matters than others, but as with so many vital UK resources, they’re often stretched very thinly.

We were fortunate to attend the Stafford Classic Bike Show with officers from Staffordshire Country Council, giving us a unique opportunity to find out how they work.

“People think that Trading Standards just prosecute people, but it’s far more about advising businesses on how to do things properly.

“We cover animal health, food standards, animal feed hygiene, doorstep crime, fraud, rogue traders, scams, business compliance, weights and measures, petrol stations, explosives, product safety, housing legislation… it’s a very wide field but basically it’s about ‘fair trading’ to ensure that what a consumer is buying is correct and safe,” one investigator told me as we walked around the show.

And that’s far from all of it, so while the team at Staffordshire is relatively large due to its significant geographical reach, the officers have to cover a massive range of subjects.

When anyone reports a matter via the Citizens advice online form, this is effectively triaged before being passed to the relevant team. 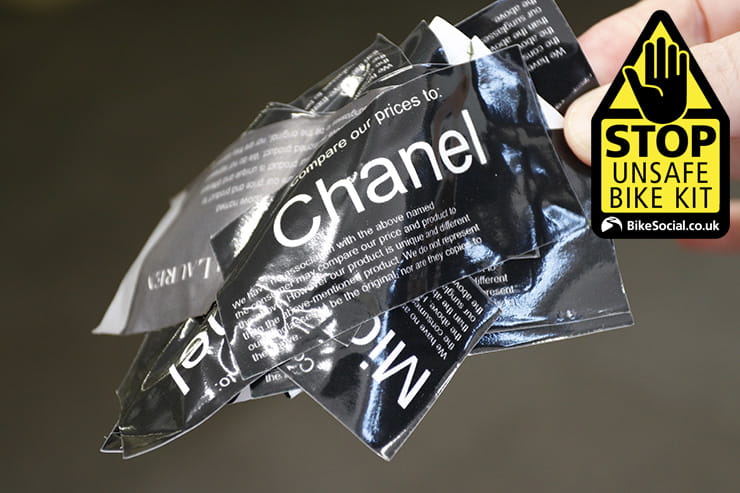 Trading Standards investigators aren’t just looking for uncertified kit at motorcycle shows; they’re also quick to pick up on copyright infringement. These stickers were taken from a stand that expected buyers to read some very small print to understand that the glasses on sale were not from big-name fashion brands.

In very much the same way that the police encourage people to report all crimes, all information passed to Trading Standards helps to build the intelligence pictures that can lead to action down the line. With Staffordshire officers having task meetings every fortnight to discuss trends, they’re able to dedicate resource where it’s most needed. “We’re very fortunate in that we have such a good intelligence function with an excellent, dedicated officer,” I was told.

“Rogue traders and vulnerable consumers are always going to be high on our agenda, as well as food safety, but we’re able to allocate our resource where it’s most valuable.

“The breadth of area we cover means we have to have a very wide knowledge, and prioritising is a challenge, but that’s why our tasking meetings are so important.

“Ultimately, protecting consumers is our number one priority, as well as ensuring a level playing field for businesses.”