Have we taken a step back in rider safety? The problem with CE standards 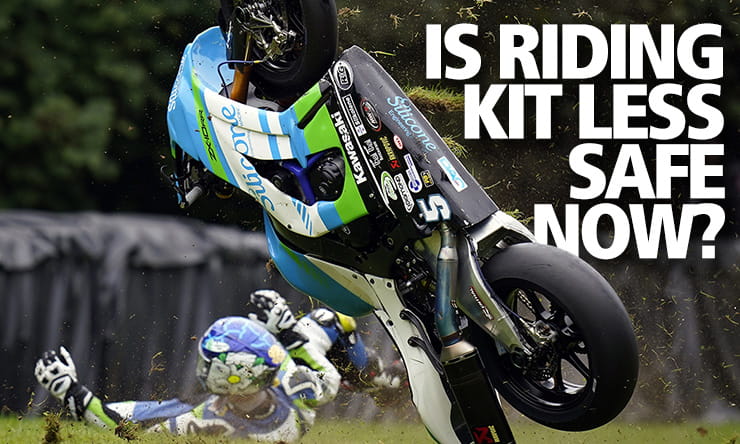 BikeSocial has discovered that the testing standards now used to certify motorcycle riding kit have reduced protection levels by as much as 90%.

Work carried out by leading scientific experts has compared relative abrasion resistance times in testing under the old standard – EN 13595 – with results achieved by garments certified to the new one – EN 17092 – and this has revealed significant reductions in the severity of the headline test for abrasion resistance.

How is motorcycle kit tested for safety?

Riders are actually, in general, better placed to buy riding kit than they were before the law changed on 21 April 2018, and some provably sub-standard kit has been taken off the market thanks to it all now being classed as Personal Protective Equipment (PPE). But a little background is needed… 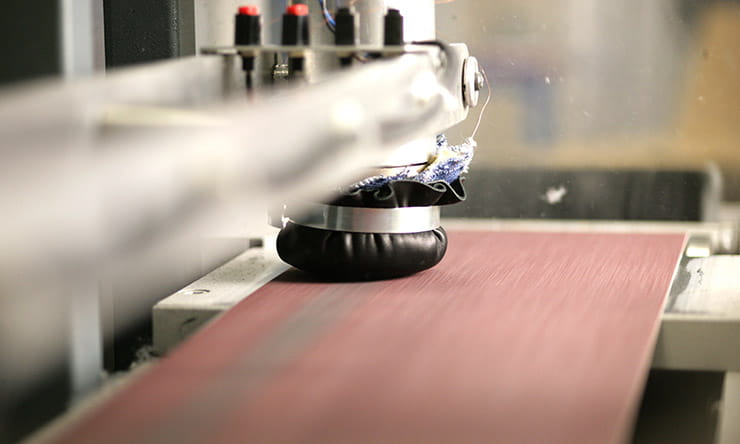 The Cambridge machine was the benchmark for abrasion resistance until 2018

Since 1994, any piece of motorcycle riding gear that was described as protective should have been demonstrably able to meet a CE standard. In the case of jackets, trousers and leathers, that meant certifying to EN 13595, which included abrasion testing on the ‘Cambridge’ machine, which used a specific grit of sanding belt at a specific speed. The problem was that the original legislation was ‘voluntary’, and motorcycle clothing manufacturers could avoid having to test their kit as long as they did not claim in literature or advertising that it was protective. This led to a lot of brands ignoring the standards developed to help the motorcycle clothing industry comply with the legislation, but confusion crept in for consumers (being blunt, confusion was encouraged by some brands), which meant that companies would claim their kit was protective without proving it.

By 2016, the European Parliament had had enough of the deception, and when new legislation was passed in January of that year, it came with an announcement that compliance would be compulsory for motorcycle clothing manufacturers.

The existing European Standards working group quickly set about developing a new set of testing standards that are more achievable, based on the test performances of materials in use in 2016 and would consequently make it easier for clothing producers to meet their legal obligations.

While a garment has to pass tests for seam strength, tear-resistance and other important criteria, the most notable change to the certification process, and the one we’re focussing on here, is how abrasion resistance is tested. 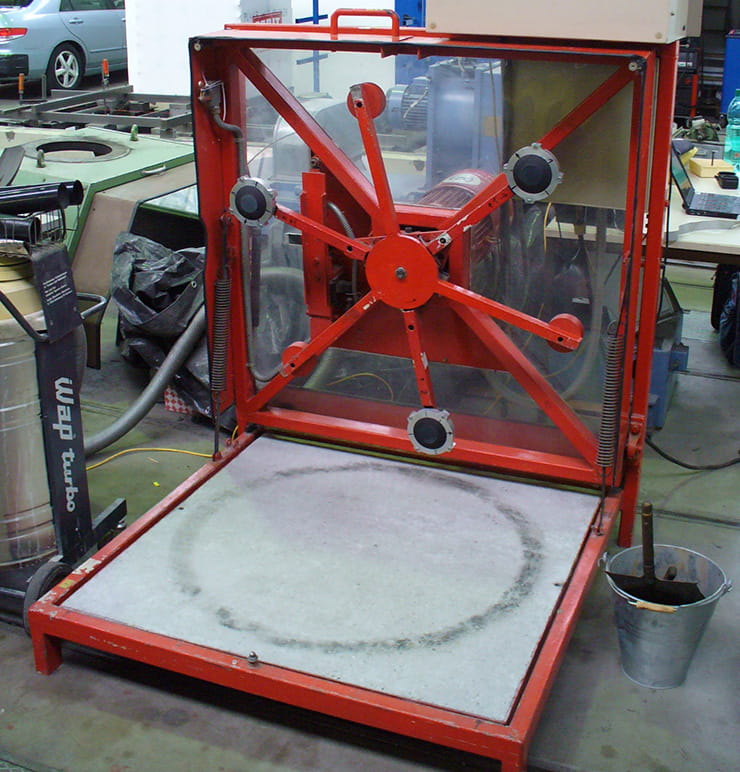 The Darmstadt machine is now used in abrasion testing

Under EN 17092, sections of a garment are spun on a ‘Darmstadt’ machine at set speeds, before being dropped onto a concrete surface. After the test, if there’s no hole larger than 5mm, it’s a pass.

Combining this abrasion test with the seam strength, burst tests and the other parts of the certification process leads to three levels that riders are most interested in:

How does old riding kit compare with new kit?

While some shops and brands might try to claim ‘slide times’ in product descriptions, this is not – and never has been – an honest or useful indicator to buyers.

How long a garment lasts on a testing rig is in no way an indication of how long a rider might slide down the road in a crash; there are way too many variables. The data gathered is only ever a comparison of abrasion resistance. In fact, it would be better not to put a unit of measure on it all for the public – stating seconds on a rig makes people relate that to seconds sliding down the road; it’s simply not relevant, no matter what a shop selling jeans might claim.

However, during the original discussion to establish EN 17092, comparisons had to be made between the abrasion test results from the Cambridge machine, and those from the Darmstadt machine. The understanding at the time was that an equivalent to the high performance required by EN 13595 would be reflected in a level for EN 17092, but it never appeared, thanks in some part due to push-back from some manufacturers.

But now, using test results of current garments carried out on the Darmstadt AND Cambridge machines, relative abrasion resistance results have been shown to be as much as 90% lower to meet the new standard.

The areas (or zones) of a garment that are tested to certain levels have been changed, but direct comparisons can be made: 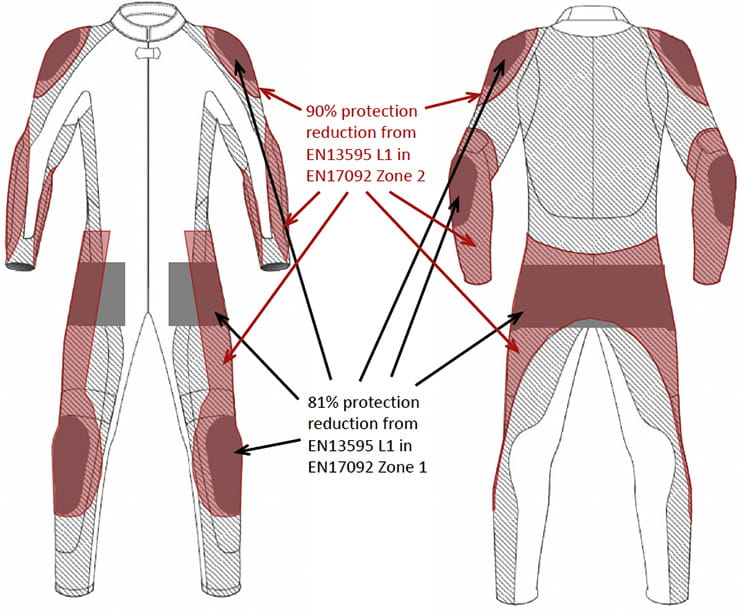 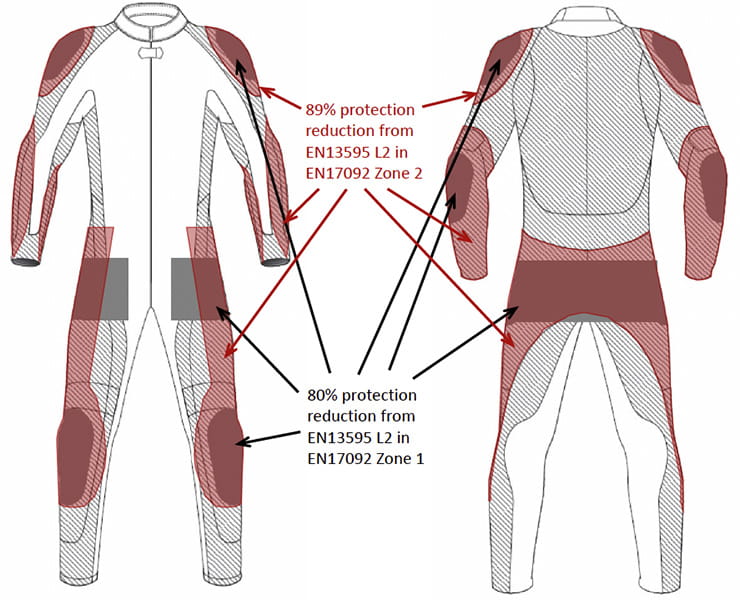 This information was compiled using the data gathered from samples that have passed testing on the Darmstadt machine, then running the same materials on the Cambridge machine to create and equivalent abrasion resistance score. They must NOT be considered ‘slide times’, but they do show how the two standards compare. 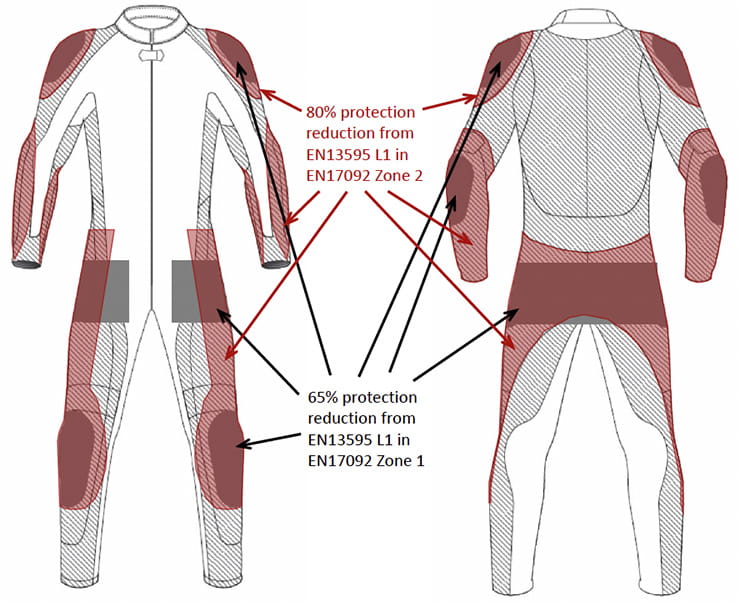 The numbers are rather worrying, but remember that a pass at AAA level is the minimum standard, just like EC 22.05 in helmets (and the much tougher EC 22.06). A garment might exceed the standards, which is why a higher level would be useful. Note also that to pass EN 17092 AAA, the backside comes under Zone 1, whereas in levels A and AA, it’s part of the less-tough testing of Zone 2. 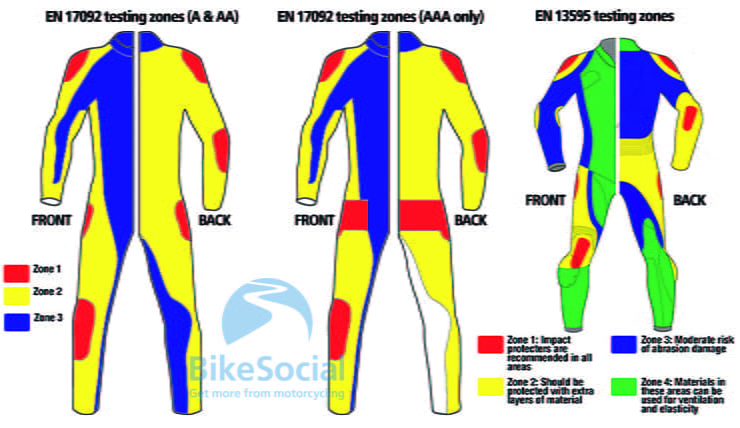 The testing zones of a garment have changed, but the key areas can be compared

No, riding kit is not less safe now. If anything, riders have greater choice of – generally – better and safer riding kit than ever before. Legislation demands that riders are informed of what level of protection a garment offers, which makes it easier to make a wiser buying choice.

However, this data clearly shows that there’s still a need for a higher standard. BKS, for instance, offers textile riding kit (and leathers, of course), that beat the high abrasion requirements of EN 13595 Level 2, so it can be done. But that standard is being phased out, and there’s been resistance from some to have a tougher standard as it can show up products that might have a reputation for safety, but prove not be as high-performing as expected.

While brands could carry out their own testing, this potentially leaves it open to the same dishonesty that we saw during the 1990s and 2000s, with claims made that haven’t been independently verified.

Fortunately, there are plans for EN 13595 to be replaced with a new BS 13595 for ‘high performance’ motorcycle clothing; something the National Police Chiefs Council and individual Police forces have been calling for in order to protect their riders.

Of course, it should also be appealing to leisure riders seeking the ultimate in safety kit.

The standard won’t be compulsory, and EN 17092 will continue to provide a minimum set of requirements, but BS 13595 will give those manufacturers who take up the challenge and use it, the chance to show just how protective their kit can be, which can only be a good thing for us all as riders.

It’s all about informed choice.