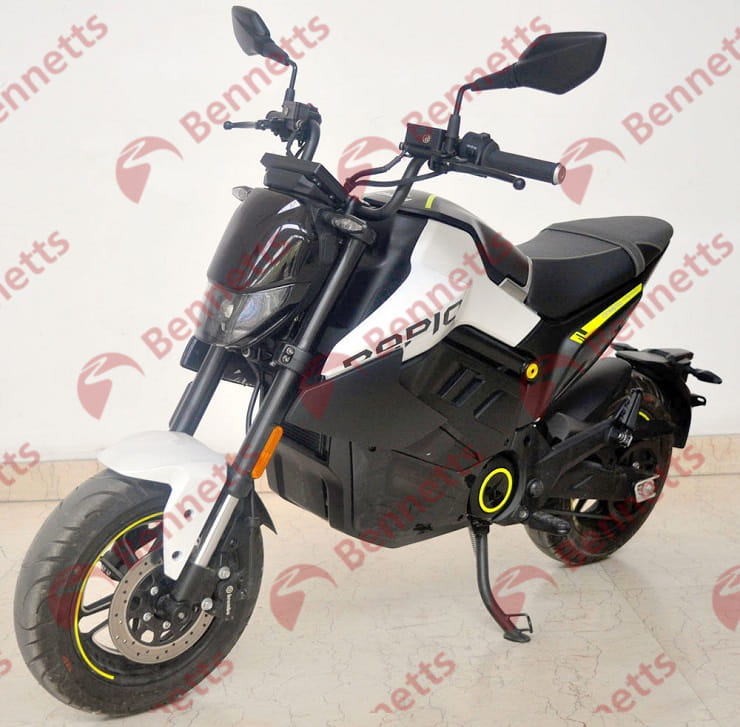 There’s no doubt that user-friendliness and the unintimidating fun that’s offered by Honda’s Grom is one of the secrets to its success – and what could make it even easier to ride would be the adoption of electric power instead of a petrol engine.

Last year we reported on Honda’s plans for a Grom-style electric offering but the firm has been beaten to the punch by Chinese rivals. Zongshen already makes the ZS1500 – sold here as the Lexmoto Cypher 1500 – which sits in the Grom mould but is limited by moped-style performance and a 30mph top speed, but now CFMoto is on the verge of launching a 125cc-equivalent electric minibike in the form of the electric Papio.

Although not offered in the UK, CFMoto already makes a petrol-powered Papio, using a 126cc single and matching the Honda Grom in terms of performance and dimensions. The electric version seen here is completely new, though, with its own dedicated chassis, suspension and styling, and it’s just been type-approved in China, suggesting it will be ready to go on sale imminently.

In terms of size, the electric Papio is near identical to the Grom and the existing petrol-powered Papio model, with a 1770mm length and 1238mm wheelbase. Like the two conventional bikes, it also has 12-inch wheels with 120/70 front and 130/70 rear tyres, while the upside-down forks put it a step ahead of its petrol-powered sister model and on a par with the Honda. The brakes might not be the radial calipers that Honda offers on the latest Grom, but they are from Brembo, which adds to the impression that it’s a quality offering.

When it comes to performance, the electric Papio has a nominal 5kW electric motor, which equates to 6.7hp. That’s a fair bit less than the 9hp-plus offered by the Grom and petrol Papio, but as with all electric bikes, the rated figure isn’t likely to be representative of the machine’s actual peak power. The motor comes from Blue Stone New Power: scanning that company’s product list reveals that its standard ‘5kW’ motor, driven by a 72V battery, is good for a peak of 19hp for brief periods. That’s double the peak of its petrol equivalents.

The bike’s top speed, 64mph, is on the money for a 125cc, learner-legal petrol machine, and while it’s 21kg heavier than the flyweight Grom the electric Papio’s 124kg mass isn’t exactly vast.