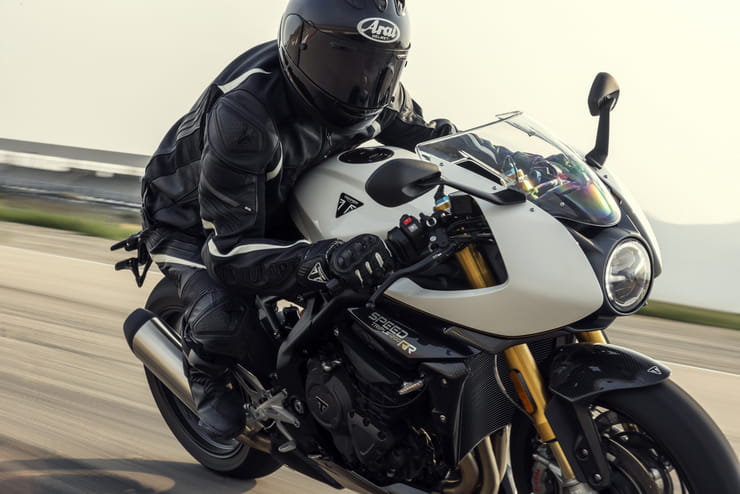 While Triumph is still shying away from creating a Daytona superbike around its new 1160cc triple the firm has taken a step in that direction with the launch of the stunning Speed Triple RR.

Although the bike doesn’t come as a complete surprise – the firm has been teasing its existence for weeks – its official unveiling confirms that it’s not some ultra-expensive, limited-edition ‘TFC’ machine but a full-blown production model. And it will be fascinating to see how successful it is; sales of out-and-out superbikes are still in the doldrums, while ever more powerful naked machines are thriving, so how will buyers respond to a half-faired version of the Speed Triple complete with low-slung clip-ons, repositioned pegs and 177.6bhp on tap? 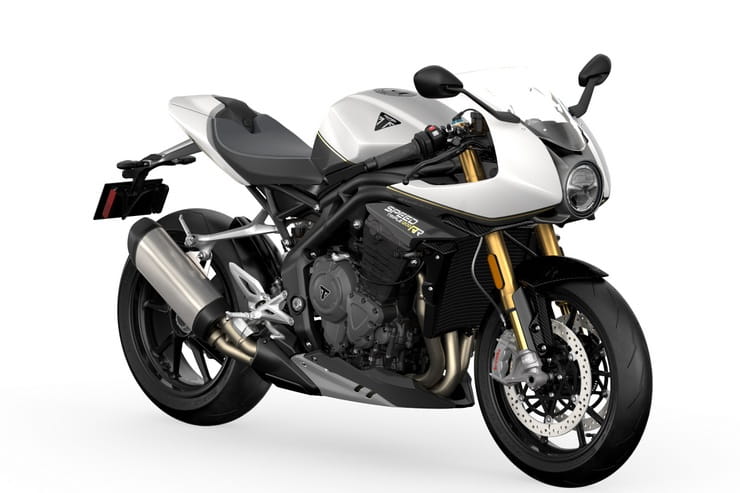 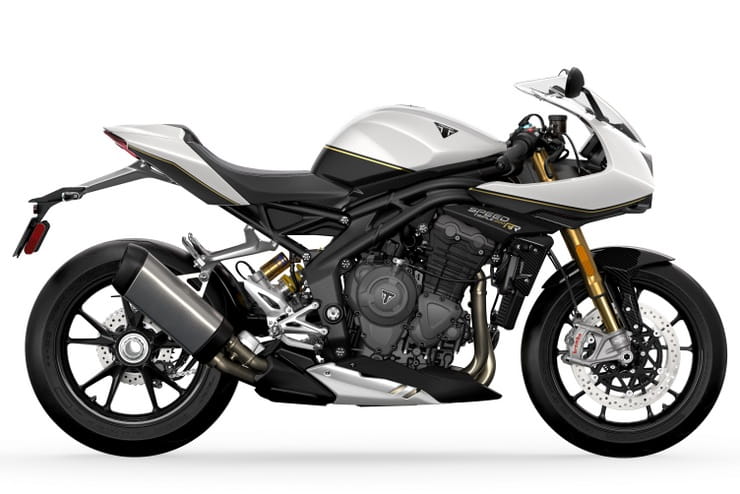 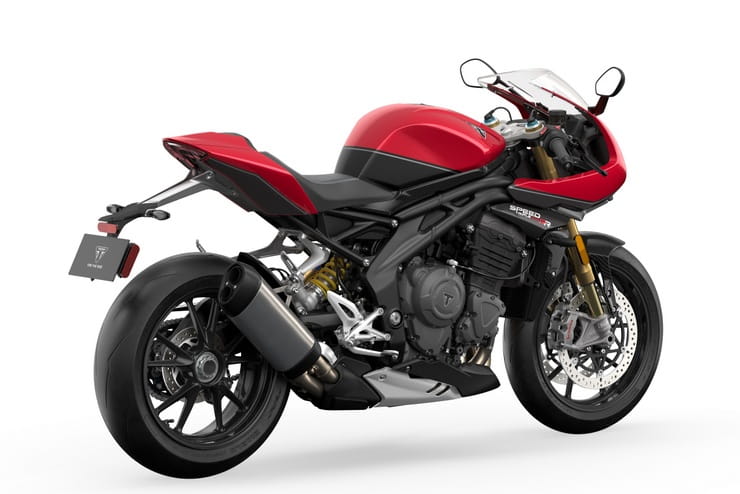 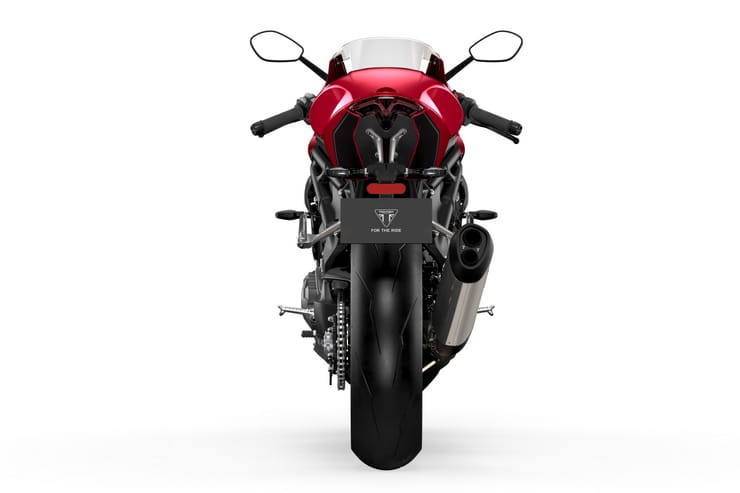 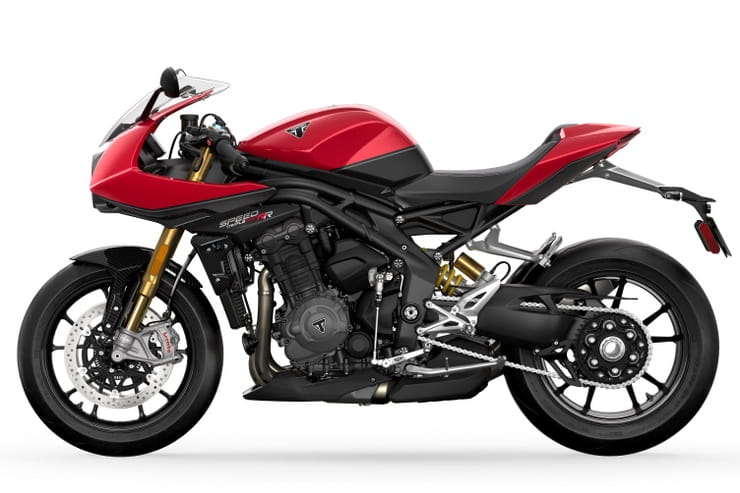 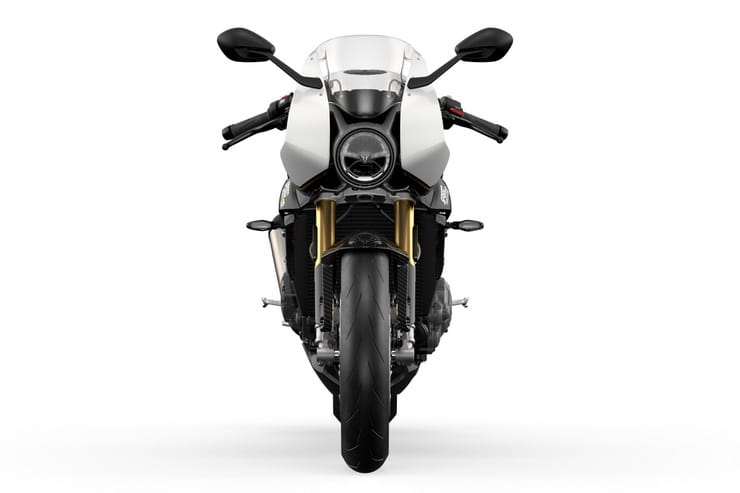 The Speed Triple 1200 RR is effectively a modern café racer; it’s the evolution of a naked street bike that’s sprouted low bars and a small fairing. But while the circular headlight nods at Triumph’s past it’s far from being a retro machine.

With the Speed Triple 1200 RS as its basis, most of the components are familiar. The engine is unaltered, with the same 1160cc capacity and no change to the state of tune, and the same aluminium frame and Brembo Stylema monoblock brakes. Even most of the bodywork, including the tank and tail unit, is shared. However, the RR gains even higher-spec suspension – replacing the RS’s Öhlins NIX30 43mm USD forks with the semi-active, electronically controlled units from the same company, with a matching monoshock to control the single-sided swingarm at the back. Pirelli Diablo Supercorsa SP V3 rubber acts as the middleman between that lot and the road.

Allied to the more extreme riding position, with bars mounted 135mm lower and 50mm further back, the result is a bike that comes close to being a superbike in spec but doesn’t carry the ‘race rep’ baggage in terms of image. 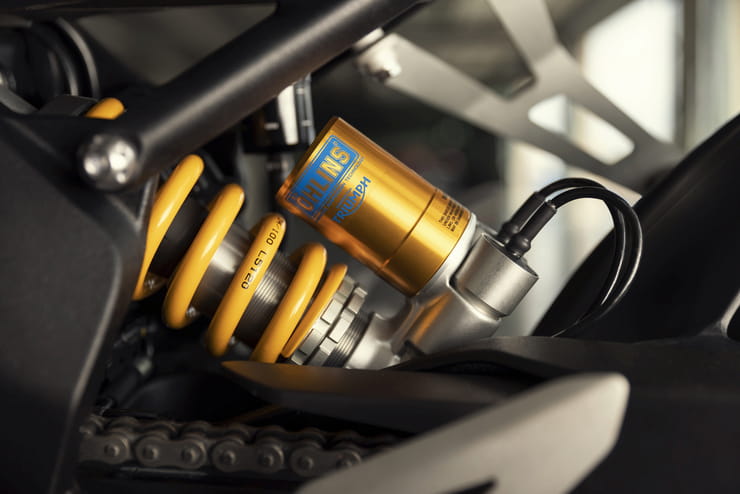 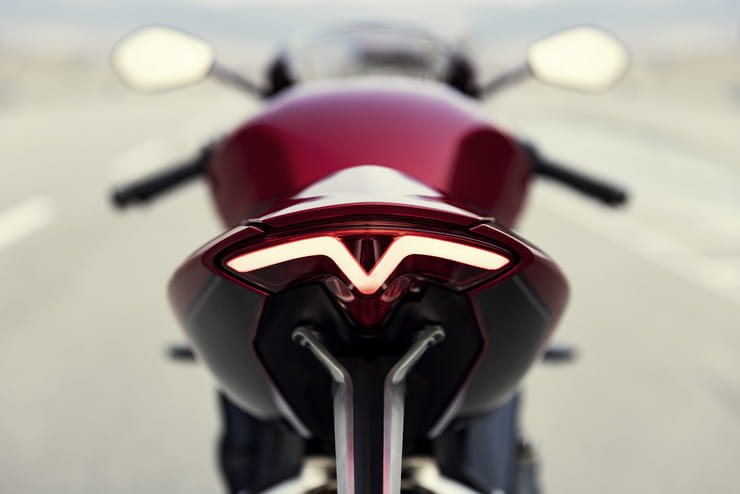 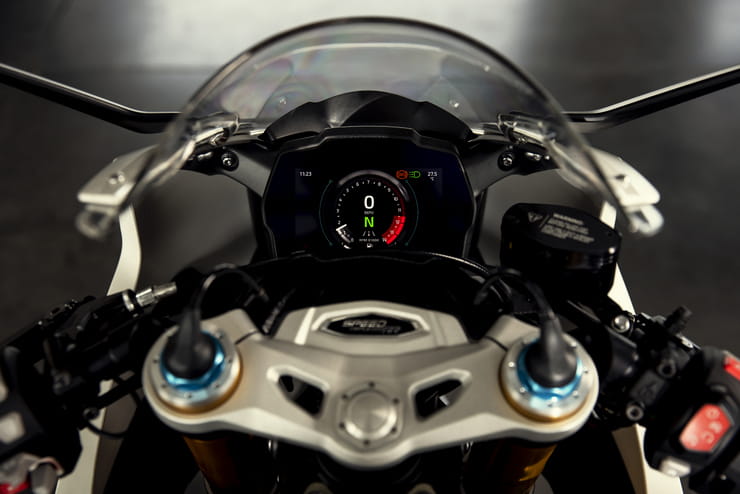 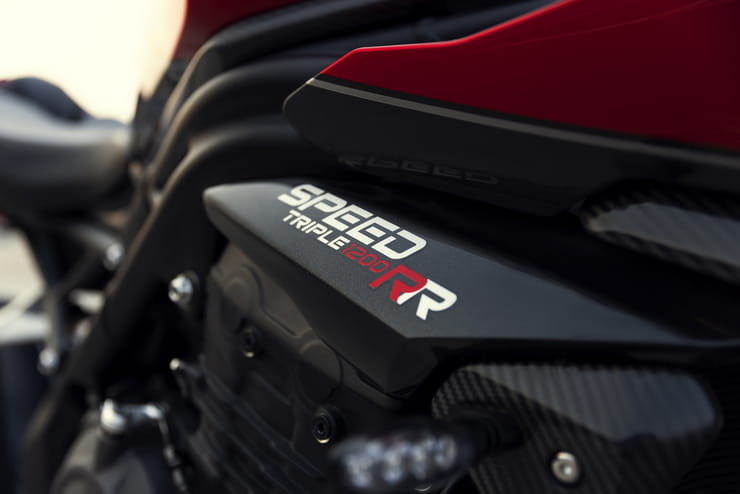 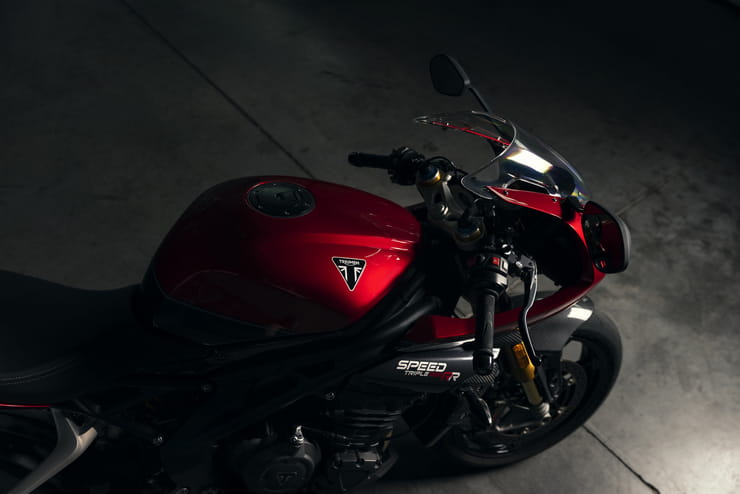 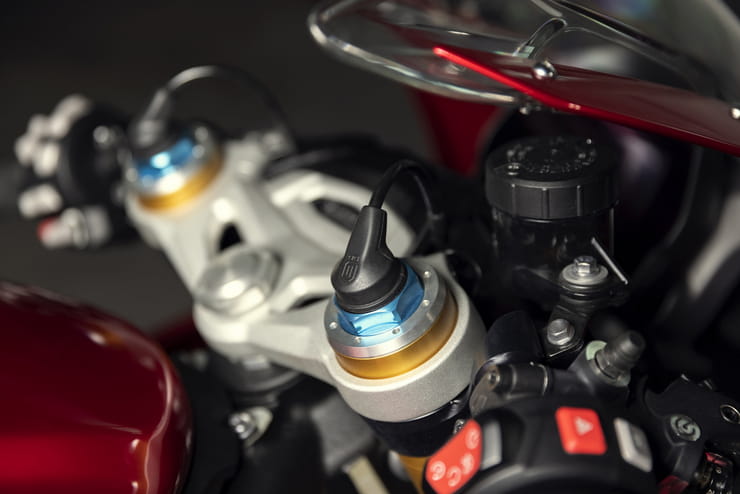 Performance should certainly be in that league. While 177.6bhp is around 30hp down on the latest 200hp-plus crop of litre superbikes, its still more than most could hope for a handful of years ago. What’s more, the bigger capacity of the three-cylinder engine means it arrives at a relatively low 10,750rpm and is bolstered by 92.2lbft of torque at 9000rpm. In a bike that weighs only 199kg wet, complete with a full 15.5 litre tank of fuel, that promises roll-on acceleration that might leave riders of more powerful, but more highly-strung, four-cylinder machines desperately hunting for a lower gear to catch up.

In terms of tech, the Speed Triple 1200 RR also keeps up with its racier-looking rivals, with the same package of electronics that debuted on the Speed Triple 1200 RS. That means a 5in TFT screen with smartphone connectivity for calls, music and navigation, five riding mode (road, rain, sport, track and rider-configurable), an up/down quickshifter, wheelie control, cornering traction control, cornering ABS and pretty much every other high-end piece of electronics you can imagine. There’s keyless go, which also unlocks the fuel filler and steering lock, and even Triumph’s GoPro integration and control system if you want to record rides for posterity. 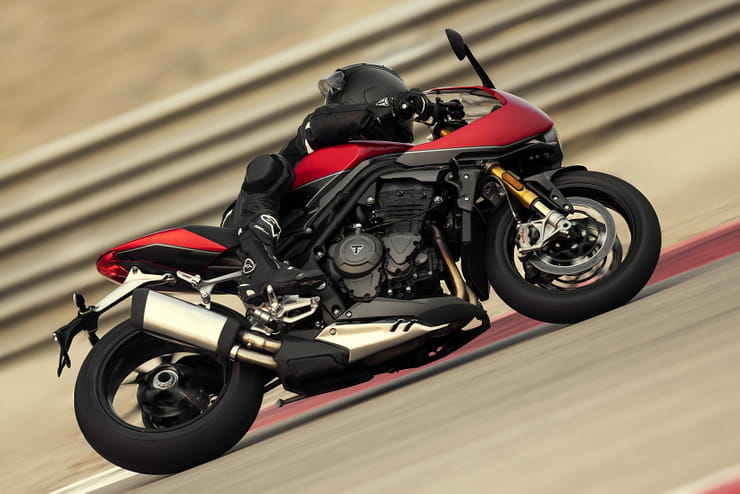 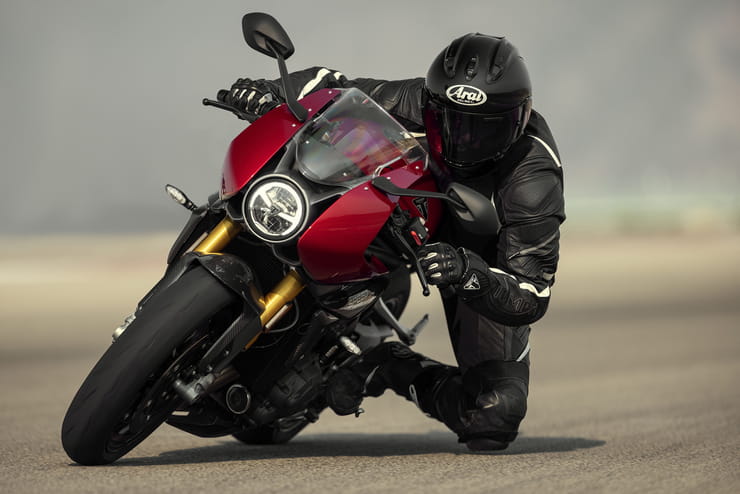 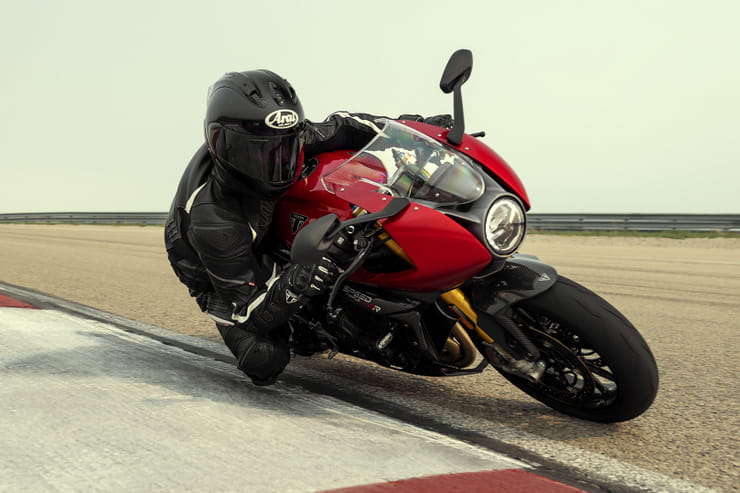 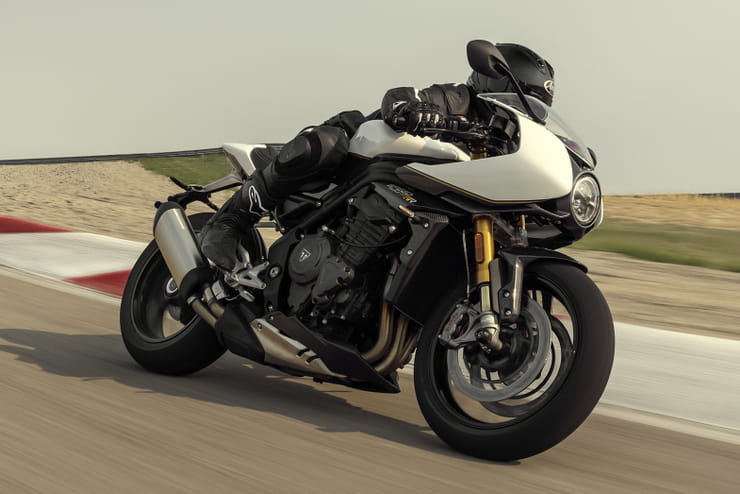 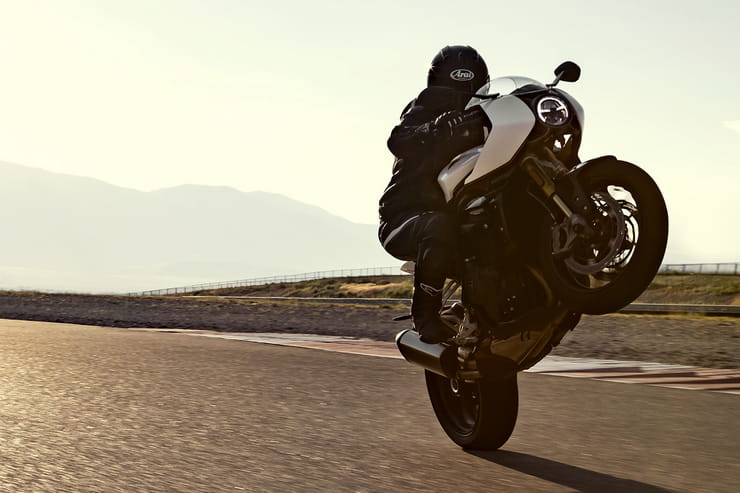 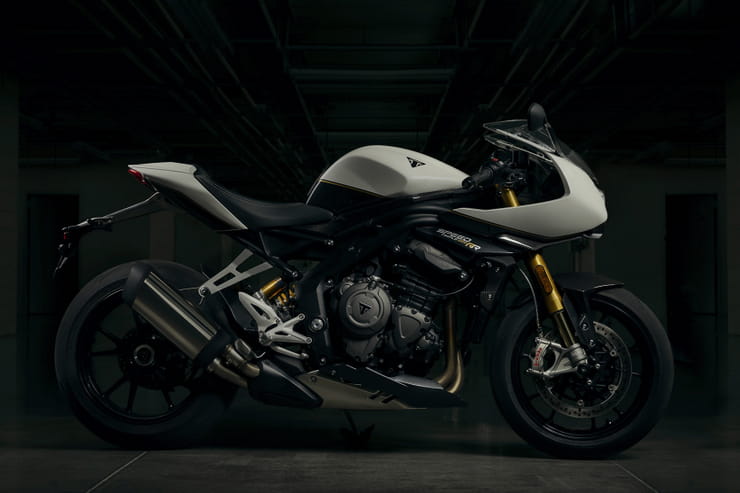 If you’re wondering how Triumph managed to add a half fairing and electronically controlled, semi-active suspension to the Speed Triple RS and only increase the overall weight by 1kg, the answer might lie in the use of carbon fibre for components including the front mudguard, fuel tank infill panels, side panels and fairing inners.

Those parts also add a high-end look to the bike, as befits a machine that isn’t cheap. On the road, the Speed Triple 1200 RR will set you back £17,950 when it goes on the market in January 2022; that’s a tag that puts it in the same ballpark as most modern 1000cc four-cylinder superbikes, although few at that level will be able to offer kit like the Ohlins semi-active suspension. That price is for the Crystal White and Storm Grey colour scheme whereas the Red Hopper and Storm Grey version is a further £250 on top.

The Triumph also offers a refreshing dose of practicality with details like 10,000-mile service intervals, and of course there’s a range of optional accessories including a tail pack and tank bag, heated grips and scrolling LED indicators. 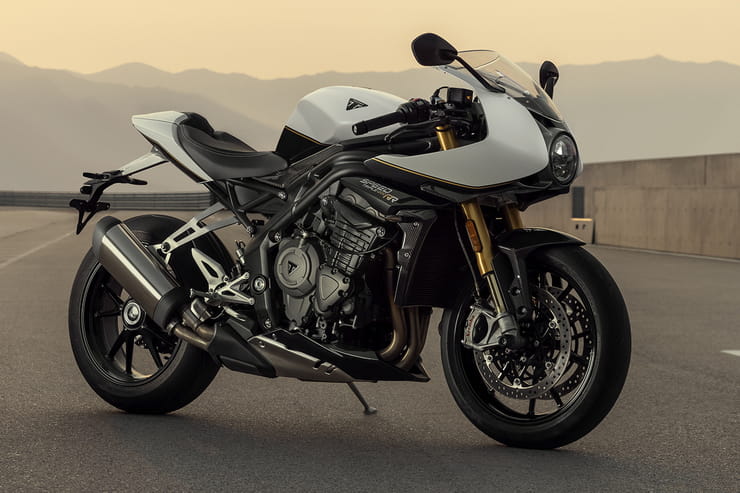 * CO2 emissions and fuel consumption data are measured according to regulation 168/2013/EC. Figures for fuel consumption are derived from specific test conditions and are for comparative purposes only. They may not reflect real driving results