When is a car a trike, or a trike a motorcycle? 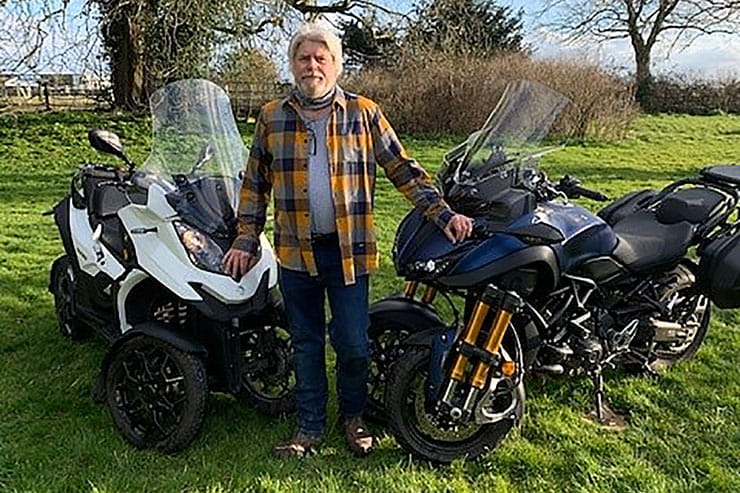 When delicatessen and wine merchant owner Jeff Folkins attempted to tax his Qooder Quadro4 he wasn’t expecting months of heartache and arguments with the DVLA.

“I bought it in July 2020 while I was in Germany, then rode it back to the UK over a week in August,” he told us. “Being exactly the same specification as the ones sold in the UK, and coming with its European Certificate of Conformity, I was confident that registering it as a UK machine would be easy when I got home.”

The Quadro4, or Qooder might have four wheels, but because the rear pair are less than 460mm apart (they’re 450mm), Type Approval deems them to be ‘twinned’, so classed as a single wheel. The Quadro4 is, therefore, a trike.

“It was a fantastic trip and the Quadro4 was great winding through the country roads of Germany, Austria and France. It also fared well on the Autobahns and Autoroutes when I had to go on them, including the mad dash I was forced to make across Northern France on the Friday before we locked down again at 4am on Saturday, though the 400cc motor didn’t quite have enough oomph to make for a relaxing high-speed ride.”

As soon as Jeff got home he registered for the government’s Notification of Vehicle Arrivals service (NOVA) to tell HMRC that he’d brought the machine into the UK.

“That was easy, but then I applied to the DVLA, which is when the trouble started,” he said.

“The original person handling the case declined my application because they didn’t agree with my ‘Trike’ application details. Little did I know that this was going to be the start of a long and frustrating journey.

“The V5 I was issued not only had all the classifications wrong, but the make and model too – the paperwork showed it as a Vertemati 630 with a 4x4 rigid body, and classed as a personal light goods vehicle! The only thing correct on the document was the colour and VIN.

“I pointed all this out, the DVLA apologised, and then reissued the V5 with the make and model corrected but none of the other details.

“I then began a process that involved writing to them at least five times, having our MP write a letter on my behalf to point out the errors and reaching out to Bennetts after seeing they’d reviewed it.

“The same response kept coming back; ‘we looked at a picture of your vehicle and see that it has four wheels so therefore our decision stands.’  At no point did they address the evidence of another V5 for the exact same bike, the legislative rules on wheel separation, or the European Certificate of Conformity. It was like speaking to a brick wall, though I must stress that everyone I spoke to at the DVLA was always very polite, helpful and friendly. They really seemed to want to help, but something (and no doubt COVID played a part) always seemed to block a common-sense approach to sorting this out.” 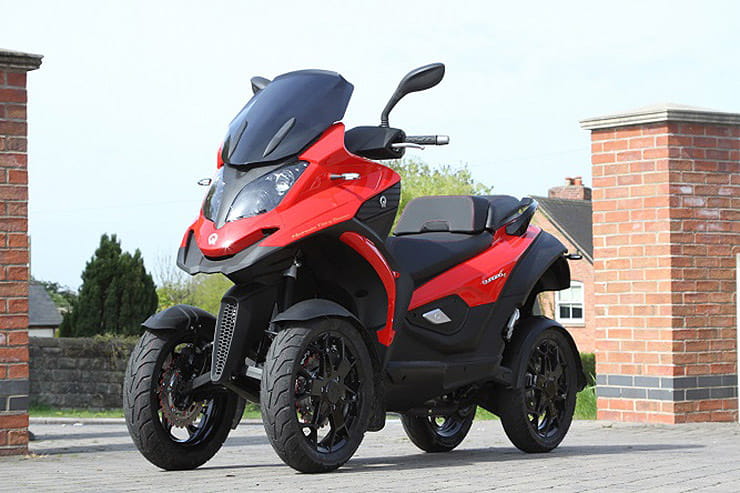 UK legislation says this is a trike, but the DVLA considered Jeff’s to be a light goods vehicle

When Jeff emailed us in October 2020 we tried to help with information on the legislation, but in February 2021 it was clear he was getting nowhere so we contacted the UK PR for Qooder with questions that we hoped would help resolve the issue. Unfortunately nobody replied after the email was passed to Qooder Europe, then emails to the PR started bouncing back.

We checked the relevant legislation, then contacted the DVLA for a statement regarding inconsistencies between type-approval and taxation classes.

Within a week, the DVLA wrote to Jeff again…

“I couldn’t believe it,” he says. “I hadn’t been in touch with the DVLA since you reached out to them, but I received a letter telling me that after they’d sought advice from the Department for Transport and the Vehicle Certification Agency, they could confirm that my vehicle does indeed have twinned wheels that they should be considered as a single wheel for the purposes of registration.

“Not only was my V5C amended, they even sent me a cheque for £150 ‘in recognition of the poor service I’d received.’ 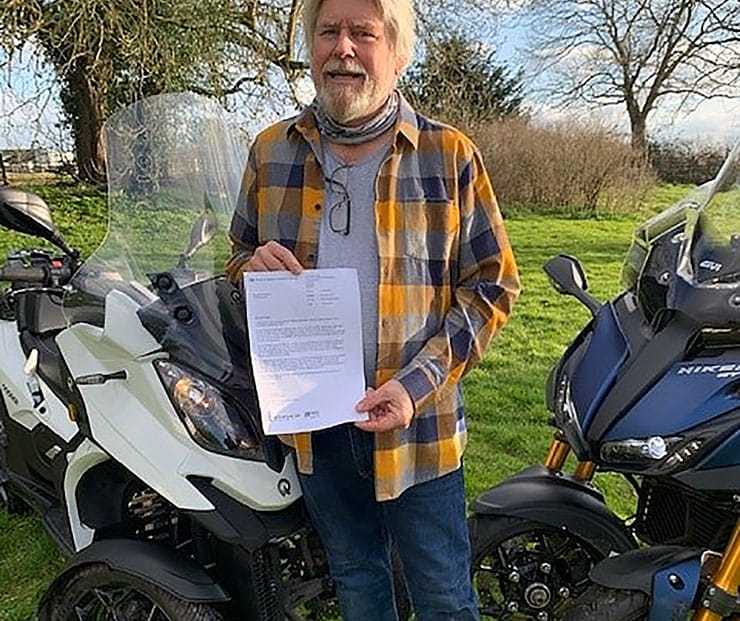 Cases like this are rare, and Jeff’s was no doubt made harder by the Coronavirus lockdown making communication among teams harder, but it’s great to see that common-sense has prevailed.

If you are faced with a dispute like this, we’d always recommend that you try to take a step back and gather your thoughts before each communication; triple-check your facts and present them in as clear and rational a manner as possible. Like Jeff, remain polite, but be persistent. And if you’re still not getting anywhere, be prepared to take it further.

It’d be easy to think of Jeff as something of a glutton for punishment though… “I started on a Vespa LX50 many years ago, then moved up to a Yamaha Tricity 125 in 2019 because I really enjoyed the ride and handling of the trike format,” he said.

“However, I soon realised (as I'd been told by friends many times would happen) that I wanted more power so I started looking at the Piaggio MP3 and Peugeot Metropolis. I was hesitant to upgrade but when I saw the Quadro4 I was hooked... I thought the concept and design was great and it seemed to get a pretty solid thumbs up in reviews.

“I got my full bike licence in October 2020, and when I started thinking about another European trip this summer (all being well), I decided it was time for something bigger and bought a Yamaha Niken.”

Fortuntely, there is no confusion around the Niken when it comes to road tax – the pair of front wheels are considered ‘twinned’ because they’re just 410mm apart, so despite some people thinking it looks like a trike, it’s actually classed as a two-wheeled motorcycle. Pedants might baulk at calling it a motorbike, but technically, that’s what it is.

“I don’t really understand my fascination with the three-wheel format,” said Jeff. “But I enjoy it and am happy to take on the ‘training wheel’, ‘stabiliser,’ ‘not a real bike’ banter I get.

“It's basically a Tracer 900 with a lot more grip and definitely plenty of unique curb-side curiosity. “It does help if you’re gregarious, because I get asked all sorts of question, which is really fun and from which I’ve learned a lot from other bikers.”

Why does everyone hate the Niken?