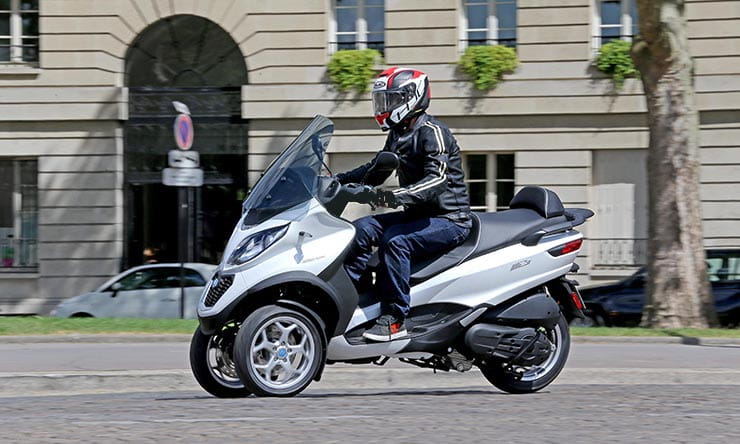 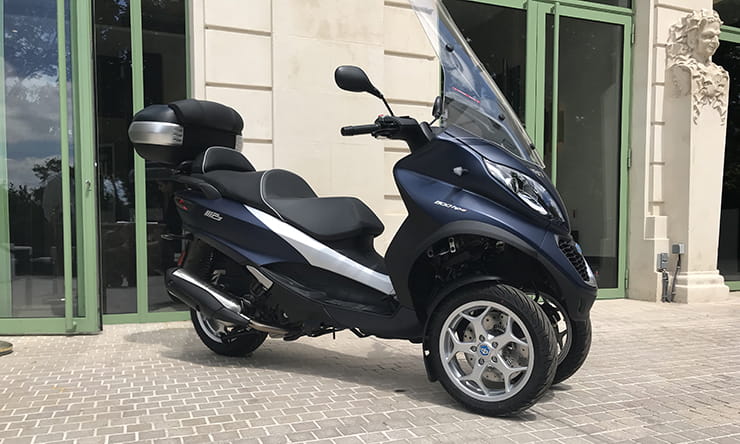 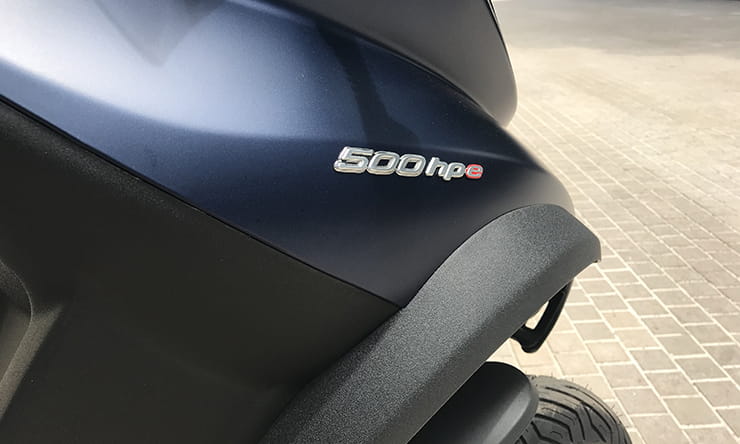 With maxi-scooters taking a massive chunk of the sales market in Europe and Piaggio’s MP3 owning a whopping 70% share of the three-wheeled scooter market, it’s no surprise that the 2019 updates to the 350cc and 500cc models are difficult to spot. If it ain’t broke and all that!

For 2018, the subtle updates are designed to make the bikes not only compliant with the latest, stringent Euro4 regulations but also make them more powerful, attractive to the ear and more fuel efficient.

First things first, if you are reading this expecting me to state that Piaggio want this bike to tempt two-wheeled lovers over to the world of three wheels – I’m not. The firm makes clear that is not their aim so, ciao. These bikes are primarily targeted at car drivers who want to shed the pitfalls of car ownership without going through the costly, ever more difficult and confusing motorcycle licensing laws in UK and beyond.

And it’s a good job they don’t market this on the same level as a two-wheeler, because it doesn’t ride like one. In some ways – on the streets of Paris at least – it’s even better. 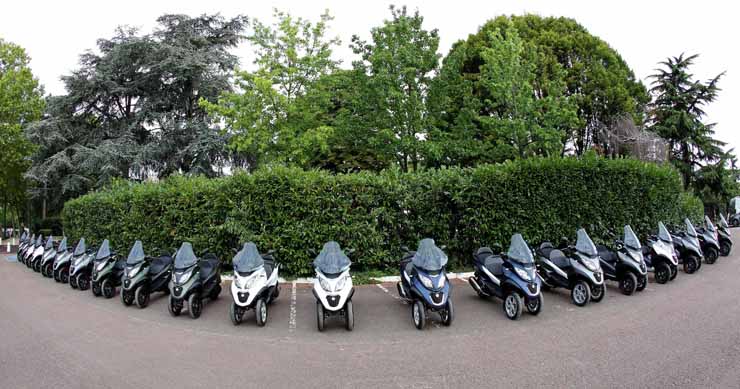 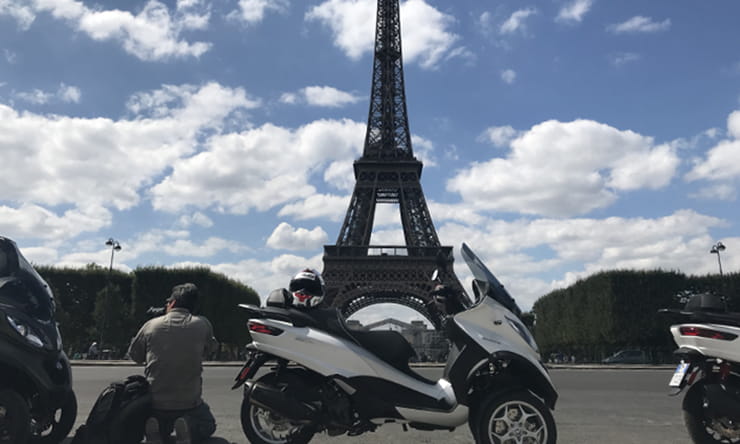 The 500cc bike’s updates are more subtle with revised cam timing, a new airbox and exhaust system. The end can is now like any other you’d see on a big tourer and looks cool enough but still sounds like a scooter. Some of the funky Parisians lapping the city had Akrapovic slip-ons their older MP3s and they sounded cool – damn you, Euro4! 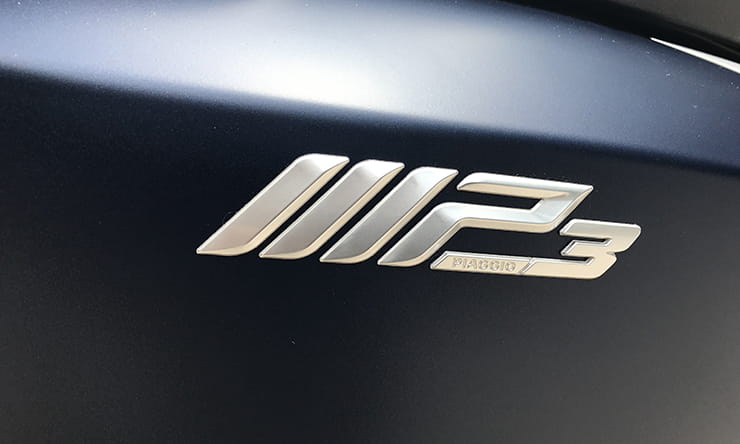 Switching up the ratios is taken care of by the Durex of the motorcycle gearbox world, the fun killing CVT (constant velocity transmission), which does it’s best to hide any and all of the extra ponies that Piaggio has coaxed from beneath the bodywork. Look, I know why it’s there and it’s designed to make a bike more accessible, but do they have to make the experience of riding a bike feel so bland? On the plus side, the new Piaggios gain a CVT that’s sat in an oil-bath which they claim makes the bikes much smoother and more comfortable. Yeah, they nailed that, but on the MP3 500 Sport at least I’d have much preferred a more aggressive launch from the lights, rather than red shock springs and wavy discs…

With no opportunity to test the MPG on the launch the only figures we can go by are Piaggio’s claimed economy figure of 4l/100km (58mpg) for the 500 Sport and Executive and 3.9l/100km (60mpg) for the 350 Sport. With a 12-litre tank on both bikes that gives a theoretical range of about 300km of town riding. 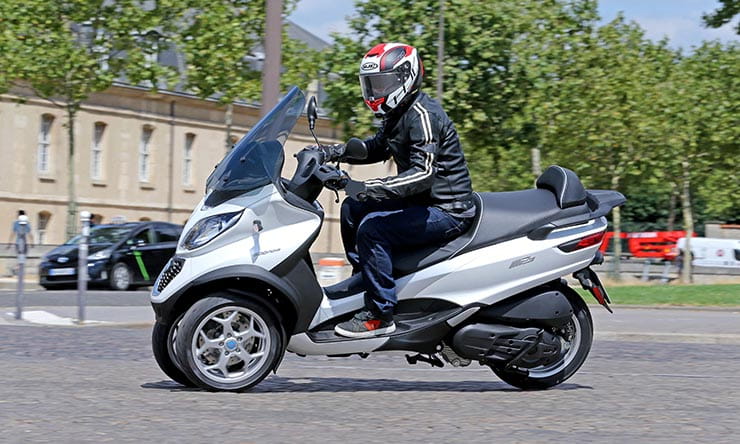 It’s fair to say that when you think of locations to test the handling of a motorcycle, central Paris – Arc de Triomphe – wouldn’t have been my first choice. But this is the place that tatty MP3s with Tucano Urbano leg covers seem to be the weapon of choice. So, I donned my commuter gear and headed off into the fray, with its mad taxi drivers and weird roundabouts where people just seem to drive at you. Constantly.

Fair to say that the first 20 minutes of the launch weren’t going well and it took a while to get into my Parisian groove, but once I did the MP3 started to grow on me. On the dusty and cobbled French streets, the grip from the front end is huge, so much so that on one of the photo stops I could feel the back end of the bike fishtailing. It’s strange because I could tell it wasn’t that the back end didn’t have enough grip, it’s got tonnes. It’s just that the front end overpowers it occasionally. It’s all good, not scary, it doesn’t snap or move in a way that would upset a new rider. It’s just letting you know it’s there and it hasn’t brought as many mates to the party as the front end.

The suspension is plush over the speed bumps and ruts in the cobbled streets even if you can feel the front wheels chatter when the bike’s cranked over. And the thing is, if one of the wheels is pattering as it tries to find a bit of grip the other isn’t. It all adds to a stable front end that, while not un-crash-able, as we were warned by the Piaggio big-wigs before the ride, does allow you to do things on a maxi-scoot that you’d never consider if it didn’t have that third wheel.

To comply with EU regulations around motor tricycles, the MP3 is fitted with three brakes and a handbrake. The two handle bar mounted brakes work in the same way as any other twist and go scooter – left brakes back wheel and right brakes the front wheels, while you also have the option of using the foot brake mounted on the right hand foot-board.

If I’m honest the ‘normal’ anchors on the handle bars felt vague with less braking force from the front brakes if used in isolation, with the ABS cutting in extremely early. I found that strange; you’d think the weight transfer onto the front under braking and the 50% more friction surface and tyre footprint would make it more effective than the rear, but it’s not. The rear brake is both more progressive and effective at slowing the bike, but even that isn’t the most effective way of stopping the MP3. The foot brake is ferociously good and even caught me out the first time I used it. The G-force pushed my weight forward so much that it actually increased the braking force I was putting into the system. It’s not a bad thing, a bike that stops this quickly in a city that’s moving as quickly as Paris is a handy thing to have. I called upon the footbrake numerous times in the four hours that we were riding and, once I’d got used to the brick-wall levels of retardation, enjoyed the ability to go from 40mph to zero in a matter of metres. 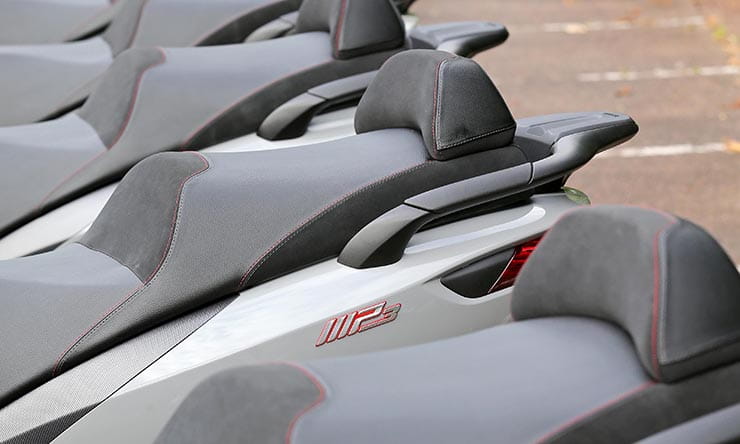 It wasn’t the longest launch I’d been on in terms of miles covered – I think about 60/80 miles in four hours, but I found both MP3s to be extremely comfy, the dash and control ergonomics are well sorted and will suit anyone from 5ft 5in and up. The seat is armchair-like in its plushness and the screen does a good job of keeping the windblast at bay – 60mph cruising with visor open was no problem.

Only thing I did find was the reach to the floor was a bit of a problem. I’m 5ft 7in and struggled to start with. It’s not so much the seat height, which at 790mm isn’t high at all, it’s the fact your leg/legs have to straddle the wide running boards which meant I could only ever get one foot on the floor and had to lean the 256kg 350 and 275kg 500 over quite a bit to do that. Don’t worry, though, there is a solution: Roll Lock. Piaggio has developed a system to keep the bike upright at the lights and it works, perfectly – but more on that later. 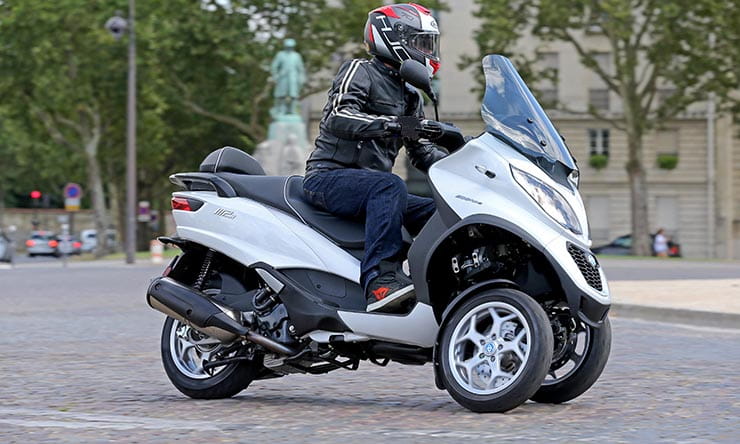 Along with the ABS as mentioned earlier the MP3 gets a trip computer, predicted range and traction control. The MP3 500 also gets Standard and Eco riding modes, which I did flick between and if I’m honest, I couldn’t really tell the difference.

The MP3 500 Executive also receives a funky looking TomTom Vio sat-nav mounted neatly in the centre of the handlebars while the sports substitutes the TomTom for wavy discs and red Kayaba gas shocks.

Under the seat each bike has a cavernous compartment with space for two-full face helmets with room to spare. For trips further afield, Piaggio offers 50 and 37 litre top-boxes and panniers with 42 litres of carrying capacity - more than enough for a weekend away for two people. 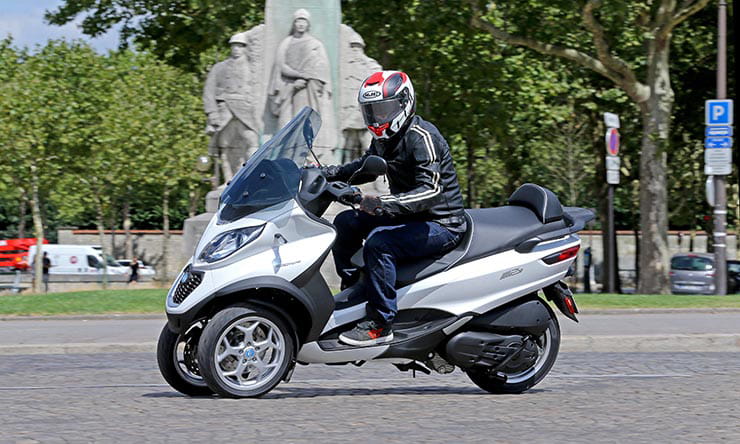 What is Roll Lock and how does it work?

Roll Lock is Piaggio’s answer to the conundrum of ‘How do I stop my €450 suede moccasins from getting soaked at the lights when it’s raining’. And the answer: take away the need to put your foot on the floor.

Roll Lock holds the bike in a upright position and locks it there. It sounds like laziness but actually it’s a clever system that works very well. The Piaggio design team advised it’d take a couple of days to master but in truth it took me about 30 minutes.

The system is activated by pushing a lever on the right handlebar. If you are travelling at below 5kph, and the bike is not leant over by more than a few degrees, the Roll Lock system activates a third front brake caliper that grips onto the front suspension and holds it firmly in place. Two more actuators lock the front forks solid to prevent the bike from leaning on the springs either way and presto, your €450 shoes are saved from an early bath.

Even by the end of the day I wasn’t 100% comfortable using it, a tentative foot held to one side would be my safety net in case it didn’t engage. But I could pretty much ride around Paris for an hour or more without touching my foot on the floor. Seriously, expensive footwear aside, if you are short of leg and find straddling a big maxi-scoot’s footboards a problem, this could be the answer. 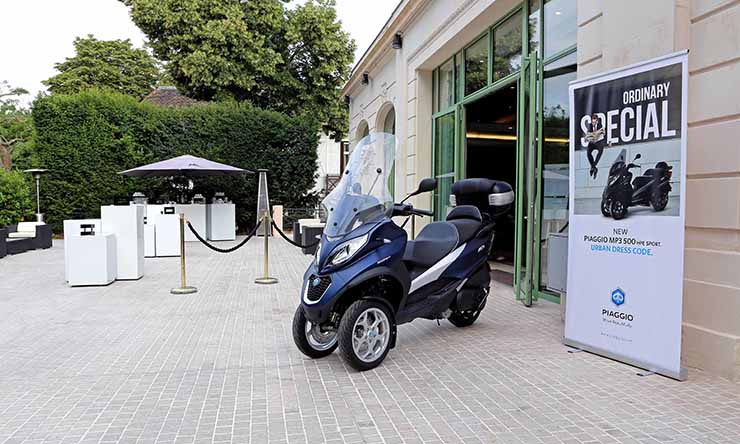 I think there are better ‘bikes’ out there. It still doesn’t corner enough like a two-wheeler to tempt me over to the other side but, as a big, comfy, clean and fun mode of transport, for somebody who has never experienced the thrill of hooning a quick bike on its ear through some fast sweeping corners, it’ll seem like the best thing since sliced baguette.

Three things I loved about the MP3…