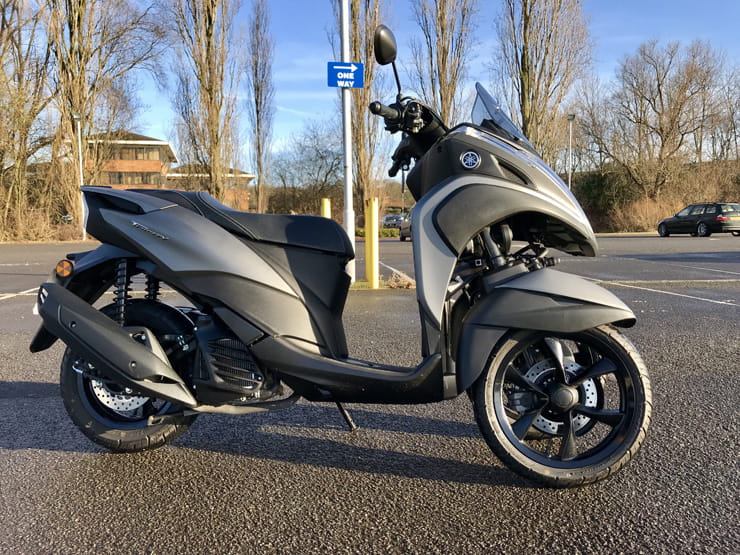 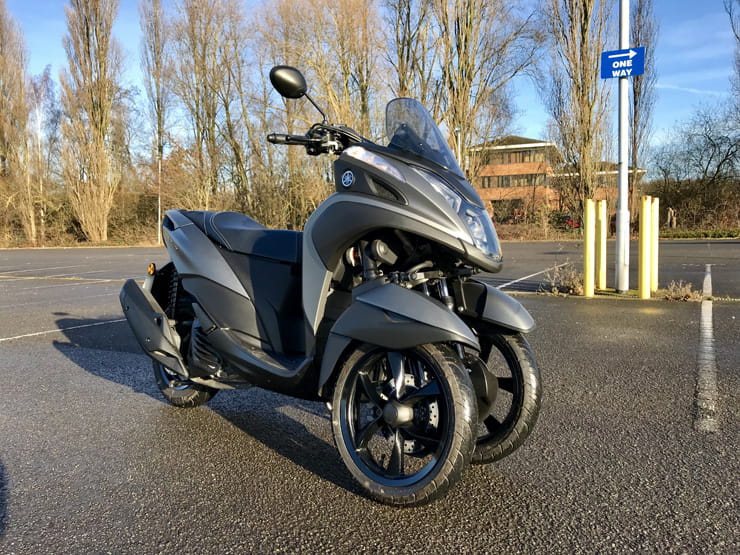 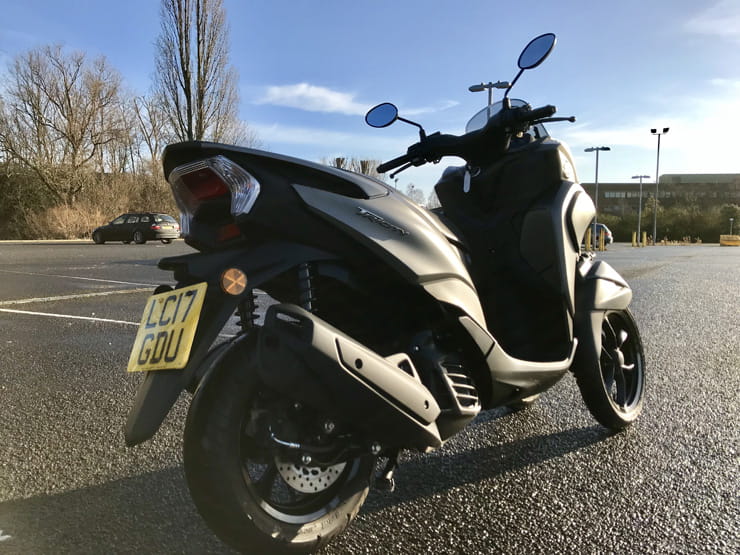 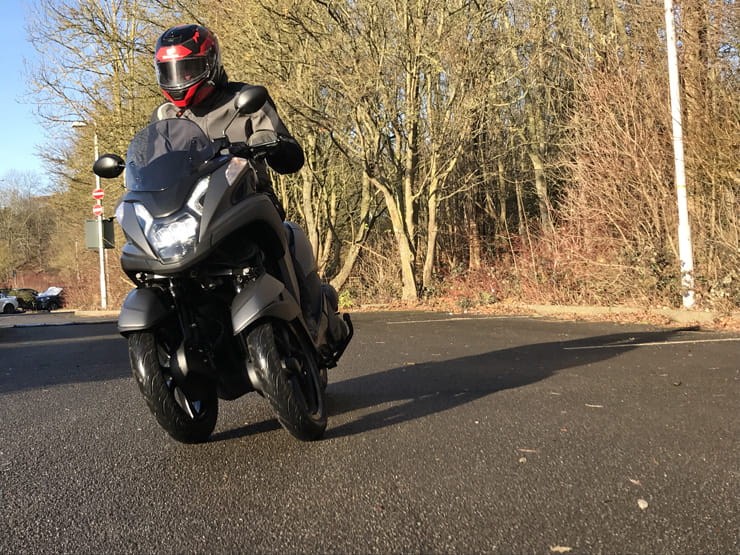 The corner ahead is one of my favourites. In July, on a sports  bike, it’s a challenging, tightening 70mph right-hander. Today, I’m approaching at 55mph on a three wheel, 125cc scooter, keeping further away from the puddles by the kerb than normal because they’re frozen. My fingers have been numb for the last half hour, the Yamaha’s gauge says two degrees, I can’t feel my head and my whole emotional being is focused on my about-to-explode bladder. Weirdly, I have no intention of braking and no need to either. I throttle back ever so slightly and then drive through the corner in absolute confidence, nudging 60mph, running as far out to the ice-white roadside as I dare. What a bike.

Twenty minutes later, sat in my driveway, in late December’s freezing weather, having completed our 58 mile lap of favourite-but-frozen backroads, one thought is dominating. This 125cc scooter might just be the best bike I’ve ridden all year. The last 70 minutes might have been as much about survival as fun, but two-wheeled winter surviving has rarely been so enlightening, if only because it’s given a tantalising glimpse of just how good Yamaha’s new 850cc Niken three wheeler is likely to be.

Just out of interest, once I’d warmed back up, I took my TDR250 up the same roads. For those who can’t remember, the TDR is a lightweight, two-stroke supermoto with interesting weight distribution that makes it handle particularly well on wet roads or slippery surfaces. I got less than five miles before turning back. The TDR felt unpredictable and nervous in comparison and I wasn’t going to risk dropping a bike I’ve owned and cherished for the last 14 years.

And before you dismiss the Tricity as ‘only a 125’ or any of the other big-bikie-boy clichés, consider this. 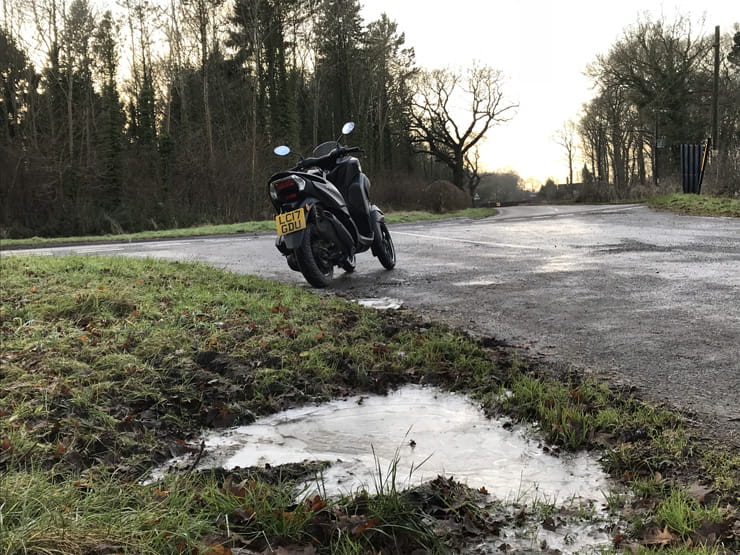 My journey home from the office is 53-miles of national-limit A-roads. Most of the time that means long queues of cars stuck behind a truck doing 50mph. Earlier today, in the same freezing conditions the Tricity took just six minutes longer than a BMW R1200GS did last week. Narrow enough to squeeze through any normal bike-sized gap (which surprised me, but the Tricity really is no wider than a normal bike), the Yamaha purrs along at 58mph, cruising past the tin-tops, with enough time for you to stare in the windows and feel sorry for the seething occupants inside. If only they knew that they could be home this quick and this cool (cold actually, but that’s the downside) and this almost-invincible for £3772 on the road, there would be riots at Yamaha dealers.

Adding a third wheel to a 125cc scooter doesn’t turn it into a sports bike. Although, it’s no co-incidence that the Tricity was developed by one of Yamaha’s MotoGP race engineers, which helps explain, why despite the additional engineering, it weighs less than the conventional 125cc X-Max. The wheels are still scooter-sized and the tyres are still hard commuter compounds. What the extra wheel gives is a confidence that you never usually feel on a bike like this. The twin front hoops are an inch smaller in diameter than the conventional X-Max, but Yamaha claim that the Tricity has almost twice the front grip available. Unlike other three wheelers the Tricity still behaves like a bike because the leaning mechanism is light and the tilting operates independently of the suspension.

It feels like a bike too, leaning as easily and coming back upright too. Before the cold set in today I was doing things on twisty roads that a scooter shouldn’t be able to do. The confidence through corners…in December… is staggering. The other three-wheelers I’ve ridden feel heavy and clumsy. They take a few miles to get used to and always feel like something built for car drivers, scared to lose the final wheel. 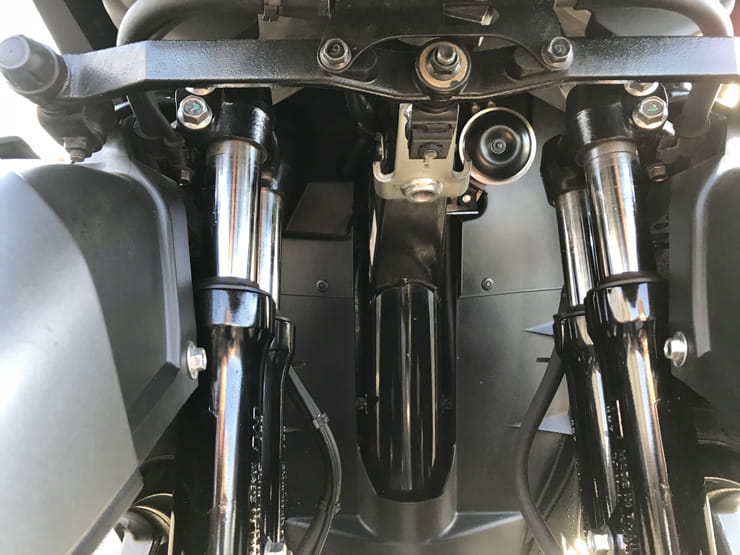 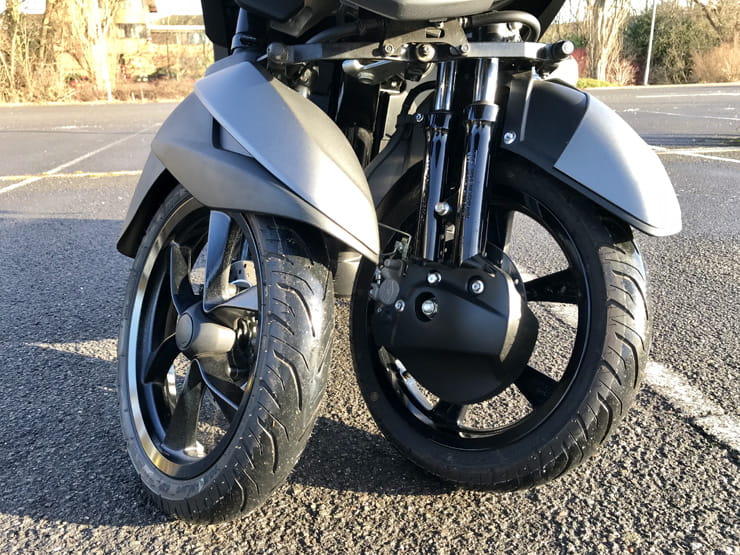 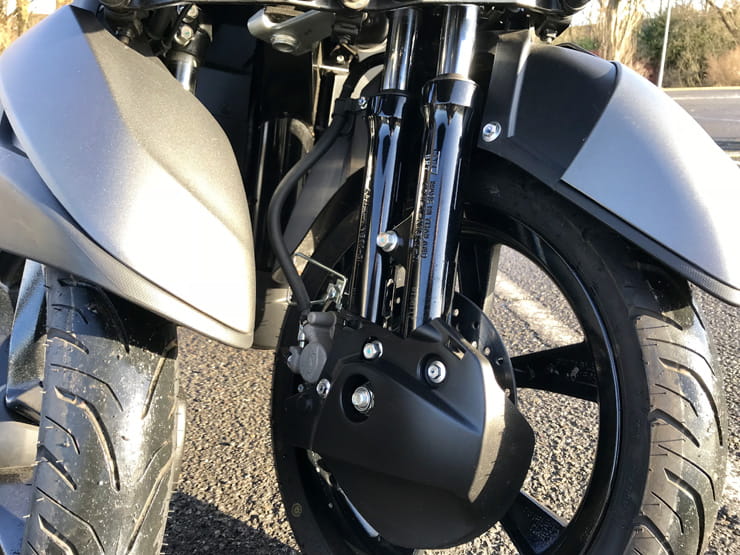 Yamaha’s tech is completely different. It just feels like a motorbike, only better. Much better. That’s better as in stable, confident, grippy. It’s not uncrashable… so I’m told and, on ice, where there is zero grip, then 100% extra is still zero, so don’t expect miracles.

But on days like today when there’s maybe 25 per cent as much grip as usual, the Tricity makes that more like 50 per cent, which turns winter nightmares into a wet summer day and I can cope with that. And, I can only imagine how good the Niken will be on a wet summer day. 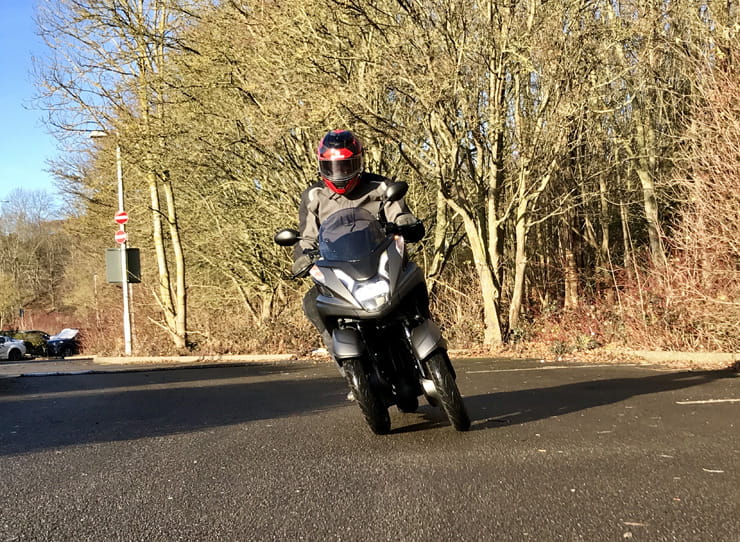 Cornering isn’t the only thing that benefits from the extra wheel though. Braking is superb, with a whole lot more confidence, stability and power available from the extra disc on the extra wheel. This year’s bikes also have ABS as standard on the linked system (pulling the left lever operates the rear disc plus some of the front, pulling the right one adds the rest of the front brakes).

And the ride quality over bumps – something that scooters usually fall down on is enhanced too.

Away from the front end, the Tricity is simply a bloody good scooter. The 12bhp liquid-cooled engine, borrowed from the NMAX scooter was revised for 2017 and now has variable valve timing for smoother power delivery. Nippy off the line, quiet, with linear power delivery and enough oomph to cruise at 55-60mph and top-out somewhere just under 70mph. Even being thrashed it returns 120 miles per tank at around 85mpg and, in more gentle urban use that rises to 103mpg and 160 miles per tank. 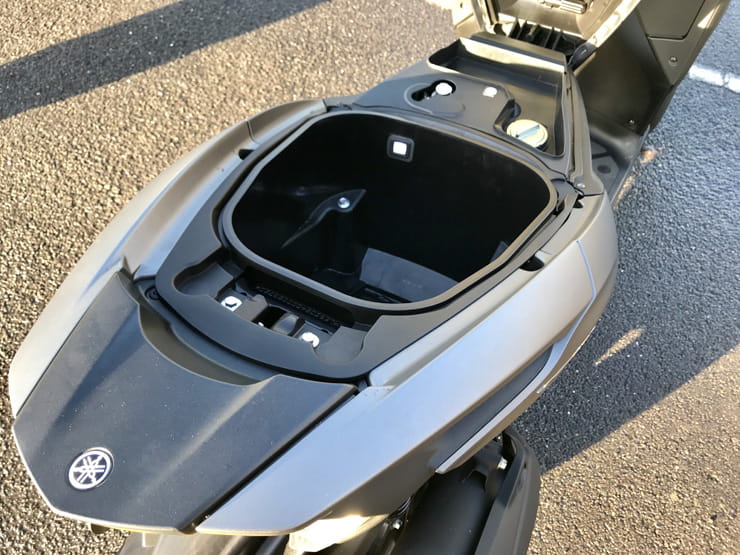 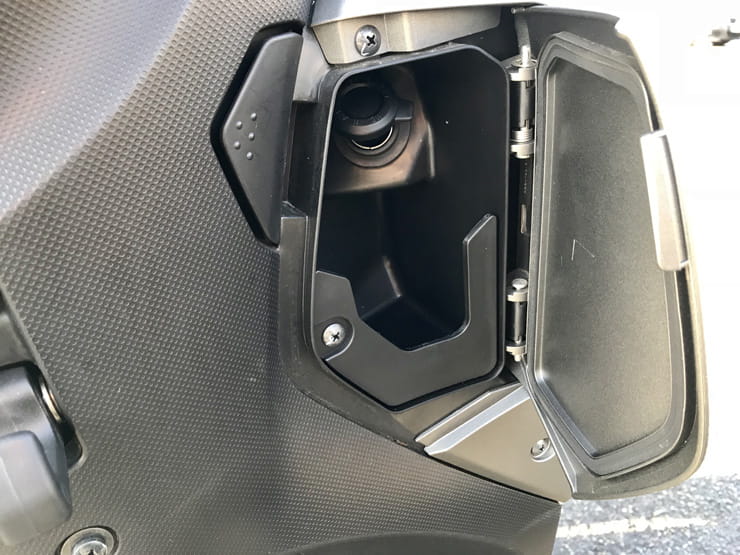 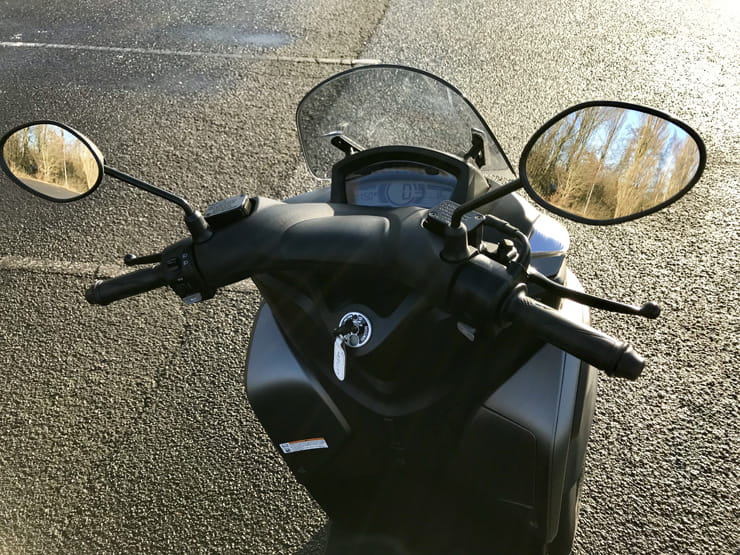 The seat is comfy for 90 minutes at a time and takes some of the harshness out of the simple rear suspension. Under the seat is storage space (with illumination) for a crash helmet or chunky lock and there’s a shopping hook and small compartment (with 12v power supply) in the leg guards.

But there are plenty of other scooters that do such things equally well. What makes the Tricity special is the DNA of a company that always pushes boundaries and almost always gets it right.

This three-wheeler really does improve on the cornering performance of a two-wheeled scooter at least. It’ll be fascinating to see how it works on a bigger, more powerful motorcycle. 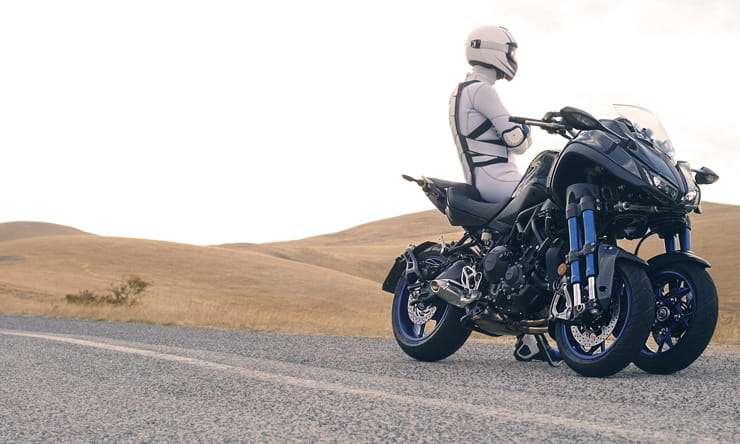 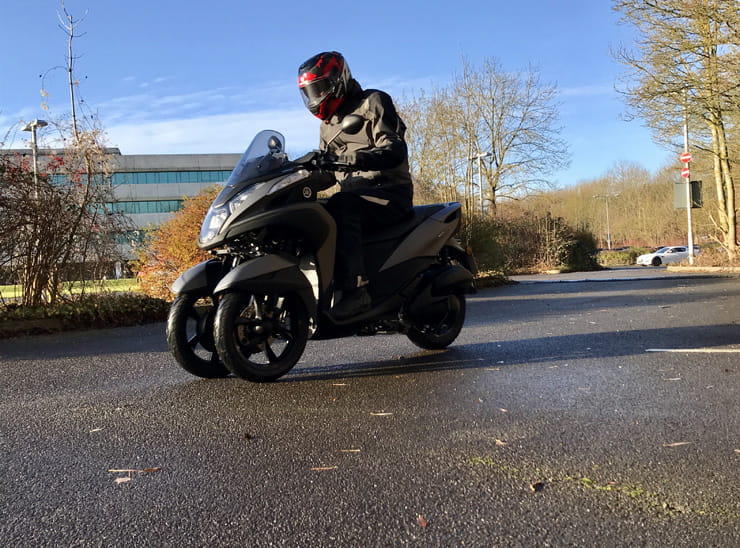