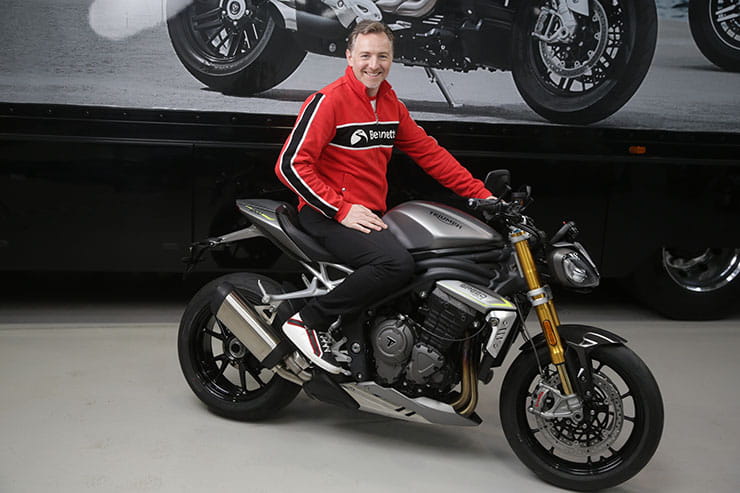 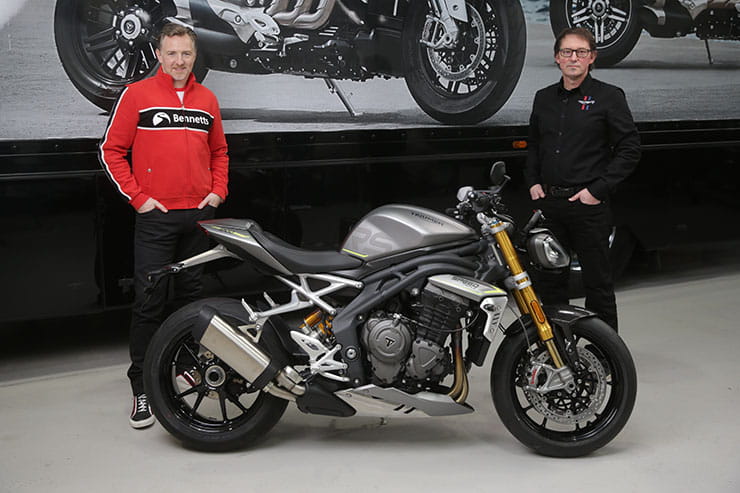 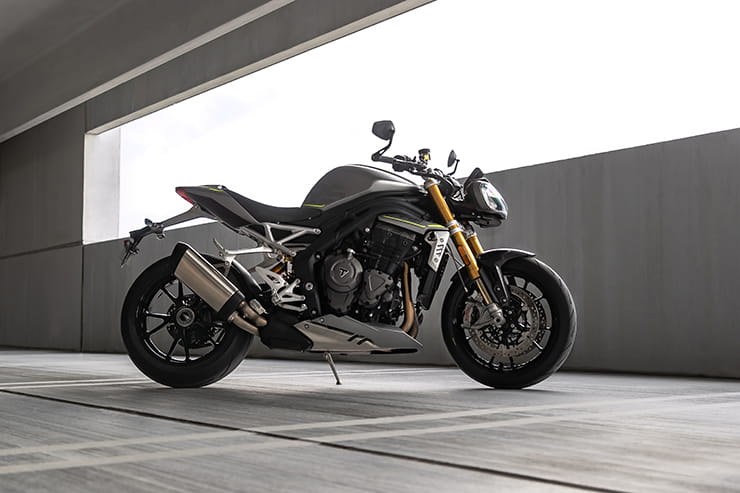 The new Triumph Speed Triple 1200 RS for 2021 has entered the room like Sandy does at the end of Grease. Everyone sits up and looks at the distinctive and much improved version. Instead of the leather-clad, gum-chewing blonde, we’ll focus on the newest generation of Triumph’s 27-year-old model which has been refined, reworked and comes with oodles of swag for the new year with an impressive power-to-weight ratio and tech-per-£ ratio too.

The entire motorcycle is new, a fact Chief Engineer Stuart Wood reiterated in our exclusive interview below, “it’s a completely brand-new bike, every component is new, engine and chassis - every nut, bolt and screw.”

Let’s start with the headlines. ‘Supernaked’ is a peculiar term that is still an embarrassing one to use around your dad, but they’ve been around for near enough 30 years and you can reel back to 1997 (which was actually the second generation) for the purpose-built first factory version when Triumph rolled out the Speed Triple T509 – the original and definitive streetfighter, so claims the British marque. Interestingly, Triumph have never used that Supernaked expression, instead focussing on where the bike will fit – it’s a purpose-designed naked street sports motorcycle aimed at the road while perfectly capable on track.

The last update of the Speed Triple was introduced in 2018 and used the 1050cc 3-cylinder engine making a peak power figure of 148bhp but the new machine ups the ante big time. A 26% increase on power-to-weight courtesy of a scale-tipping 198kg wet (10kg lighter than before) with a maximum power output of 177.5bhp @ 10,500rpm. But how? Easy, because it has a new 1160cc, 3-cylinder, Euro 5 compliant engine – the most powerful and torque-rich Speed Triple engine ever, even the engine has been on a 7kg diet. Torque is up by 8NM to 125NM @ 9,000rpm which offers a big improvement in the mid-range, anywhere from 6500rpm in a bike that will love to be revved.

7 of those 10kg have been save from the engine alone, with development assistance from Triumph’s Moto2 involvement – there’s no dedicated race team at the Hinckley firm so those who worked on the race version of the 765cc triple are also responsible for this new 1160cc road-focussed variety. The power-to-weight ratio is best demonstrated with the acceleration figures: the 2021 model is 1s faster to 100mph and 3.8s quicker to 140mph than the 2018 bike, and bear in mind that’s only a 10s journey!

With revs, especially from a triple, comes noise and the new side-mounted, low level 3-into-1, single silencer has a new exhaust valve with a new sound too. But noise aside, the performance of a larger capacity yet lighter engine with its more compact gearbox and new faster acting quickshifter (both up and down, with a new variable position sensor) will power the Speed Triple 1200 RS from standstill to 100mph a full second faster than the 2018 model, and 3.8s quicker to 140mph. Like Grease Lightning you could say. OK, I’ll stop now. Avoid those kind of acceleration tests and the estimated return will be healthy 50.2mpg from the 15.5 litre tank, thus giving a theoretical range of 170 miles until you’ll be walking.

It’s also worth noting the exhaust system has been fully optimised for performance and sound and therefore an omission from the official accessory range is an alternate silencer/end can. 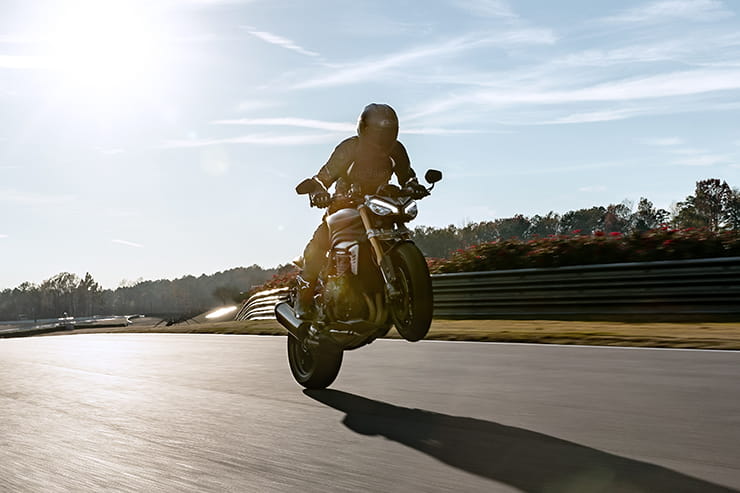 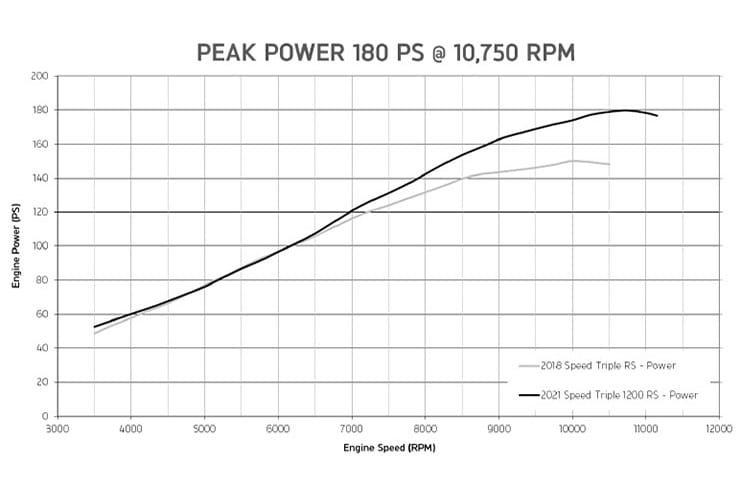 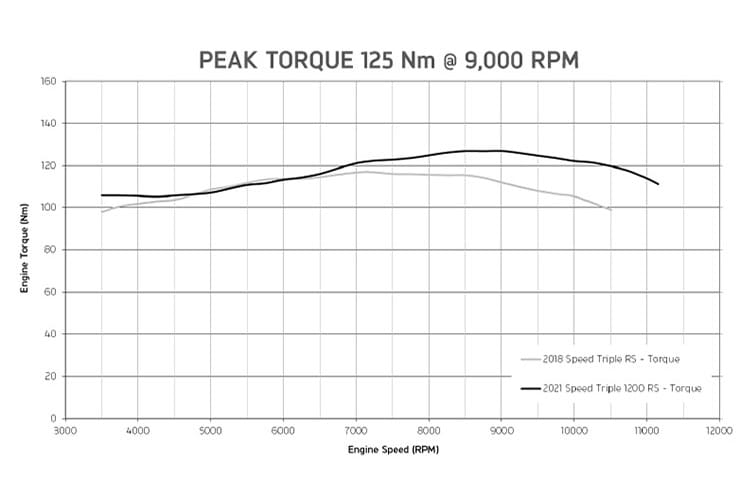 There’s no point in having a more powerful bike if its uncomfortable or the ergonomics haven’t been fine-tuned to suit the rider. The 830mm seat height is a fraction higher than before but the overall narrower machine compensates for the 5mm increase with an easier standover. Plus, the riding position is more aggressive with footpegs that have moved inwards to improve ground clearance, a 13mm wider handlebar and a seat that promotes sportier riding. The new cast aluminium frame is 17% lighter than before while weight distribution has moved lower (courtesy of the exhaust placement no doubt) and further forward.

The wheelbase of the bike remains the same as the outgoing model so while the engine capacity is up, the overall dimensions including a newly ‘stacked’ 6-speed gearbox are more compact. Therefore, a longer swingarm and newly positioned pivot offer further enhancements to stability and control. 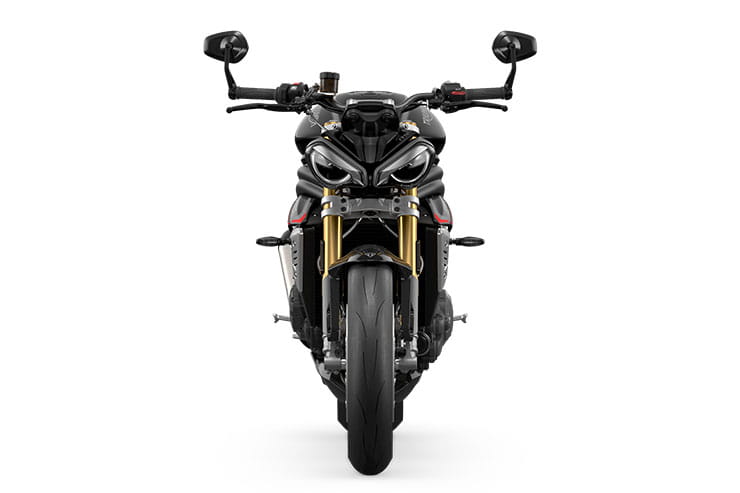 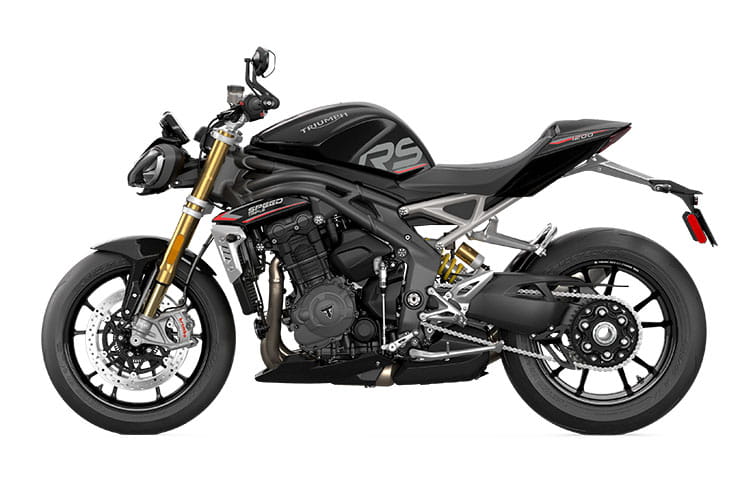 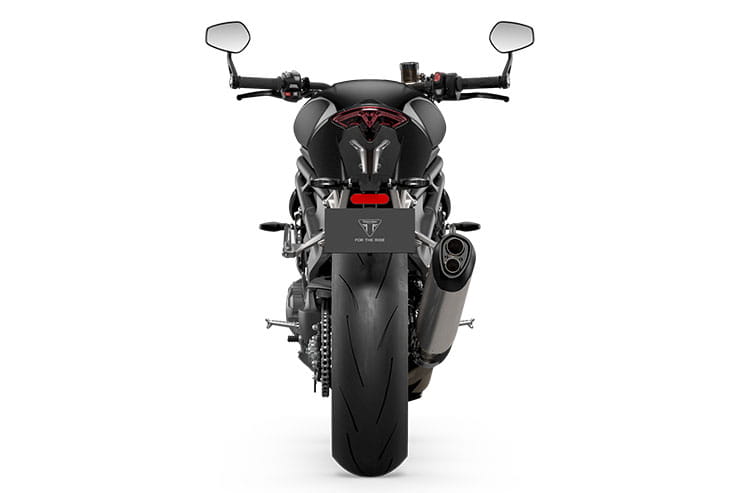 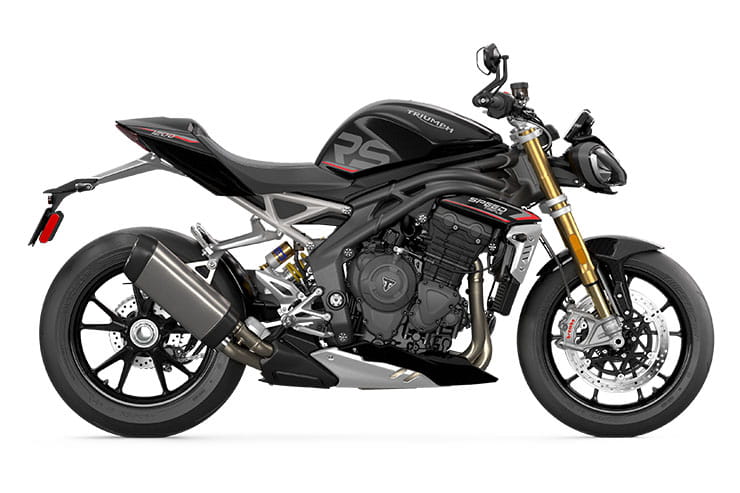 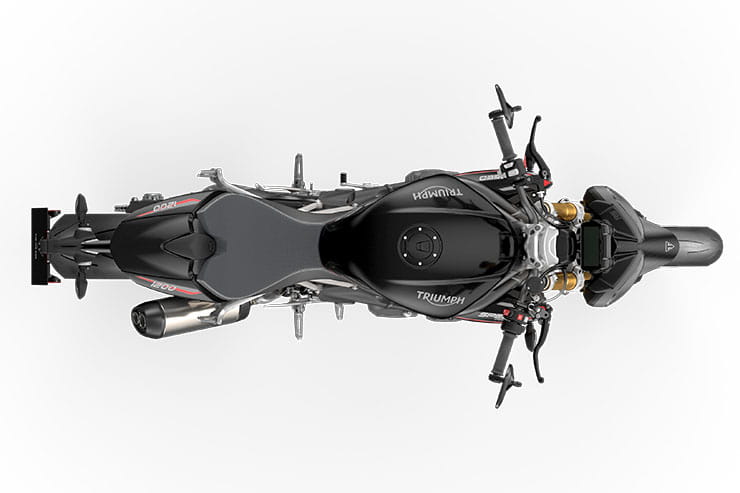 We’ve alluded to the price versus level of technology and the high-end componentry on offer with the news Speed Triple 1200 RS, and the list begins with suspension and brakes with the familiar and still premium Öhlins and Brembo combination. Fully adjustable, though not electronically (to keep the price point down), Öhlins 43mm NIX30 USD forks are matched with the Swedish firm’s TTX36 monoshock to keep the Metzeler Racetec RR tyres connected to the ground (though factory-approved Pirelli Diablo Supercorsa SC2 are an option) and offer a smooth ride. Brembo Stylema monobloc calipers assist the twin 320mm front discs do the stopping from the front while a single 220mm disc is at the rear. A neat touch is the Brembo MCS span and ratio adjustable brake lever too.

The switchgear is familiar with the five-way joystick on the left-hand bar being the main point of operation and, just like the previous generation Speed Triple, the buttons are thankfully backlit. Why doesn’t every bike come with this?

They control a new 5” TFT instrument and menu operating system with its updated interface with two themes to choose from. And among the options to fiddle with for complete customisation are:

A keyless ignition and fuel cap system plus all-LED lights and self-cancelling indicators are updates to the new model while a lightweight lithium-ion battery aids with the weight-saving with a 2.3kg drop alone. 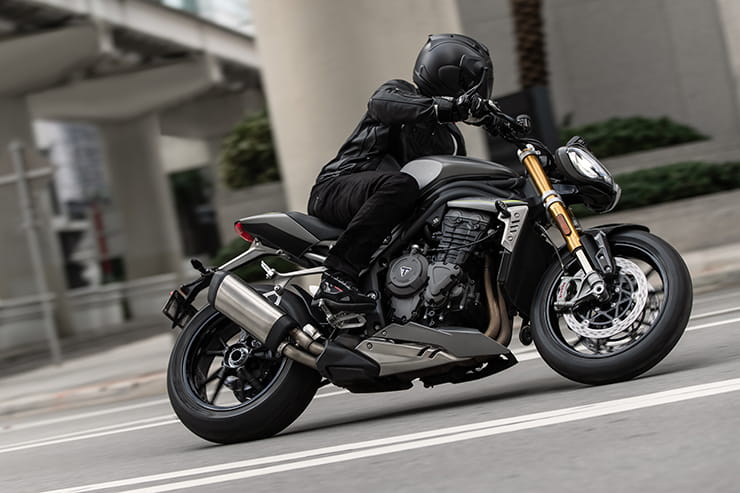 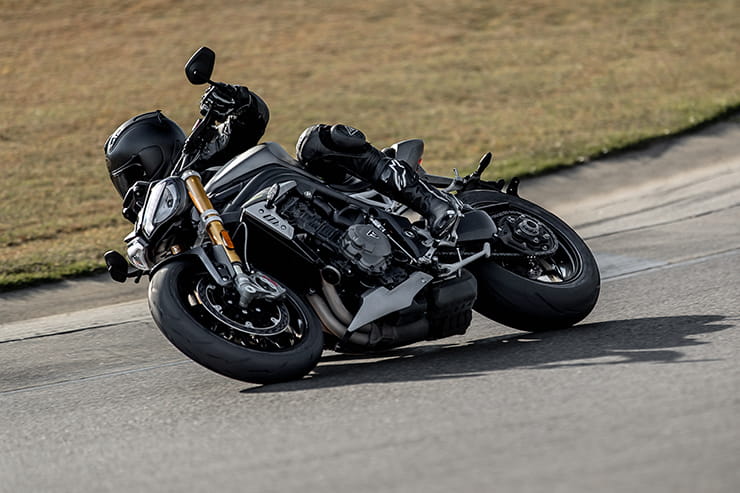 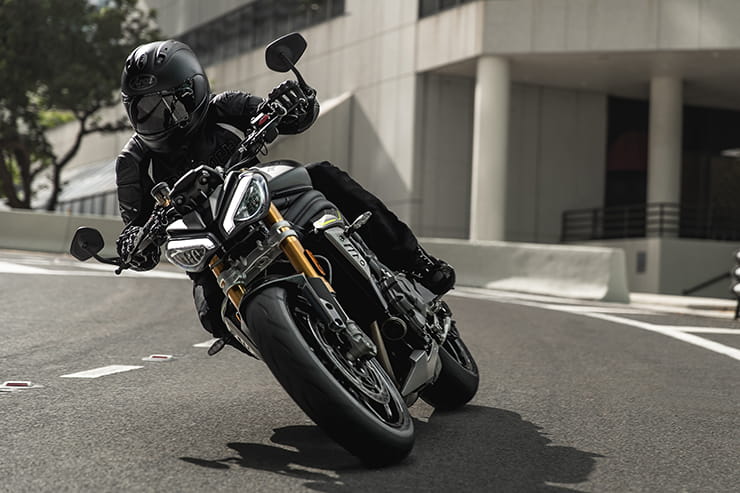 We’ve already touched on the lack of an official Arrow or Scorpion end can to further enhance the sound and performance because Triumph are so confident in the standard version. However, the impressive list of technology, protection, comfort, luggage and style-related accessories is up at 35 and includes fly screen, heated grips, TPMS, scrolling indicators and matching luggage to name but a few. Included on the bike as standard are neat touches such as a carbon fibre front mudguard and interchangeable pillion seat/cowl as standard.

The UK price for each of the two paint options (Sapphire Black or Matt Silver Ice) is £15,100 and it will be available in dealerships at the end of February 2021. Service intervals are at 10,000 miles (16,000km) while the two-year warranty comes with an unlimited mileage cap. And there’s the option to extend.

If power and torque alone float your boat, and if Top Trumps is your game then the Speed Triple 1200 RS would sit alongside the likes of the BMW S 1000 R (165 bhp) and Yamaha MT-10 (158bhp) in the Championship when compared to the Premier League fighters such as the Ducati Streetfighter V4 (205bhp) and MV Agusta Brutale 1000RR (205bhp). Then again, should a super naked just be compared on power? Of course not. Brakes, suspension, electronics, rider aids, screen, comfort, steering, weight, noise, looks and that overall mmmmm feeling. Oh yeah, and price, dealer back-up, build quality, warranty, running costs, spares and accessory availability too.

And it’s a good job we’re all different in terms of what we want out of motorcycling, otherwise the world would be a lot duller. Triumph’s new flagship naked is packed full of top components that are so well pieced together further demonstrating the ever-developing build quality associated with the British brand. On paper, the 2021 model sounds as if it’ll ride and perform better than the previous generation even with all those sporty and electronic credentials, and the Speed Triple has always been a charismatic, classy and distinctive motorcycle, so we’ll let you know with a comprehensive review as soon as we can. 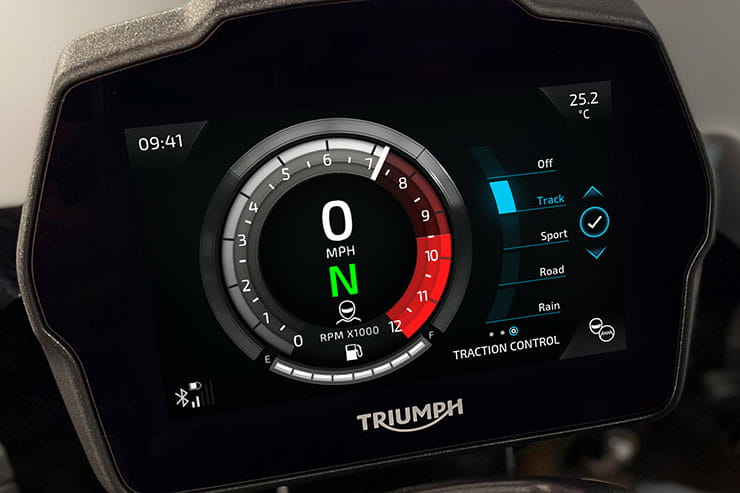 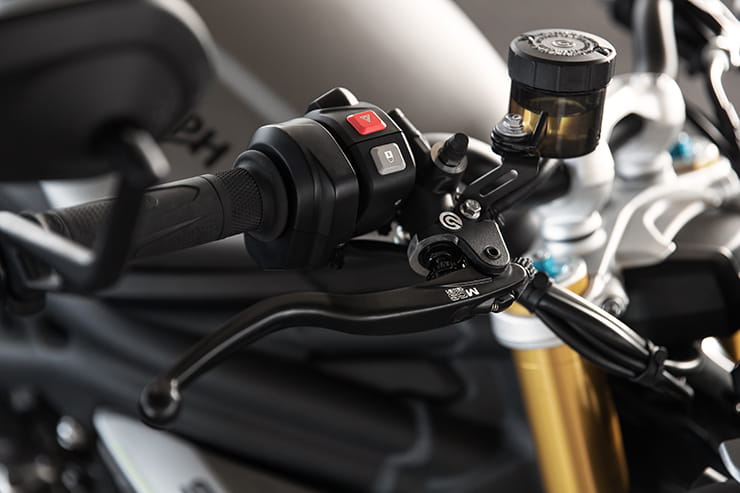 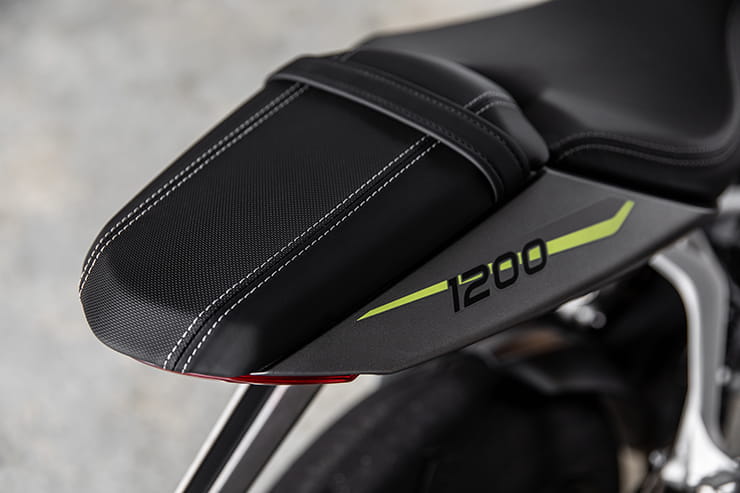 Will it be the one that you want? The one you want. Oo-oo-ooooo.